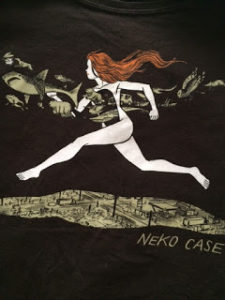 Detail from Neko Case tour t-shirt – is she
leading an escape from the zoo?

However, something about the title, the cover featuring Neko’s blurred image swimming in a dark, blood red backdrop with serpents scrawled in white highlights, plus a positive review in The Age were sufficient for me to pick up a copy. And I’m glad I did because I found a collection of beautifully performed, intelligent songs that continued to reveal new riches with each listen.

So when she was added to the Zoo Twilights bill, a series of 14 concerts over 14 days at the Melbourne Zoo, we decided to pick up a family ticket and take the kids for an alt-country family picnic.

Her show at the Corner Hotel had sold out very quickly, but I was happy to be outdoors on a balmy evening. And besides, she is the perfect fit for a gig at the zoo with songs that seem written with a menagerie in mind: Lion’s Jaws, Fox Confessor Brings the Flood, City Swans, The Tigers Have Spoken, I’m an Animal, Wild Creatures, Maybe Sparrow (okay, so not a creature normally associated with zoos, but drop a hot chip on the ground and they emerge soon enough).

Our youngest son, Declan, ditched us when he was invited to attend the Melbourne Victory v Melbourne Heart soccer derby at AAMI Park, so our other son, Oscar, brought a friend along. Of course they chortled over the combination of a singer from a band called The New Pornographers plus another band called Dick Diver, the coalescence of entendre titillating their teenage minds.

Animals are inherently territorial creatures, marking out their own space in a variety of ways. Some with a circle of urine, some through the threat of violent retribution, and then some with elaborately spread blankets and jackets. It’s fair to say that on this first day of Autumn all of these habits were on display at the zoo.

Through no particular plan we’d arrived right as the gates opened, so we joined the snaking queues of people all labouring like pack horses under their camp chairs, rugs, eskies and picnic baskets. Once in we found a reasonably large patch of unoccupied grass and spread our rug, knowing that other friends were joining us later, but there was sufficient room.

Our sudden occupation of this vacant space, however, threw the woman lounging nearby in her low-slung chair into a panic and she began to defend her territory like the Ukrainians in Kiev fearing imminent Russian invasion. There was much tut-tutting about her friends that were still to join her and much staking of the unoccupied zones with various picnic trappings. Quite possibly she laid a few landmines. Likewise, the man immediately in front of us warned of other people soon to arrive that would need to fit in.

Of course we politely ignored them and simply spread out our rug – there was plenty of room after all – and perhaps I’m a old-fashioned, but I believe that being there trumps not being there with respect to staking a spot. This woman, I thought, would be quite welcome to join her friends up the back if it turned out there wasn’t room for all of them here when they eventually showed.

Local band Dick Diver was up first. I was keen to see Dick Diver as they had been receiving glowing praise for their second album, Calendar Days, and I also quite liked the albums of other bands in which its members feature; Lower Plenty and Boomgates. I’d even talked them up as a good reason to arrive early.

Their performance, however, didn’t quite match my pre-gig anticipation, but not all of the problems were necessarily of their making – the sound was overly loud and the mix was woefully unstable, even allowing for the breeze that had picked up.

It’s fair to say that the sub-genre with which they are associated – dolewave – doesn’t privilege vocal virtuosity or even prowess. Songs are often delivered without overt expression, but even so, the singing on this night was uneven. I didn’t mind so much, after all, I knew what I was in for, but my family and friends were looking at me suspiciously and wondering what I had gotten them into. Of course given that the mix was a bit of a mess, it’s possible they simply couldn’t hear themselves. I still quite liked some of their songs and I’ll listen out for their next record.

The contrast was made all the more striking when Neko Case and her band took to the stage. The mix was crisp and clear, and the instrumentation varied, but mainly the shared vocals of Neko Case and Kelly Hogan were simply sublime. There was an effortless smoothness to their harmonies that was like honey.

Wearing culots and Converse sneakers, Neko is either over the idea of being a rock goddess or was simply treating the gig as a casual rehearsal for her forthcoming and, let’s face it, somewhat more prestigious shows at the Sydney Opera House and WOMAD. Or she was simply letting her flowing red hair do all the fashion heavy lifting for her. Kelly Hogan was wearing a billowing orange kaftan thing while the rest of the male band members exhibited varying degrees of dirty denim and hirsuteness.

What they may have lacked in costume design, however, they more than made up for with slick, tight playing. Jon Rauhouse’s virtuosity was on full display as he alternated between lap steel, guitar, banjo and trombone at various times. And the between song banter between Hogan and Neko was witty and playful and included shout outs to the big cats, a small flock of ibis that flew overhead and the bugs that inevitably swarmed around the lights and band members as dusk turned to dark.

Opening with This Tornado Loves Me, the rest of the set was mix of some of the more upbeat numbers from the new album; City Swans, Bracing For Sunday, Night Still Comes, Man and Ragtimeplus a few of her other staples, Hold On Hold On, Nothing to Remember, Maybe Sparrow, Set Out Running and Calling Cards.

Nearly Midnight, Honolulu, perhaps the central song from the new album was left out, which was disappointing given its dramatic intensity and haunting frailty. It packs a solid a capella punch, but given the large number of children in the audience, it was probably understandable and unusually thoughtful that Neko spared them the song’s hurtful exhortation to ‘get the fuck away from me!’ although it seemed to be a sentiment she was aiming at the insect life that swarmed in a halo around her.

Perhaps they really were driving her crazy, because the band unexpectedly vacated the stage after barely 50 minutes. They returned for an encore and played Maybe Sparrow and Ragtime for which they replaced the song’s brass motif with scat vocals that we hummed as we walked past the newly awoken nocturnal animals and picked our way through the car park at the unexpectedly early hour of 9.00pm.

I’m sufficiently old to appreciate brevity in a performance. I hadn’t gone to see Springsteen at AAMI Park the week previous, partly because I’d seen him just a year earlier at Hanging Rock, but mainly because I doubted that I could stand for the customary three hours. Even so, I thought this gig was all too brief.

Check out this photo gallery from the gig: Blank Tape – Alana Mazurke

Setlist (*some of these titles were relayed by a third party, so I can’t vouch for the accuracy of all of the songs listed)

This Tornado Loves Me

Hold On Hold On

Encore: Melbourne Heart won the soccer 4-0, but even though his team lost, Declan was happy with his decision to go to the soccer.

Dick Diver’s 2015 album, Melbourne, Florida is excellent – the vocals are still not the selling point, but it is a good album nonetheless.