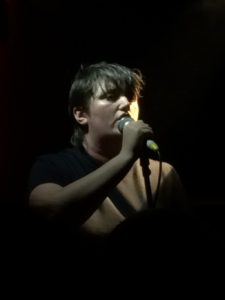 Cash Savage is an imposing figure on stage. She works the room simply by being in it. Her chief weapon is a dynamic stage presence; no costumes, unless you count black t-shirt and jeans, and no props, unless you count a defiant stare, big voice and rock attitude.

Her voice has been compared to Jeffrey Lee Pierce of The Gun Club and indeed, the two singers do share a similar tonality. The fact that they are different genders (unless there is something I don’t know about them) gives you a sense of the power in Cash Savage’s voice. Either way, it’s a very welcome echo of the past that rings through.

The songs are also a considerable part of her armoury; mixing elements of raucous punk with rambunctious country. Veering between peak and trough, they chug along in relentless rhythmic verve, like Port, or sustain their drama with screeching reverb, such as Empty Page. And there’s a directness and sincerity to the lyrics that add conviction to Savage’s performance. My Friend is a ready-made Aussie classic.

Savage’s main weapon in the live context, however, is a ripping band who, even though they contain a fiddle and banjo, generate wild, gusting energy. This is no Pogues-like Irish jig, more a Died Pretty-esque bombast.

My friend John and I were upstairs in the Curtin band room for Cash Savage and her band’s final performance before they head overseas, their last drink if you will. The Curtin band room is a cramped space accessible via one narrow staircase. It acted as a counterpoint to the hangar like vibe at Margaret Court Arena for Ryan Adams the previous night. Nor were there any of the security measures that delayed people getting into Margaret Court Arena. This would be a good thing, except that this is the sort of venue where you actually want them. Given the lack of entry and exit points at the Curtin, the lack of security has the potential to make you feel a little vulnerable. 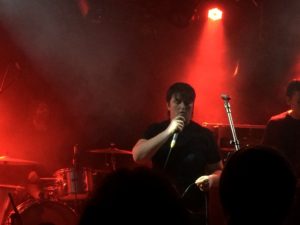 The band opened with the foreboding Falling, Landing and the psychobilly stomp of Let Go. While the focus is very much on Savage, the live show is a collective effort. The five mic stands strung across the front of the stage are testament to the group dynamic and they come into their own for the call and response of Rat-a-Tat-Tat with the band bellowing out the call and Savage responding solo. Even with the numbers stacked against her, Savage’s voice easily wins out.

Sharing the front of the stage with Savage are Joe White on guitar, Chris Lichti on bass, Kat Mear on violin and Brett Marshall on guitar and banjo, although he could easily pass as leather man from the Village People. With Rene Mancuso on drums, it’s as squashed on stage as it is in the mosh pit. 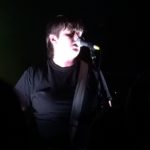 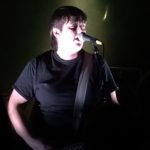 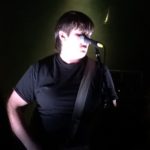 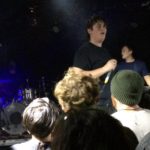 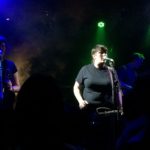 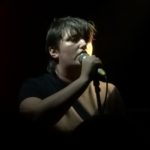 I’ve read somewhere or been told, or possibly just made up, that Cash is a relative of Bad Seed, Conway Savage: daughter, niece, stepsister. I don’t know, but somewhere along the line she has picked up a similar sense of stage mastery as the Bad Seeds. Savage stalks the front of the stage, stands on the fold back speakers and leers into the audience as she belts out her songs. Like the Bad Seeds, the band use bristling restraint as a signifier of the power they can unleash so that when they do explode, they do so with maximum impact, such as in Do You Feel Loved.

They closed the set with the demented blues of The Hypnotizer and Run With the Dogs, which more than most does actually sound like The Gun Club. 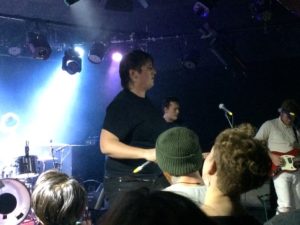 It’s an impressive and intense performance with no artifice but plenty of art. They played most of the tracks from One of Us and a few I don’t recognise from other albums. Compared to some of the diehards in the audience, I’m a relative latecomer to the Cash Savage, but I’m glad I got to see her before last drinks were called. 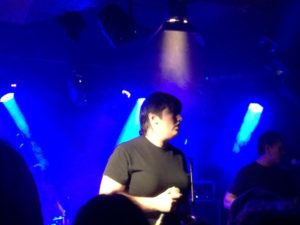 Falling, Landing
Let Go
Rat-a-Tat-Tat
My Friend
One of Us
Port
Do You Feel Loved
I’m in Love
Empty Page
Sunday Morning
Hypnotiser
Run With the Dogs