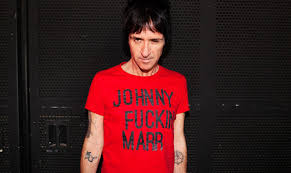 The New Year always brings a plethora of international acts to Melbourne, courtesy of the burgeoning festival circuit that travels the country every summer. There’s Falls, Big Day Out, Laneway, MOFO, Future and several others that pop up for a year or two before the organisers fall out with each other or the festival runs into financial difficulty.

I’m not generally a festival goer; the last couple I attended both fell on 40+ degree days: Laneway to See Echo & the Bunnymen who didn’t turn up anyway, and the first Harvest where the music was good (The National, Portishead, Bright Eyes, Flaming Lips), but the organisation was abysmal and obtaining a drink took the better part of an hour.

Happily most of the acts that tour the festival circuit play a sideshow in Melbourne, so it’s just a matter of picking and choosing. When former Smith Johnny Marr, here to play the New Year’s Falls Festival at Lorne, announced a couple of shows at Melbourne pubs, my friend John and I felt we should go along.

He was playing the Northcote Social Club – a small room that only holds a couple of hundred people. It’s an intimate space and you’re closer to the action than you’d ever get at a festival.

The bloke standing next to me was adorned in Smiths badges and was busy engaging everyone around him in conversation about his many Johnny Marr moments – he’d seen him play the previous night at The Corner – and the relative merits of the latest solo project to previous ones – I wasn’t aware there’d been any. I professed my ignorance of Mr Marr’s solo output and that I’d only ever seen him play with The The at Festival Hall on the Mind Bomb tour back in the late 80s, a confession that accorded me hero status in this man’s estimation, with the Matt Johnson/Johnny Marr combo resonating with nearly as much magic as the Morrissey/Marr partnership. I dared not tell him about the time I saw Robert Smith play with Siouxsie & The Banshees at the Astor Theatre for fear he’d start a cult in my name.

As the lights dimmed and the performance seemed imminent, he warned me not to talk to him during the show as he was secretly recording it. Firstly I didn’t realise people still did that (I have my own collection of poorly recorded live cassettes with my chatter interspersed with the music in a box somewhere at home), but also, the person most likely to blab throughout the gig was him.
At this point the band filed on stage with Johnny bounding in behind them. You could tell he was the main man because while the band all wore sleek black, Johnny had on a royal blue velvet suit coat that designated him as the star, even if the familiar McCartney mop top didn’t already make it obvious. They then kicked in with the bouncy riff of The Right Thing Right, the opening track from his most recent album, The Messenger, and the gig was away.

I hadn’t heard the new album but it didn’t affect my involvement in the show. When the room is small and the band has a big sound, familiarity with the songs is less essential than the power and energy with which they are delivered, and this band demonstrated right from the start that they had plenty of both. Besides, I knew there would be a liberal sprinkling of Smiths songs throughout, and in fact, the very next song was an energetic reading of Stop Me if You Think You’ve Heard This One Before. Needless to say, no one stopped him.

In addition to the hair cut, Marr has an element of Paul McCartney showmanship that verges on vaudeville at moments, particularly when playing a well-known riff, such as the bridge of “Stop me…” where he comes to the front of the stage and holds his guitar with the neck jutting out over the heads of those at the front and dashes off the familiar riff with his eyes wide open and his mouth forming an ‘O’ in a sort of, ‘can you believe how easy I make this look’ expression.

He followed Stop Me… with Upstarts and Sun and Moon from his solo album; both high energy, power pop numbers that lost nothing by following in the wake of a Smiths classic.

The band were tight and well-rehearsed, but just as importantly, looked suitably hip, and showed no less enthusiasm when working through the new material than when interpreting one of the well-known Smiths songs.

Interestingly perhaps, the Smiths songs Marr played were largely the same as those that Morrissey played when he performed at Festival hall a year or so earlier. Panic which Marr played half way through his set was about the only one that the Moz didn’t play. While Morrissey is unquestionably a bigger drawcard than Marr, there’s nothing quite like hearing The Smiths riffs played by the man who wrote them. The audience, largely balding men of my generation, were lapping it up.

The Smiths songs obviously received the most enthusiastic reception, but this was understandable given that band never toured Australia. I’ve now seen three of the four Smiths, but not together – Morrissey on solo tour, Marr on this night and with The The, and Mike Joyce drumming with the Buzzcocks on one of their reunion tours. If Andy Rourke tours here with someone else, I’ll be able to say I saw The Smiths.

Marr took advantage of the excitement generated by Panic to slip in a few of the slower, melodic numbers from his album. But all the new songs were going down well, and those who knew them, such as the fella next to me, were bopping away, singing along and calling out, notwithstanding his secret recording.

Generate! Generate! has a firm steady tempo and a strident chanting refrain that is easy to shout along with, and Marr kept the momentum charging by following it with Bigmouth Strikes Again. Word Starts Attack and the punchy I Want the Heartbeat led into the brooding anthem of How Soon Is Now? which brought the set to its end.

If that was a fitting denouement to the main set, then the first encore song, Please Please Please Let Me Get What I Want provided a stirring return and a good sing-a-long moment for the crowd. Good as it was, however, it didn’t reach the emotive crescendo of the version Morrissey performed at Festival Hall with 10.000 people singing along, but it still packed a punch.

He could have ended it there, but kept it going with a foot stomping I Fought The Law followed by the Getting Away With It, a hit from his days with Bernard Sumner and Electronic, before ending with the evergreen, There Is a Light That Never Goes Out which he dedicated to Rowland S Howard and The Triffids. Good to see that Johnny knew where he was and was acknowledgingl some of his great Australian contemporaries.

It was a strong gig and while I relished having Smiths songs evenly spaced out in the set list, the new material was strong enough that I queued to buy the CD at the merchandise desk on my way out. The hottest item there, a red t-shirt with “JOHNNY FUCKIN MARR” emblazoned in large black script had sold out quickly, and while it remains one of the better tour t-shirts I’ve seen, I was struggling to think of an occasion, other than a Johnny Fuckin Marr gig, where I might actually wear it. Besides music is always be the best take-away from a gig.

Set list
The Right Thing Right
Stop Me If You Think You’ve Heard This One Before
Upstarts
Sun And Moon
The Crack Up
Panic
New Town Velocity
The Messenger
Lockdown
Say Demesne
Generate! Generate!
Bigmouth Strikes Again
Word Starts Attack
I Want the Heartbeat
How Soon Is Now?
– – – – – – – – – –
Please, Please, Please Let Me Get What I Want
The Hop
I Fought the Law
Getting Away with It
There Is a Light That Never Goes Out