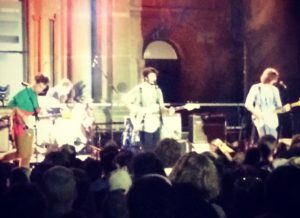 Punk rock and its gentler spawn, post-punk, emerged almost simultaneously in New York, London and Australia in the late 1970s. Exponents of these musical genres came from a generation of young people who felt politically disenfranchised and disempowered – plus they didn’t much care for the prog-rock pomposity of Yes or the east coast blandness of Toto, but that’s another story.

It’s perhaps no surprise then that bands like Parquet Courts are gaining traction during a similar period of political disillusionment, and at a time when nice guys like Coldplay and Adele rule the radio waves. The difference this time is that those people most disillusioned with the so-called political elite have made their influence felt at the ballot box, first with the Brexit vote in the UK, then the re-emergence in Australia of ultra-conservative right wing parties, okay, maverick nut-jobs, and culminating in November 2016 with the election of Donald Trump in the US. These events, partly facilitated by fake news, internet trolls and hackers have ushered in what has become known as the ‘post truth’ world.  And in a post truth world, perhaps only a renewed burst of post punk is the antidote. Or can at least make it bearable.

Of course, this narrative is just a convenient construct. Parquet Courts have been operating since 2010 – sometime before the current political upheavel – and are just the latest in a long line of energetic, thrashy noise merchants, or ‘disruptors’ as they now say in trendy circles. More accurately Parquet Courts are the newest poster kids for what rock and roll has always done best, and that is provide an artistic outlet for brash, unkempt looking, non-conformist young men, and increasingly young women, with attitude and guitars. 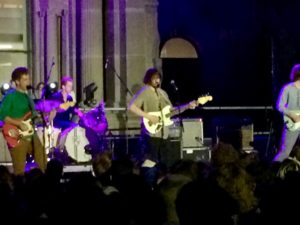 In the tradition of their American antecedents, bands like Talking Heads, Television, Sonic Youth, Nirvana, Sleater-Kinney and others, few if any of their lyrics are overtly political. Parquet Courts instead write music that is abstract and abstruse – whatever meaning it contains is as much personal as it is political. Most importantly, they bash out killer riffs at rapid fire pace.

I first heard Parquet Courts on the David Letterman show. I’m not sure if it is acknowledged much in the industry, but the Letterman show, and to some extent the new Colbert show, have always championed exciting and innovative new bands and artists. As someone who doesn’t much listen to radio, I’ve heard a number of great bands for the first time on Letterman, not necessarily at the very beginning of their careers, but in most cases, long before they’ve broken through to more widespread fame. That night they played Bodies Made Of and I was so impressed I bought the Sunbathing Animal album as soon as I found it.

Parquet Courts play songs that are short, sharp and abrasive, propelled by scratchy, discordant guitars and vocals that alternate between the shouty and the laconic. And if I may break one of my personal dictums, and describe a band’s sound by comparing them to other artists, I’d call Parquet Courts a cross between The Strokes, Sonic Youth and early Fall. To some people such a triumvirate might simply signal that they are overrated, pretentious and rudimentary, but even then, I’m not entirely sure that’s all bad. 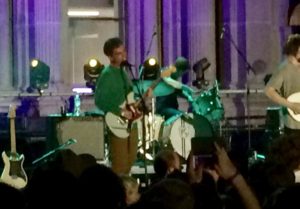 The show was put on by the Shadow Electric team who have moved operations to Melbourne University this summer while their Abbotsford Convent base is being renovated. The season of outdoor music and cinema is called Shimmerlands and is set up in a picturesque forecourt bordered by trees, gardens and impressive sandstone buildings.

Really, what better way to usher in a new year of music than by seeing uber cool indie stars Parquet Courts at our local seat of learning – Melbourne University. This was the band’s only Melbourne sideshow to coincide with their Falls Festival appearances.

Parquet Courts curated the event; ‘curated’ being a fancy word for asking some of their favourite local bands to perform with them on the night. In this case it meant Terry, Ausmuteants and Tyrannemen.

It was a balmy night in Melbourne so the light mist of water spraying from the perimeter of the bar area offered a welcome, if momentary reprieve from the oppressive heat. There was no reprieve, however, from the throng surrounding the bar. It was four or five people deep around each of the four serving sides, representing a constant, if disorganised and increasingly impatient queue of approximately 200 people. There were about eight serving staff, which probably seemed sufficient in the planning stages, but was hopelessly inadequate given the equatorial heat and the crowd’s collective thirst. The girl who eventually served me was so delightfully vague and slow that it was hard to remain annoyed. Even so, I ordered two beers while I was there so that I didn’t have to queue again.

I had missed the first two acts but Tyrannemen had started by the time I sat down with my bar haul. They played loud and fast rock of the Radio Birdman variety; their songs punctuated by a short, shouted chorus and a punchy guitar break. The lead singer, with a hairline that was retreating rather than just receding, resembled Riff Raff from the Rocky Horror Show. 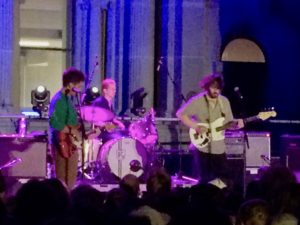 A pre-recorded band introduction explained the correct pronunciation of the band’s name (Par-kay) as well as the origin of the name (an old fashioned basketball court surface), and the various band members, including their places of birth and their current relationship status. The rules of the show were also outlined – no moshing etc, with men being quite fairly singled out as the main culprits. The announcement also referred to the band’s carefully curated setlist and highlighted that any requests for particular songs would only result in the requested song not being played. Just in case it was on the setlist, I took the opportunity to yell for Frog Pond Plop, not that it is necessarily the worst example of dissonant fuzz on the Monastic Living EP, but it is the best title to shout out in public.

There’s an old saying in rock that you’re not hearing unless your ears are bleeding. Parquet Courts put this notion to the test with a blistering sonic barrage that rendered me as good as deaf for much of the following day.

During Captive of the Sun one of the speakers emitted a loud and distorted crackling that made me think it was about to blow. I wasn’t sure whether to put this down to a faulty PA or Andrew Savage wringing excessive dissonance from his guitar. Like all good sportsman, however, they just played through the pain. Admittedly the pain was mine, but at least the problem seemed to right itself. Either that or the sensitivity in my hearing had disappeared to the point that I could no longer distinguish between sounds.

Parquet Courts aren’t the loudest band I’ve heard. That honour goes to Einsturzende Neubauten who played one night in the 1980s at the Old Greek Theatre in Richmond, and were so loud that most of the audience retreated to Bridge Road to listen. Likewise Fuck Buttons, who played at the Palais Theatre as part of All Tomorrow’s Parties one year and drove most of the audience out onto The Esplanade. Parquet Courts, by contrast, just delivered a sort of aural cleansing rather than outright sonic assault and battery.

They opened with a series of songs from new album Human Performance: beginning with Dust and the album’s title track, after which a sonic squall of feedback morphed into Outside. The two vocalists Andrew Savage and Austin Brown stood on either side of the stage while bassist Sean Yeaton took centre stage with drummer Max Savage up the back. In a nod to rock tradition, Brown was wearing his sunglasses, despite the fact that night had fallen. 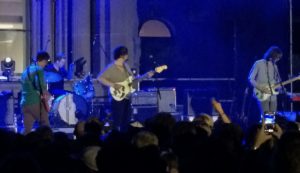 The band was playing everything at a faster tempo than on record, as if they had the word ‘prestissimo’ scrawled across the top of their setlists. They even rushed their breaks, barely pausing between the end of one song and the beginning of the next. If nothing else, the hell for leather tempo encouraged general dancing, particularly from the girl next to me who seemed to need a lot of room for her gyrations. I didn’t mind so much except that I was standing on the edge of a bluestone fence to get a good view and her jutting elbows threatened to knock me into the general mosh area.

The audience’s jumping and arm pumping became more pronounced and less controlled when the band started to belt out older tracks like Sunbathing Animal, Master of My Craft and Yr No Stoner at breakneck speed. The pace was unfailingly urgent and the sound primal and impertinent. 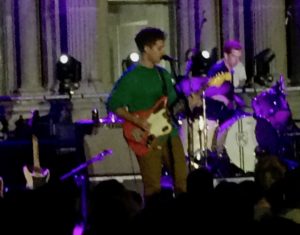 The only respite from the sonic barrage came with the slower, more sedate, Steady on My Mind. Any break in the maelstrom was fleeting, however, for they picked up the pace again with a ragged rendition of Berlin Got Blurry, and the near funky One Man No City, and kept the exhilaration going by finishing with Ducking and Dodging and Light Up Gold II.

There was no encore, as seems to be the way with younger musicians these days. Is this encore divide a sign that young performers are too cool and authentic for the ridiculous charade of the encore, or that older musicians are so desperate for validation and acclimation that you can’t get them off the stage?

To be honest I think I’m with the kids on this one, not because I think encores are necessarily ridiculous, but because I’m always happy to wind things up a little earlier. So I didn’t mind on this occasion. I’d enjoyed a fun-filled hour of discordant, spiky post punk mayhem, and even if my hearing was gone for good, at least the final sounds I heard had me dancing. 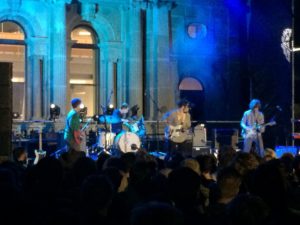 Outside
Paraphrased
Captive of the Sun
Sunbathing Animal
What Colour is Blood?
Master of My Craft
Borrowed Time
Yr No Stoner
Bodies Made of
Steady on My Mind
Berlin Got Blurry
One Man No City
Ducking and Dodging
Light Up Gold II