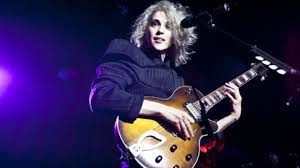 According to Catholic protocol, the prerequisite for becoming a saint is to have performed two posthumous miracles. Annie Clark, aka St. Vincent, is still very much alive, but on Saturday night at a small bar in Brunswick she delivered a performance so dynamic and mesmerising that many in the audience viewed it, if not as a miracle, then certainly as something close to a religious experience.

If she didn’t already have the honorific ‘saint’ as part of her name, the vast bulk of the audience would have petitioned The Vatican to waive the petty bureaucratic requirement that saints be deceased and demand her immediate canonisation.

St. Vincent was in Australia for the Vivid LIVE Festival in Sydney, a light and sound spectacular that features a series of concerts at the Sydney Opera House. The Pixies were the headline act for Vivid LIVE playing exclusively in Sydney, but the other acts were all playing shows in Melbourne as part of their visit. So instead of seeing St. Vincent in a vast auditorium, we had the good fortune of seeing her in the back room of a pub in Brunswick.

This was the third of a three night residency. I hadn’t been to Howler before, but I was reliably informed by someone far younger and groovier than me that it was the latest ‘it’ venue. The queue of people waiting to get in – just to the pub that is, not even the show – attested to this.

Brandishing our tickets, my friend John and I were waved through the queue and into the first bar and dining area. The din was incredible and it was just the sound of people talking loudly as they imbibed. This led through to another large, but slightly less loud space, then through to a club at the back where St. Vincent would be playing. It was a medium sized space that probably held around

300-400 people.  There were a few booths at the back but a nice large stage and reasonably funky décor.

A quiet bar to the side of the stage gave patrons a view of the performer and piped the sound in through normal bar speakers, allowing people to socialise while still hearing the band. It was from here we took in support act D.D. Dumbo. He performed solo, commencing each song by setting up a loop on a drum or guitar, and then adding layers progressively as he went, creating an intricate and intimate sound. You know, like Ed Sheeran, but without the tatts or the 10 million fans. He was pretty good actually – I bought his EP on iTunes when I got home. He was also quite handsome, and as a one-man band who can multi-task, he would be quite handy to have around the house.

The audience filtered in throughout his set and it was noticeable that people were making a sartorial effort for St. Vincent. Boys wearing lipstick and smart jackets, girls with new hair-do’s wearing their very tightest gear. In one such group sitting near us the gent, probably aged in his early to mid 20s was busy expounding authoritatively to his female companions that REM was essentially an EMO band. In retrospect I wouldn’t say categorically that he was wrong (or that it matters), but it was interesting if only because I don’t think the term EMO existed during their heyday, and certainly not when they started in 1982. Also because the speaker himself wouldn’t have even been alive at the time I bought my first REM album, Fables of the Reconstruction around 1984 or so. Even if he was I doubt that he was attuned to the nuances of alternative music micro genres of that era. I equate EMO with Goth, and REM were certainly not a Goth band, though the black lipstick brigade weren’t beyond dancing to “It’s the end of the world as we know it…and I feel fine” at Thrash and Treasure, a late 80s Goth club in Richmond.

John and I had seen St. Vincent on her previous visit to Melbourne when she performed with David Byrne at Hamer Hall, playing songs from their Love This Giantcollaboration. As long-time Talking Heads and David Byrne fans, we’d gone to the show primarily to see Byrne but came away obsessed by St. Vincent, both her music and her striking stage presence…okay and her beauty; we’re only human. So we were looking forward to see her perform her own show.

By the time the electronic buzzing intro of Rattlesnake pulsed through the speakers to open the show, the crowd had packed out the room and a raucous cheer greeted the newly platinum blond St. Vincent as she glided onto the stage. She was wearing black crop jacket with 80s lapels that she teamed with a short black pleather skirt. We knew immediately that we were in for as much a show as a concert when she posed and bent herself into a series of stylised choreographed movements before launching into the song.

The sound was clear and the mix distinct and the music thumped along. Halfway through this opening track she took her guitar from the roadie and launched into a loud, volcanic solo, her blond curls in stylised head-bang. It was glorious.

The early part of the show was an exhilarating run of tracks taken from her latest, eponymous album: the guitar led funk of Birth in Reverse, Regret and the dynamic marching rhythms of Digital Witness, broken only with the smooth club grooves of Cruel from previous album, Strange Mercy, all up tempo dance tracks that got the audience bopping and moving.

To our left, one trio took to the dancing like Baptists discovering it for the first time. One of the guys jumped up and down pogo style, the woman swung extravagantly from side to side while the third guy hunched in behind them and edged them forward. Clearly they were trying to push their way to the front and it worked, because whoever was standing directly in front and either side of them soon got sick of their deliberately provocative jostling and let them through, if only so they could annoy someone else.

If I wasn’t throwing myself about with the same abandon as others, it was because I was simultaneously following the scores in the final minutes of the Hawthorn v Port Adelaide game that was finishing just as the gig began. Sadly the Hawks lost, an outcome that would normally have me moping about disconsolately, but St. Vincent was so mesmerising I was able to shrug off the loss quickly, or at least postpone until later my devastation.

Laughing with a Mouth of Blood and Year of the Tiger from her second and third albums respectively changed the tempo, but not the intensity, which remained strong and absorbing.

She performed I Prefer Your Love while draped across raised steps at the rear of the stage. Clearly it was too obvious a motif to adopt while performing unreleased song, Pieta, however, she stood atop it to elevate herself for the dirty funk of Every Tear Disappears and the grandiose Cheerleader.

On a few occasions she paused to address the audience. These were practiced monologues of quirky observations about what we share in common. They sounded like they could have been scripted by David Lynch.

The band were tight, not just musically, but performance-wise, with Toko Yasuda on keyboards and guitar joining St. Vincent in her choreographed stage moves, and adding a few of her own. There was very much a performance art element to the show from the two leading ladies, while Matthew Johnson on drums and Daniel Mintseris on keyboards provided solid grounding at the back.

All eyes, however, were on St Vincnet who was utterly transfixing, especially when she executed her tiny Geisha steps and appeared to glide back and forth across the stage, while staring fixedly at the audience.  Like one of those paintings in which the subject seems to follow you around the room, St Vincent’s stare seems to be directed personally at each member of the audience.

Such was her spellbinding allure that the man next to me actually moaned with lust at one stage, and eventually shouted out, “I wish I wasn’t gay!”

I felt his pain, but before you accuse me of being shallow, or just a dirty old man, remember, she started it. St. Vincent’s the one with the predilicition for undressing in songs. Not on stage as such, but lyrically she gets her kit off fairly regularly. In the first song she performed at this gig, Rattlesnake, she takes off her clothes in the second line. In Surgeon she’s ‘dressing undressing for the wall,’ while in Dilletante she asks Elijah ‘what is so pressing that you can’t undress me anyway.’ In Cheerleader meanwhile, she claims that ‘I’ve seen America with no clothes on’ – whether it is herself or America that is without clothes is unclear, but in basic communication theory, the listener has the right to interpet it as they wish and make their own meaning. If the more susceptible audience members weren’t already whipped into a frenzy of desire by such blatant exhibitionism, in Birth in Reverse she reveals that for her, an ordinary day involves taking out the garbage and masturbating. So you can understand people getting excited.

The stylish steady groove of Prince Johnny provided one of the highlights of the set, followed by Marrow that began with a Philip Glass like keyboard motif, but swerved dramatically into dirty funk territory. Huey Newton also took a dramatic turn from a gentle television sci-fi soundtrack to a ferocious and histrionic rock rant, a mood she continued with the strident Bring Me Your Loves with its marching drum tattoo, demented guitars and its fizzing, sparking synths.

St. Vincent returned alone for the encore and performed the slow and tender Strange Mercy solo on guitar, before the band returned for the pounding, discordant repetition of Your Lips Are Red.

I loved it. For me this was easily the best gig of 2014. St. Vincent’s performance was stylized, sensual and cerebral, and the music ranged form torrid to tender. It was immaculate and immersive; one of those shows we’ll be boasting about having seen, and in particular that we saw it in a small intimate space like Howler.

Prior to the show a recorded voice warned us against bearing digital witness, and while I refrained from taking any pics, preferring to bear actual witness, I’m glad others captured images from this startling performance. 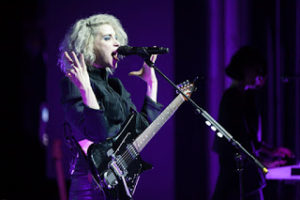 Laughing With a Mouth of Blood

Year of the Tiger

I Prefer Your Love

Bring Me Your Loves

Your Lips Are Red