SONGS IN THE KEY OF DEATH

During the encore, Sufjan Stevens revealed that when he was putting together the setlist for this performance, he’d been listening to Stevie Wonder’s Songs in the Key of Life, marveling at the positive, celebratory nature of the music. He then looked at the setlist he was writing and realised that all of his songs were about death and wondered where he’d gone wrong. In his mind re-titled his show, ‘Songs in the key of death’.

He wrestled with the possible meaning behind his obsession with mortality and rationalised it philosophically, turning it into a positive about celebrating the moment and the music within us. I’m paraphrasing, for this speech, his only non-musical exchange for the night, meandered a tad. But he needn’t have worried on our behalf, because by this stage he’d well and truly won over everyone in the auditorium. 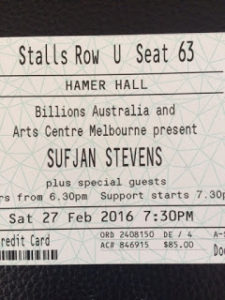 The first part of the show was a truly mesmerizing marriage of musicianship, performance, songcraft and lighting effects.

After opening with the atmospheric instrumental, Redford (for Yia-Yia and Pappou), Sufjan and band moved through eight consecutive songs from his most recent album, Carrie & Lowell, starting with the album’s opening two tracks Death With Dignity and Should Have Known Better.

The album deals with Sufjan’s upbringing and the death of his mother, who suffered from schizophrenia and alcoholism. It is a deeply personal and confessional album full of slow, sparsely accompanied songs of loss and forgiveness, all sung in Steven’s soft falsetto. Just the sort of thing for a Saturday night out then.

I was at the show with Anglea, my band buddy John and his wife Sue. John had secured us good seats in the stalls. Unlike most venues in Melbourne, Hamer Hall is a proper concert hall designed for music. The acoustics are excellent – too good in fact; at times I could hear the people in my row singing along under their breath. It doesn’t work for every gig – rock bands can feel incongruous, something to do with the venue’s formality, soft furnishings and smiling bar staff – but it was the perfect venue for this show. The suite of soft, elegiac songs on Carrie & Lowell capture feelings of sadness and melancholic nostalgia, and Stevens and band played them with an exquisite light touch. With Sufjan front and centre on guitar or seated at a piano, the band kept to the sidelines, shadowy figures moving from instrument to instrument in the background, while dazzling lighting effects alternated with projections of old family footage on a series of screens behind the stage. The screens were arrayed like lancet windows in a church – nine tall, thin screens with an arch at the top – creating a reverent and evocative atmosphere.

One of the most powerful moments of the show was when they played Fourth of July with Stevens at the piano. It is a heartrending song about his mother on her deathbed that ends with the sobering refrain, “We’re all gonna die” which Stevens repeated over and over, building with intensity each time until it exploded in a cathartic crescendo that, despite the central tenet of its message, was paradoxically life affirming.

Whatever feelings of sadness these songs evoked in the audience, they certainly had an affect on people’s bladders. Such was the procession of people clogging the aisles to get to the toilet between songs that the band could have been forgiven for thinking we were staging a mass walk-out. Of course it is also possible that people were simply overcome and were going to the bathroom to get toweling to dab their tears or to weep in private.

The Owl and the Taneger and a trio of songs from The Age of Adz, interrupted the run of songs from Carrie & Lowell, but they returned to the latter album to play Blue Buckets of Gold. As on the record, this song provided a beautiful and moving finale. In this live rendering, however, its minimalist keyboard motif morphed into an extended ambient lamentation with white strobe lights flashing through two of the screens, drenching the entire concert hall in celestial lights, like a meteor shower. As the sound swelled, so too did the light show, adding purples and reds in a frenzy of effects and flashing colour, concluding with a manic strobe display like a time lapse of a lightning storm. It was a startling climax and triggered an immediate standing ovation as the band took their leave.

After the intensity of the first part of the show, the band set up a lighter mood for the encore. The lights were up meaning we could actually see the five musicians. They all gathered at the front of the stage and arranged themselves around one central microphone with acoustic instruments. Sufjan had the banjo and he picked out For the Widows in Paradise, for the Fatherless in Ypsilanti from the Illonois album.

The group ran through a series of crowd favourites including All the Trees of the Field Will Clap Their Hands, The Dress Looks Nice on You, All of Me Wants All of You and To be Alone With You. The acoustic arrangements were augmented by beautiful four-part harmonies that were reminiscent of Simon and Garfunkel or even The Seekers.

I missed the names of the band members when Stevens introduced them (was there a Casey and James, and was the bearded chap introduced as Zorka the Explorer?), but they were all accomplished multi-instrumentalists. Dawn Landes, whose name I did catch, was a stand out; her harmonies in particular lifted songs to another plane.

The show concluded with an acoustic version of Chicago that had the half the auditorium, if not quite harmonising, at least singing along.

When we left there was a man on St Kilda Road charging $2 to look at Jupiter and its four moons through a powerful telescope. Angela and Sue had a look, but I felt that I’d already had my mind-blowing celestial experience for the evening. What could Jupiter offer that Sufjan hadn’t already provided? 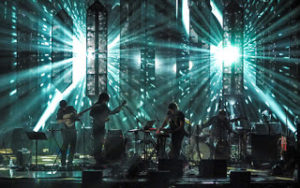 This photo was taken by Justine Schaible and was published in The Huffington Post on 8 June 2015.
It shows Sufjan Stevens and band performing Blue Bucket of Gold in Los Angeles on 3 June 2015.

Redford (for Yia-Yia and Pappou)
Death With Dignity
Should Have Known Better
Eugene
Drawn to the Blood
The Only Thing
Fourth of July
No Shade in the Shadow of the Cross
Carrie and Lowell
The Owl and the Tanager
Vesuvius
I Want to be Well
Futile Devices
Blue Bucket of Gold
———–
For the Widows in Paradise, for the Fatherless in Ypsilanti
All the trees of the field will clap their hands
The Dress Looks Nice on You
All of Me Wants All of You
To be Alone With You
Chicago

Encore: In case it wasn’t already obvious, I’m the sort of music tragic who makes lists, mental ones at least. Sufjan Stevens’ Carrie & Lowell topped my best album list for 2015, beating out Father John Misty’s I Love You, Honeybear, Courtney Barnett’s Sometimes I Sit and Think and Sometimes I Just Sit, Low’s Ones and Sixes, Jason Isbell’s Something More than Free, Robert Forster’s Songs To Play and Tame Impalas’ Currents. All of these artists played in Melbourne in the past nine months, or are set to in the next month.