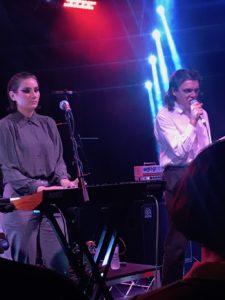 Melbourne’s latest ‘it’ band U-Bahn were playing a farewell gig at the Northcote Social Club before heading off on a European tour. I was there with the usual suspects – John, Fiona, Ralph and Greg – to catch them before they took off. A ticket price of less than $15 seemed like good value, notwithstanding the fact that I’d been to gigs on the two previous nights and was a tad tired. But that’s the price you pay if you want to give the appearance of being up with the latest and down with the kids. However, U-Bahn’s self-titled debut album is excellent and as evidence of just how hip they are, you can only get it by mail order from Europe.

Someone of my vintage seeing U-Bahn for the first time could be forgiven for thinking they’d been sucked back into 1983. The lead singer is on synth and wears a serious expression and a white shirt buttoned to the top. All the band members wear eye make-up, except the guitarist who sports a bud of bright red lipstick, and the bassist rocks a gold lame shirt. As Greg said, they could have walked straight off the set of Countdown.

But even aside from the ‘look’ there’s the sound. As their name suggests, there is a Euro aesthetic at work, but there are also some obvious American and English 80s antecedents like Devo, The Cars, Wall of Voodoo, or even the overt synth stylings of Roxy Music, Ultravox and a whole raft of bands that dominated the early 80s soundwaves – A Flock of Seagulls, Gary Numan et al.  None of which is a bad thing, and in the predominantly younger crowd, our gang of 50-somethings were probably among just a few who remembered all this from the first time around. The band’s secret was safe with us.

Perhaps of equal significance, this combination of sound and vision denotes a band that is very aware of the importance of having an identifiable aesthetic and of putting on a show. 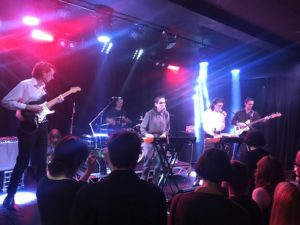 And it was a good show. The band were pretty tight and while the songs were performed with seriousness and intensity, they weren’t overly earnest. There were gags, a bit of banter with the audience, and new member, sax player Stella, spent the bulk of the gig seated on the drum rise communicating in mime with her friends in the front rows. Plus, one of their mums was working the merch stand.

Bassist Myles Cody took on the duties of thanking the audience for our applause, but had to edge carefully around an obstacle course of synths and wires to use singer and synth player Lachlan Kemmy’s mic. “One day I’ll get my own mic” he quipped. Of course another option might be for one of the people with mics to do the ‘thank yous’ – just an idea. Zoe Monk, also on synth, remained utterly expressionless throughout, possibly because she was concentrating, but I like to think she is trying to cultivate a deadpan persona. The only time she broke into something like a smirk was when she orchestrated the little ascending rise of percussive keyboard notes on Goodbye Placenta. 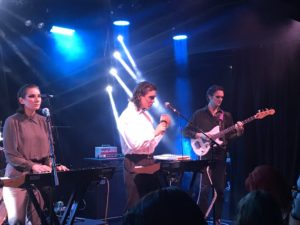 I also enjoyed watching guitarist Leland Buckle, who reminded me a bit of Thurston Moore, though this might just have been his tall lanky build rather than his playing style.  I’m not sure if Moore ever took to wearing lipstick on stage, but something tells me he wouldn’t be entirely averse to it. But Buckle exuded an air of casual nonchalance as he added some sharp guitar licks to the soundscape.

I recognised most of the songs from the few listens I’ve given the album. My copy is still on its way from Germany, so I’m not sufficiently au fait with the titles to have taken down a setlist, but songs like Right Swipe, Beta Boyz and Scantly Clad all had a fuller sound live than on the recording. 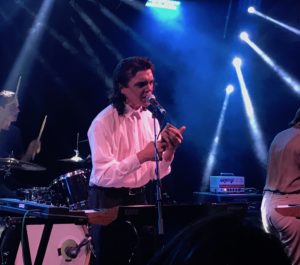 All of which bodes well for the European tour on which they are embarking. I can’t wait for their triumphant return. 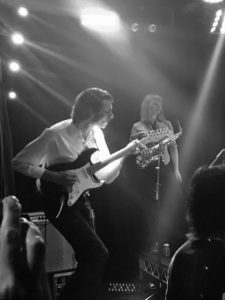 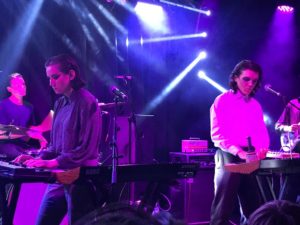