DROWNING IN THE SOUND 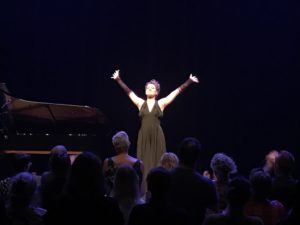 Normally people are disappointed when a show doesn’t live up to its billing, but in the case of a four-hour show, the audience was grateful that notwithstanding the title, we were given a 20 minute intermission half way thorough the show.

Full disclosure: I’m a member of Amanda Palmer’s Patreon. This means that every time Amanda produces a ‘thing’ I pay her $3. It usually works out to about $9 a month at most. In return for my monetary pledge, I’m inundated with demos, downloads, videos and long screeds of information about almost every aspect of her life. Amanda works very hard to keep her patrons informed of her activities, to the point that she could be accused of oversharing. I read most of her missives, but don’t necessarily watch all of the videos, listen to the podcasts, or read all the interviews, but I do listen to all the music.

Sure, there are probably more worthwhile causes I could support, but I like the idea of backing an artist to create whatever she wants. And in the spirit of full disclosure, Amanda Palmer also fits my youthful, okay, lifelong, predilection for goth chicks who don’t necessarily shave their body hair and who have a propensity to pose nude.

I followed the recording of her latest album, There Will be No Intermission from demo stage through to receiving in the mail the special Patreon midnight blue vinyl edition with signed nude portrait (see, I told you). My name is listed in the credits of the accompanying art book and I have tracked the tour for 12 months as it has wended its way around the world, including waking up at five in the morning Melbourne time to watch a livestream of one of her recent London shows.

As a result, I felt very connected to the whole endeavour by the time the show came to Melbourne, so much so that my wife half-suspected I was having an affair with Amanda Palmer. As it happened, my wife was away at the time of the gig, so I invited my friend Fiona who I thought might respond well to the type of show Palmer was putting on.

I say this because it was not a normal rock show. It’s as much confessional as concert in which Palmer mixes stories and songs that are both personal and political, taking in themes like death, abortion and miscarriage. So not everyone’s idea of a good night out perhaps, and at four hours long, it is indeed a night out. But for all that parts of the show are harrowing, other parts are hilarious, and even in plumbing the depths of despair, she can be both playful and profound.

But first there’s merch. I arrived early and found Amanda in the foyer signing posters for sale to raise funds for Firesticks as part of the bushfire appeal. I picked up a patreon badge, a poster and a tour tee-shirt, grabbed a beer and waited for Fiona. 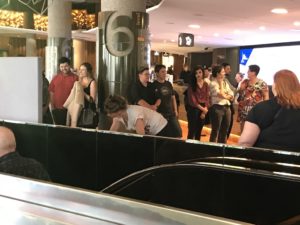 Amanda appeared on stage, acknowledged the audience sat down at the piano and played a version of My Favourite Things with re-worked verses referencing just some of the many issues Australia has faced during the ongoing bushfire crisis. It’s a song laced with irony that she had written as part of a tribute to the sound of music.

She played Runs in the Family at the piano and Bigger on the Inside on the ukulele, the songs emerging from threads of narrative she was weaving about her life and her fraught relationship with men, music, motherhood and more. Forty-five minutes in and we’d heard only three songs, but it was all utterly compelling.

As the narrative unfolded, she played old songs, Oasis, new songs, Machete and a cover of Part of that World from The Little Mermaid, which may seem an odd choice, but made sense in the context of the show. A Mother’s Confession, a long song about parental guilt in all its guises led into intermission, with the sing-along chorus, “at least the baby didn’t die” and Palmer urging us on. “Sing like it’s your baby not dying,” she exhorted. Perhaps counter-intuitively, it was an upbeat ending to the first half. 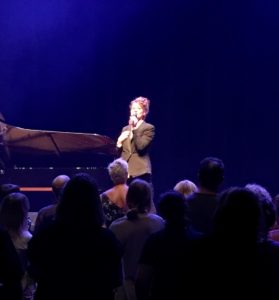 We all needed a drink after that, but it was telling that the queue for the toilets was longer than the queue for the bar. That’s what you get with an audience in the 35-55 age bracket. I can’t necessarily say the same for the men, but Fiona wanted me to know about the pleasant organic odour of the women’s toilets at interval, as if this reflected well on Amanda Palmer’s fans, and therefore by association, me.

Back for the second half, Palmer opened with crowd favourite Coin Operated Boy before picking up the narrative that by this stage had grown quite dark. But as she had commented earlier in the show when relaying a story about being accused of making light of abortion, ‘it is literally the role of the artist is to go into the dark and make light.’ 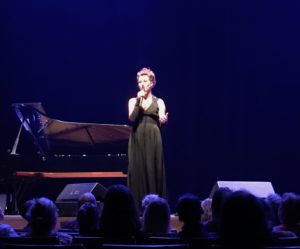 The stories were raw and honest, and the confessional nature of the show, she revealed, was inspired by seeing Hannah Gadsby’s Nanette, Nick Cave returning to the stage after the death of his son and watching Springsteen on Broadway.

And the songs that followed in the second half, Drowning in the Sound and Voicemail for Jill packed the requisite emotional punches. She departed from the script to play the as yet untitled song she had composed after two days of listening to confessions from people at the Mona Foma festival in Launceston. It was another 10 minute epic that took in stories of betrayal, the massacre of Australia’s first peoples and much else besides.

We stayed off script for a cover of Beds Are Burning that was filmed and recorded for a proposed bushfire fundraiser. Audience members and crew joined her on stage holding large bedsheets with the lyrics to the chorus so that we could join in on mass. I’m not sure we’ll make the final cut, but if nothing else, the process lightened up proceedings, as did her final song. Let it Go, from Frozen which picked up on one of the tropes of the narrative that she had been spinning and served as a welcome release from the raw emotion of the evening.

We’d been going four hours by this stage, but it hadn’t seemed that long. I’d already given over to the idea of getting a taxi home so I didn’t mind when she returned for an encore and played The Ride – it was the perfect ending for such an emotional rollercoaster of a show (pun intended). It had been one hell of a ride, but also a sort of communion. And as the song says, ‘isn’t it nice when we all can cry at the same time.” Lucky I had also bought the AFP monogrammed handkerchiefs at the merch stand.

It was getting onto midnight by the time she took her final bow, but I hung around for the patron group photo and Amanda emerged 10 minutes after the show to chat to the fans and get in a group hug – that’s me in the hat looking awkward. 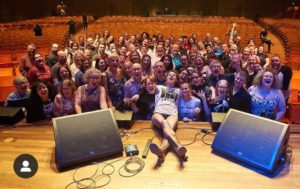 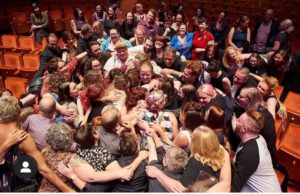 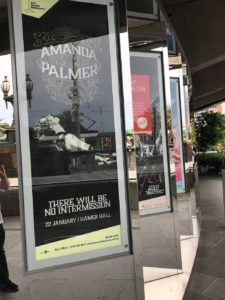 Bigger on the Inside
Runs in the Family
Oasis
Part of Your World
Machete
A Mother’s Confession
——–
Coin Operated Boy
Drowning in the Sound
Suck it Up, Buttercup
Beds are Burning
Voicemail for Jill
Let it Go
——-
The Ride

Photos of the Hamer Hall show below by Nicola Bernadi taken from Amanda Palmer’s Instagram feed. 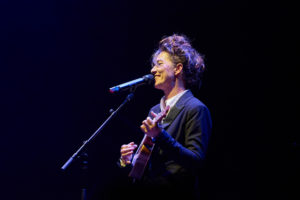 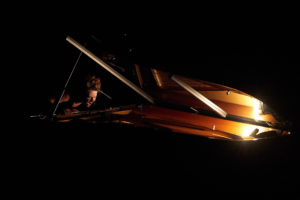 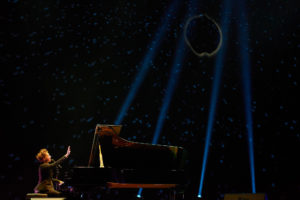 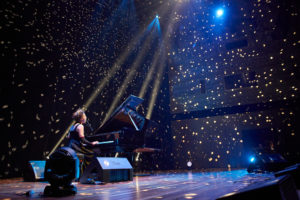 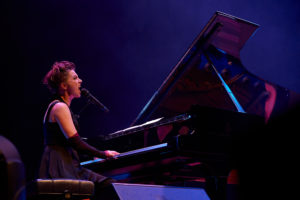 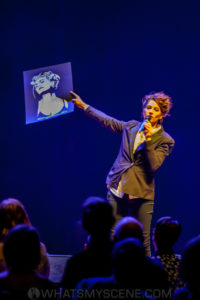 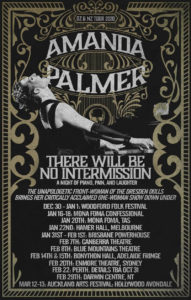