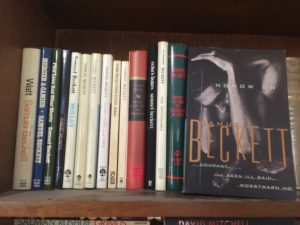 “I can’t go on, I’ll go on,” says Samuel Beckett’s anonymous hero at the conclusion of ‘The Unnamable’, the final novel of his 1950s trilogy. It may be a statement of courageous intent, optimism or a lament, but thirty years later, by the end of ‘Worstward Ho’, another unnamed narrator can find ‘nohow on’.

Written in English; it is a short work, though not by Beckett’s abbreviated standards. For all its brevity – approximately 4,000 words, there is still plenty to savour, even if the action is slight.

‘Worstward’ sounds a pessimistic direction, but the pun on the title of Charles Kingsley’s Victorian novel ‘Westward Ho!’ lends it a degree of humour. The best way to reach the destination is settled at the outset, ‘Ever tried. Ever failed. No matter. Try again. Fail again. Fail better.’

The beginning is tentative, with the narrator conjuring a body and a place ‘where none’. Doubts about how to proceed are reflected in a hesitant prose that stops and starts. ‘First the body. No. First the place. No. First both. Now either. Now the other.’

There are very few actual sentences. Most of the narrative is made up of short fragments. This makes it as difficult for the reader to continue as it seemingly is for the teller.

The body is that of an old man – the place, a dim void. The man is joined by a young boy and ‘Hand in hand with equal plod they go’, yet don’t seem to get anywhere. An old woman, kneeling, also appears, but her relationship to the man and boy is left open to speculation.

This indecision gives the reader a sense of being inside the writer’s mind, witnessing first hand the story’s creation and helping to navigate the journey worstward. The result is a text that can read like a series of stage directions, perhaps not surprising for a dramatist.

It is a difficult book to read and follow, not least because the narrator is in constant self dispute over every detail. Somehow reading it aloud adds clarity and helps highlight the many puns and homophones. It also reveals a resemblance to the work of Dr. Seuss. Try reading ‘Thenceless there. Thitherless there. Thenceless thitherless there’ and not think of the good Doctor’s tongue twisters.

In his autobiography ‘Experience’, British author Martin Amis makes fun of Beckett’s prose. ‘Nor it the nothing never is. Neither nowhere the nothing is not. Non-nothing the never.’ He could be quoting from Worstward Ho.

While amusing, Amis simply highlights how easy it is to mock such a singular voice. What he overlooks is that the repetition adds layers of meaning and indeed, humour. It is a singular voice, but one that never stops questioning its own validity until there is ‘nohow on.’

Beckett’s style may not be easy or in fashion, but his pared back language and disjointed syntax describe the difficulties of communicating and make me wonder how he might respond to newer abbreviated forms such as texting. A narrator who can’t decide what characters to include and exclude might also enjoy the concept of readers voting them in or out, in the way of contemporary television.

Worstward Ho will make more sense if you’ve read its precursors. Even then you might struggle, but when you think you can’t go on, go on. It’s worth it.

Previous post
The Hallelujah Chorus: the story of one song’s journey into popular culture.
Next post
High on Hawthorn: The Road to the 2013 Premiership