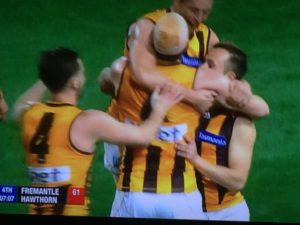 There comes a time in life when big decisions have to be made; when you have to make the right decision at the right time. I’m therefore pleased to report that when those moments occurred in Saturday nights’ Preliminary Final between Hawthorn and Fremantle, officialdom stepped in to make the correct calls at the crucial time.

First there was the free kick off the ball against Hayden Ballantyne that turned a Fremantle clearance into a Hawthorn shot on goal. Yes the free kick was there; for all that some people carried on about the softness of the decision, you could see that Ballantyne clearly bowled over Suckling so that he could become free on the wing to receive the kick. He was after an unfair advantage so it was a definite free kick.

Then David Hale was set to shoot for goal from outside 50 metres, when one of the umpires called a 50 metre penalty. Channel 7 never showed the infringement, possibly the cameras didn’t pick it up, or possibly, it was only detectable to the trained eye of an umpire. In any case the resulting goal brought the Hawks equal after Freo’s fast start.

As welcome as these decisions were, there was an even more crucial intervention before the ball was even bounced, when the AFL decreed that Hawthorn could wear their brown and gold stripes in place of the Power Rangers outfit. It is a measure of how hideous our gold and silver lame outfit is that the brown and gold stripes look to be the epitome of timeless style by comparison.

Freo have been fast starters in their victories this season, so wresting control in the first quarter was where we own the match. After Chris Mayne missed a set shot that would have put Freo three goals up, the Hawks kicked the next five for the quarter. This included the two umpire assisted goals, but also set shots to Breust, Schoenmakers – after a glorious pass from Cyril, and a round the body snap from Suckling.

When Breust turned on the boundary line early in the second quarter and got the ball to Liam Shiels who found Schoey with a pin-point pass, the Hawks had opened up a 22 point lead.

From that moment, however, Freo got back into the game and began to dominate general play. But key moments went Hawthorn’s way. Roughhead, wearing a bandage that made his head look like a circumcised penis, slotted a beautiful goal from 50 metres out on the boundary line. A moment later on the half-time siren, Fremantle’s Jonathon Griffin had a set shot from 30 metres out directly in front and as the Freo players began celebrating, the ball veered off dramatically and smacked into the post. The Hawks by 16 points at half-time.

Brownlow medal favourite Nat Fyfe had been hampered by a leg injury early and the signs were not good for him when even Ben McEvoy outran him on the wing. However, in a tribute to the powers of sports science, he came out after half-time as if nothing was wrong and began winning the ball out of the middle. When it emerged after the match that he actually had a fractured fibula, you had to wonder how he had walked, let alone burst through packs with the ball. 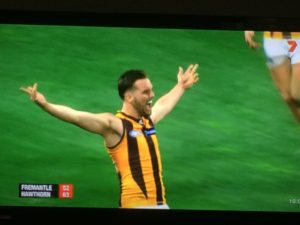 The third quarter followed the pattern of the second, with the margin hovering between 8 – 28 points. Hawthorn couldn’t get the lead beyond five goals and Freo couldn’t get it within one goal. Bradley Hill, Cyril and McEvoy kicked goals, only for Barlow, Mayne and Griffin to respond. Then Fyfe dived across Suckling’s legs right on the siren. Suckling took the free kick from outside 50 metres with four men on the mark sent it curling through – it was the kick heard across the world, or at least by our neighbours, as we roared it home from our lounge room.

The First Rule of Football

The final quarter began with Hawthorn leading by 17 points, but this was reduced to just nine points after Freo opened with a goal and a couple of behinds. It looked like Freo had all the momentum and were going to overrun the Hawks. Then to compound our woes, Hodge limped off the ground.

It wasn’t looking promising until Freo broke the first rule of football: never attempt a longish back pass when Cyril is in the general vicinity. And by ‘general vicinity’ we pretty much include the entire forward 50. Tommy Sheridan dropped the mark and Cyril swooped onto the ball and kicked a goal. 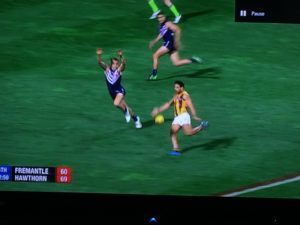 Then they did it again. Cameron Sutcliffe kicked across goal and this time Tendal Mzungu was spoiled by Matt Suckling, allowing Cyril to again swoop on the ball and snap another goal. 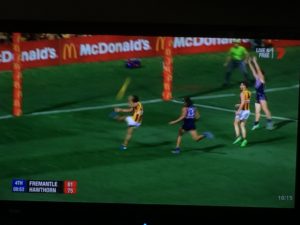 When Taylor Duryea, who had played one of his best games for Hawthorn, won the ball in the midst of three Dockers, and sidestepped all of them to kick a long goal from the boundary, the Hawks were 26 points in front. We were still up on our feet celebrating when Roughead kicked another one – five goals up and surely on our way home for another Grand Final. Glorious. 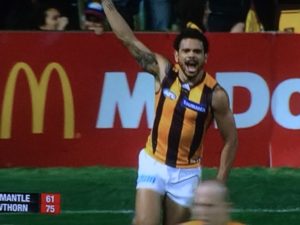 What we learned: Freo fans are feral. Two weeks ago while watching the Qualifying Final between Hawthorn and the Eagles, I opined in my ignorance that Eagles fans were more feral than Freo fans. But events at the Preliminary Final suggest otherwise. Before the game even started, they booed Brian Lake’s kids as they ran off the ground after celebrating his 250th by running through the banner with him. I mean these are six-year old kids. There was the bloke on the boundary who shaped up to either hit or slap Isaac Smith as he ran to collect a bouncing ball near the fence. Then, when Luke Breust was pushed into the fence he was assaulted by a fan wielding an inflatable anchor and verbally abused by another hero leaning over the fence. Plus disturbing footage later emerged of a guy in the crowd wearing a no. 10 Freo jumper punching a woman in the face. Perhaps he was inspired by his number-sake, Michael Walters, who was reported for punching Taylor Duryea after the ¾ time siren, except this was a far more vile and violent act. At least Duryea could reasonably expect to be hit at some point. When Clarko said before the game that Hawthorn had to take the crowd out of it, he wasn’t speaking figuratively; he meant literally, as in soccer style fan lock-outs. Turns out he knew what he was talking about.

What we already knew: ”Ballantyne’s a …” I was watching the match at home with my family and the most dramatic incident occurred late in the second quarter when my eldest son Oscar dropped the c-bomb at Hayden Ballantyne over some typical piece of Ballantynesque interference. This caused his mother to turn on him, and although I also reminded him about appropriate language, there was part of me that thought, well, when the boys’s right, he’s right.