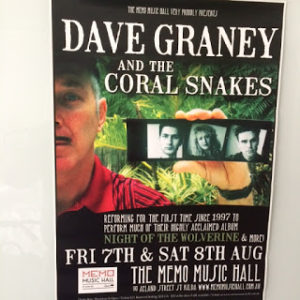 It takes something special to coax my brother Graeme to a gig on a Friday night – especially when he could be at home on the couch watching the Richmond v Adelaide game on TV.

When I saw that Dave Graney and the Coral Snakes were reuniting to play their classic 1993 albun, Night of the Wolverine, I knew that Graeme would be interested. Even so, the step from ‘intrigued’ to ‘making the effort to actually cross town to St Kilda to attend’ is a steep one. As Dave himself observed, ‘you wanna be there, but you don’t wanna travel.’ And had either of us been aware of the clash with a crucial Richmond game, then it’s quite likely he would not have committed.

Still, the promise of after-work beers and one of his favourite bands digging into their back catalogue proved sufficient. When we met our friend Ralph at The Vineyard in St Kilda for a pre-show beer, talk immediately turned to what outfit Dave might sport for the performance. Graeme and I nominated velvet suits of varying hues, while Ralph thought a tasteful safari suit more likely.

In the end Ralph was closest for as the band emerged, it seemed Dave was wearing a tight, charcoal, safari onesie, teamed with a waist length jacket and a brimmed fedora. A classic look to accompany a classic album.

Night of the Wolverine was released in 1993 and marked the beginning of a brief golden period for Graney. It was the first of four albums recorded by The Coral Snakes in a five year period that saw Graney crossover from indie survivor to mainstream curiosity and culminated with him winning best male artist at the fledgling ARIA Awards. At the time he insisted on referring to himself as ‘King of Pop’ – the honorific bestowed upon the most popular male singer in the 1970s version of the Australian music awards. For most people, the enduring memory of Dave Graney is the peacock feather outfit he wore to the awards ceremony.

Friday Night of the Wolverine 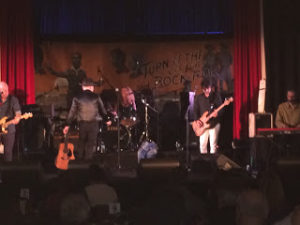 For this reunion show, Dave was accompanied on stage by long-time partner and drummer, Clare Moore, and other surviving Snakes, Robin Cassinder on keyboard and violin, and Rod Hayward on guitar, with Stu Thomas taking the bass in place of the original Andrew Picouleau.

The problem or the advantage, depending on how you look at it, of album shows is that you know the playlist in advance. While this takes out the element of surprise, it does mean you can work out which song you’re prepared to sacrifice for a bar or bathroom run.

With Wolverine, it also means that the two best known songs, You’re Just Too Hip, Baby and Night of the Wolverine come first and third respectively – so if you’re just there for the hits, you can call it an early night and still make it home for the footy.

Being what aficionados call a ‘classic’, however, means that ‘Wolverine’ is more than just the sum of its hits, and so a packed room enjoyed spirited and vibrant renditions of a great set of songs in album order. Tracks like I’m Just Havin’ One of Those Lives, I Held The Cool Breeze and You Need To Suffer are all marked by a distinctive musical motif or lyrical flourish – Clare Moore’s light backing vocal on ‘Cool Breeze’, Hayward’s grungy blues guitar lick on ‘Suffer‘ and the lyrical conceit of ‘I’m Just Havin’ One Of Those Lives’.

One of my favourite tracks on the album is Three Dead Passengers In a Stolen Second Hand Ford. Propelled by Robin Cassinder playing pizzicato on violin, Graney narrates the story of a car accident near the border town of Keith. The song starts with the news of the tragedy and then delves behind the headline to give us some biographical detail of the three unfortunate victims, the personal elements lending poignancy to the song. The song’s country setting is illustrated by a soundtrack of acoustic guitar and violin, which lends the song the air of a bush ballad – but an updated version with mechanical wreckage.

Graney’s performance throughout the set is typically larger than life, his persona and gestures as suitable to the Memo Music Hall stage as they would be to Wembley or Madison Square Gardens. His shadow boxing moves, his little feints and attacks may not be convincing in a UFC cage fight setting, but work well here, showing him as the consummate showman, confident in his material and his performance.

The band played with an assuredness that belied the ‘couple of rehearsals’ Graney admitted to. He advocated a ‘go with the vibe’ approach, which seemed at odds with Moore’s preferred method, as evidenced by her ‘I hate the vibe’ rebuttal. But the vibe was most definitely there, and even if it wasn’t, we were drunk on nostalgia and beer by that stage so wouldn’t have noticed.

The first set concluded with the final two songs on the album; the epic second part of the title track, which proves that if you’ve got a riff that good, you should use it more than once, and the quiet, piano led epitaph of Out There (In The Night of Time).

Half time in the show coincided with the beginning of the third quarter in the football, so we headed into the adjoining RSL Gaming room to take in a bit of the game. Adelaide was getting on top of Richmond at the Adelaide Oval, so it might have been 1993 in the footy as well.

The band returned for a second set of songs taken from subsequent Coral Snakes albums, including, You Wanna Be There, But You Don’t Wanna Travel, The Stars, Baby, The Stars, I’m Goanna Release Your Soul, I’m Not Afraid to be Heavy and Rock n Roll Is Where I Hide with Hayward’s classic angular guitar riff and Graney’s autobiographical meditation on rock stardom.

A suitably upbeat version of Feelin’ Kinda Sporty as the encore sent us home ‘feelin’ kinda nostalgic’ for the mid 90s, a time when the Coral Snakes were a regular live fixture and in our pre-children lives, we could go out on a Friday night and hide in rock and roll.

Night of the Wolverine

I’m Just Havin’ One of Those Lives

I Held The Cool Breeze

I Remember You (You’re The Girl I Love)

That’s The Way It’s Gonna Be

You Need To Suffer

Night of the Wolverine 2

Out There (In The Night of Time)

You Wanna Be There, But You Don’t Wanna Travel

The Stars, Baby, The Stars

I’m Not Afraid to be Heavy

Rock n Roll Is Where I Hide