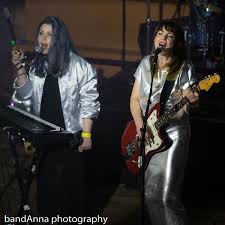 Jade McInally and Jess Cornelius belt out a song
– sensible shoes not shown.
photo by Anna Madden published on planetartsmel.com

At what point, I wonder, does fandom crossover and become stalking? This is my third Teeth & Tongue gig in a 12-month period, so I must be getting close to the line. In my defence, one of those shows was a support slot for Courtney Barnett, and this one at Estonian House is quite close to home, heck it’s virtually on my way home from work, so it would be rude not to turn up.

Even so, a casual observer might conclude that I have a ‘thing’ for singer, Jess Cornelius. They’d be more or less correct too, notwithstanding an age difference that would render it a bit wrong, if not actually illegal, in some states. However, so long as I don’t squeal and faint like a pre-pubescent teen at a One Direction concert, or give this piece a title that references biting, licking or any other acts associated with teeth and tongues, I can probably carry on with the charade that my infatuation with the band is entirely musical. Hmmm, perhaps I should rethink the ‘Grid Girl’ title then?

Teeth & Tongue’s Grids was one of my favourite Australian albums of 2014, along with The Church’s Further Deeper, #1 Dads’ About Face and Total Control’s Typical System. When I say ‘Australian’ I mean it in the traditional sense, in that Jess Cornelius, the songwriter and creative driving force of the band, is from New Zealand. But she is based in Melbourne and her band members are Australian, so they qualify under the Crowded House clause.

Together with collaborators Marc Regueiro-McKelvie and Damian Sullivan, she has produced an album that blends elements of torch song with irresistible 80s alt-pop. Cornelius has a rich, deep voice that lends grandeur and intensity to slower, keyboard led songs such as I Feel Good and adds power to the guitar driven numbers like Easy Living. Equal parts Ute Lemper, Goldfrapp and Siouxsie Sioux, her voice provides sass and strength while clever vocal arrangements with staccato backing add drama and lift the songs from a standard rock setting.

The Ocean Party – photo by Dave Reece, published on speakertv.com

Estonian House is a beautiful old art deco cinema in West Brunswick, converted into a pop-up music venue by the Shadow Electric crew who run the Abbotsford Convent venue. Whatever architectural merit it may possess, however, the mix for first band on the bill, The Ocean Party, was terrible – any subtlety in their sound was rendered impossible to hear from the echoey reverb as their chiming guitar sound filled the cavernous, half-full space only to double back on itself. The mix sounded as messy as their projected backdrop looked – a Joan Miroesque rendering of their name. Still, underneath all of that they sounded interesting enough – sort of Church-esque – so worth checking out perhaps in a smaller venue or via Spotify. 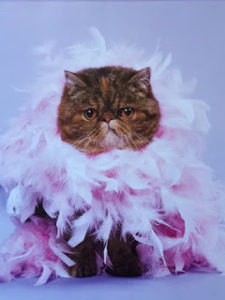 Another defect of the venue, or just the organisation of it, was the bar system. Four staff, one long queue. In fact I spent the best part of Pearls’ set in a long queue that snaked around the venue. The sound for Pearls was equally poor – muddy and flat, so it detracted somewhat from their performance. Not so their backdrop that was bold and bright and depicted a grumpy tabby cat wearing a pink feather boa. The lead singer/guitarist, Ryan Caesar, admitted in between songs that it was indeed his cat.

Pearls is a four-piece with Caesar on guitar and vocals, Ellice Blakeney on drums, Cassandra Kiely on organ and vocals and James Payne on keyboards.

Since I’d last seen Pearls supporting Oh Mercy at the Gasometer Hotel, I’d bought their album, so was familiar with most of their material. They opened with two tracks from the record, STTH(Straight Through The Heart), and Albion, two layered, shimmering songs, and closed their set with Pretend You’re Mine and Big Shot, the two bookends of their album, both big stomping glam rock numbers and perhaps their most striking tracks.

I decided to stand at the front for Teeth & Tongue in the hope that the sound would be better. Besides, I like being close to the performers and there seemed little danger of a violent mosh pit developing to Teeth & Tongue’s mix of 80s guitar pop and cabaret ballads.

It was a low key opening with Jess Cornelius wandering on stage to sing the first song solo. It wasn’t a song I knew, so it was either brand new or so old that the band didn’t know it. Perhaps the band were just finishing their ciggies in the band room or watching the footy – Collingwood was beating Geelong. In the notes that I tapped out on my iPhone, I’ve typed ‘I Want You’ as a clue to the title based on the most oft repeated phrase in the song.

The band joined her as the song ended and they launched into More Than This, The Party Is You and Easy Living, all strong, up-tempo numbers from Grids. On stage were Cornelius (guitar, keyboards and vocals), Marc Regueiro-Mckelvie (guitar and keyboards), Damian Sullivan (bass and keyboards), James Harvey (drums and vocals) and Jade McInally (vocals and percussion).

Jess was wearing a shimmering silver top with matching tight ankle length skirt, which I wouldn’t necessarily feel the need to mention except that she teamed this, not with silver stilettos as you might expect, but with what looked like suede flats with a Velcro strap buckle. Evidently comfort and practicality were more important to her than a commitment to style. The band all wore matching silver Bomber jackets with a stylised T&T logo on the back – recalling 70s pop stars Sherbet during their Howzat era. 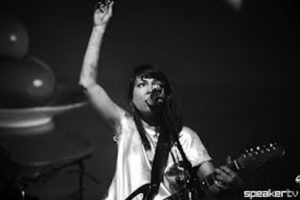 The show had been advertised as a ‘musical and video collaboration’ featuring large scale projections from video and lighting artists. Ocean Party and Pearls had just the one image behind them for their respective sets, but for Teeth & Tongue we got the promised moving pictures.

They were largely simple images with bold primary colours based around a food theme – exotic drinks being sucked up through straws, eggs and apples being peeled, and at one stage a Rubiks Cube puzzle being solved. We never saw the face of the protagonist, just their hands and the items. It wasn’t necessarily an extravaganzas, such as the Sydney Opera House projections for the Vivid festival, but it was at least a diverting backdrop to the band’s performance.

Just as the video montage was more elaborate for Teeth & Tongue, so too was the sound much clearer, crisper and indeed, louder. I don’t know if it was a case of the PA system for the main band being better, as has long been the practice in music, or just the room filling up, but there was a marked improvement. 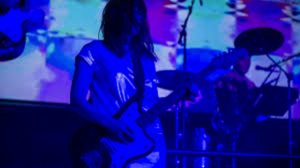 The bulk of the set was drawn from Grids, including perennial highlight, Good Man, and Newborn that brought to the fore the supporting vocals of Jade McInally. In addition to the album material, they also played recent one-off single Cupcake, a cover of The Motels’ Total Control – Cornelius has the sort of sultry voice that can do justice to Martha Davies’ smokey early 80s classic – and a slowed down, stripped back version of Sad Sun from the Tambourine album. They finished the set with a new song that presumably contained a sample from another song – though not one I knew – for the people standing around me all joined in at one point.

For the encore they played Mess You Up, one of the slow, sensual numbers from Grids, bringing to a close a pretty good gig. 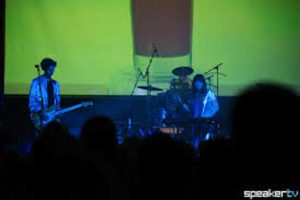 Photos: Although I was standing up the front, I didn’t take any photos at this gig. I have subsequently sourced a few online, mainly from speakertv.com, but also from Anna Madden at planetartsmel.com and Nyk Lee on Twitter.  Also below is a link to whatsoundmelbourne.com who publsihed a great gallery of the night with photos by Anthony Smith 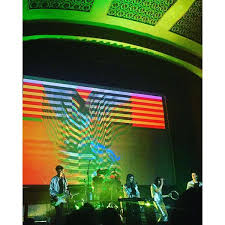 (I Want You)?
More Than This
The Party Is You
Easy Living
I Feel Good
Good Man
Family Home
Cupcake
Total Control
Newborn
Sad Sun
?
Mess You Up

Although Grids had been out for a couple of months, this show at Howler was to be its official launch. My wife Angela likes the album too so she was joining me for the gig, as were a few friends we’d talked into coming.

The idea of seeing a fresh young local band seemed like a good idea at the time we booked tickets, but upon checking the line-up on Howler’s website we saw that Teeth & Tongue weren’t scheduled to come on until 11pm!  Perhaps our younger selves would have relished this timetable, but for 40-somethings – and older in some cases, well my case – with children at home, this was a salient reminder that our lifestyle no longer correlated to the new music scene.

To make things worse, it was a wet and icy cold evening in Melbourne and we’d all left nice warm homes to get to the gig. As a 20-year I would have barely registered the weather, but on this night it presented a compelling reason to stay home. Had we not pre-purchased tickets it’s unlikely we would have made the effort. For this reason we left it as late as possible and so missed the early support acts.

As we arrived, however, Montero were on stage and going for it. A six piece band, half of them throttled their instruments and banged their heads, their long miens shaking wildly, while the other wore short hair and glasses and nodded sagely as they played. It looked like Spinal Tap had merged with Devo.

The lead singer, who I believe is the Montero of the band’s name, looked a little like Kurt Cobain and was wearing an overcoat – a useful enough garment outside, especially given the weather, but less essential in the hot band room at Howler. Still, what is rock and roll if not a forum for the grand, absurd fashion gesture?

The venue was crowded and our late arrival meant that we were stuck up near the back. This wasn’t such a problem except that I found it hard to see, and at times hard to hear over the chatter from those loitering near the bar area, particularly during the quieter numbers such as Boredom.

Still, the band’s performance was good. They opened with Sad Sunfrom previous album, Tambourine before playing some of the material from Grids. Laura Jean joined Jess Cornelius as guest vocalist for Newborn, as she does on the record, but she looked decidedly uncomfortable on stage, almost reluctant to join in. That might just be her normal stage persona, but she couldn’t get off stage quick enough once the song ended.

For the encore they played a great cover of The Motels’ Total Control, then reprised Sad Sun, this time slower and pared back and ended with The Party Is You. They even returned for a final song, the haunting Going South.

It was a polished performance by the band, but the circumstances of the night – the weather, the packed room and the fact that the friends I’d talked into coming evidently weren’t enjoying the band to the same degree as me – did temper my own enjoyment somewhat. I vowed to see them again when possible. In the meantime I picked up a vinyl edition of Grids to celebrate my recently acquired turntable.