A HARD RAIN’S A GONNA FALL

Predictions of steady rain had gradually morphed into dire warnings of a mega storm on the day of Feist’s Melbourne performance. The normally staid Bureau of Meteorology had said that it would be an unprecedented rain event and that on a scale of 1-10, this would be a 10. Events across Melbourne were duly cancelled, businesses were closed and bosses told workers to stay at home. The apocalypse, it seemed, was coming.

I still hoped we’d get to see Feist; I mean if the world was ending anyway, we may as well go out with a soundtrack. Sure, those seeing The Church around the corner at 170 Russell might get to hear something more appropriate, assuming the Kilbey and the boys played new songs, Undersea and Before the Deluge. But the faux Roman statutory in the Forum created a Nero fiddling as Rome burned kinda vibe, or in this case, Feist strumming as Melbourne drowned. So that seemed just as suitable.

And look sure, there was a heavy downpour mid-afternoon, but it didn’t last all that long, and at worst most things were just a bit damp for the rest of the day.

I caught a train into the city and met Angela, and our friends John and Kate at Movida Next Door for pre-show dinner and drinks. It is next door to the Forum, but derives its name for being next door to Movida – the main restaurant.

While we were dining we could see the queue for Feist forming up Hosier Lane. Presumably these people were trying to nab one of the booths, because I couldn’t work out why else you’d queue outside for an hour ahead of the showtime. 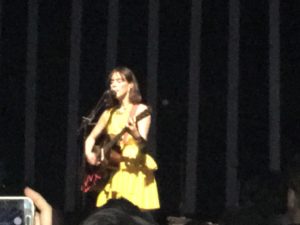 Feist was playing the entire show with no support act and there was still plenty of time, so we grabbed some drinks and milled down near the mosh area.

When Feist appeared she was accompanied by three band members, including a guitar/keyboard player, bass and a drummer who was set up on the side. Feist was wearing a bright marigold dress – the sort you might wear to a wedding if you particularly wanted to stand out.

She announced straight up that they’d play through the new album, Pleasure, in its entirety, and then play a few old songs. Fine by me, I like the new album, but I thought it was a reasonably brave move given that the record hasn’t greatly troubled even the indie charts. However, Kate thought it was braver of Feist to wear a yellow dress with gold jewellery.

The sound in the room wasn’t great and the mix didn’t quite reconcile Feist’s high register, the sparseness of the arrangements and the high ceiling of the venue. It left lots of space in the mix for echo to take hold and made it difficult to make out what she was singing. I was familiar with the new record so I didn’t notice so much, but Angela couldn’t make out any of the words. It became even harder when she set up some loops to create circular vocal arrangements that presented us with several Feist’s singing at once.

The lighting was effective. Kate pointed out that it was based on Bowie’s ’78 Isolar tour – a series of perpendicular vertical poles that lit up in unison. Mostly they remained amber, so served as a matching accessory to Feist’s outfit.

Feist was quite personable; at one point she got a singalong going of Kookaburra Sits in the Old Gum Tree. She tried to get us to sing an Australian Christmas song, Six White Boomers, but it never quite took hold. Obviously, no one had told her that it is no longer the done thing to sing Rolf Harris. 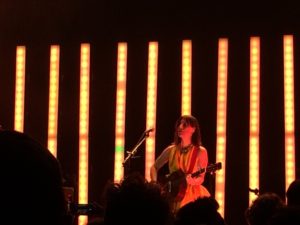 Of the songs from the new album, the highlights were Lost Dreams, Any Party and A Man is Not His Song, as well as Century – although it was disappointing that we got a recording of Jarvis Cocker’s monologue and not Jarvis in person.

The second half of the show was a run through some of her better known songs from earlier albums. I was pleased to hear a few tracks from Metals, which is my pick of her work. A dynamic version of A Commotion with its driving, repetitive staccato rhythm and the swagger of The Bad in Each Other were highlights. She also inserted a whistling solo in Caught a Long Wind.

She closed her set with Let it Die, which thematically at least is a good song on which to end.

When they returned Feist opened up the encore to requests, but admitted she was waiting to hear someone yell out the song she was planning to play, Mushaboom. Fittingly she finished with her one bona fide pop hit, 1234, written by Australia’s own Sally Seltman. 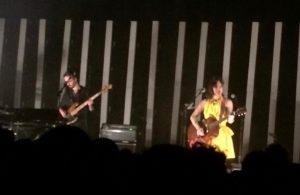 Melbourne’s mega storm may not have wreaked the expected havoc, but then Feist wasn’t as feisty as her name suggests either. In fact, she was downright gracious and charming – she’ll never make it in the music industry with that approach. It was, as she said in her opening song, a pleasure. 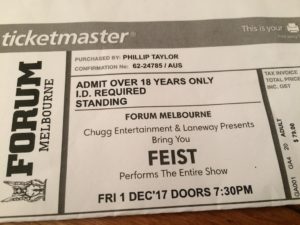 I Wish I Didn’t Miss You
Get Not High, Get Not Low
Lost Dreams
Any Party
A Man is not his Song
The Wind
Century
Baby Be Simple
I’m Not Running Away
Young Up
————
My Moon, My Man
A Commotion
Sealion
The Bad in Each Other
Caught a Long Wind
I Feel it All
Let it Die
————-
Mushaboom
1234