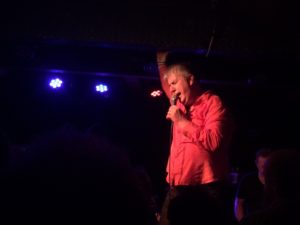 Chris Marshall is a big man with an even bigger voice. He may have been wearing a salmon coloured shirt, but he still cut an intimidating figure as he loomed over the audience from the top of the foldback speaker. As his brother Charlie Marshall fired up the opening riff, Chris Wilson summoned an almighty howl from his harmonica and Chris Marshall gave a guttural yelp as he bellowed out the opening line of Open Up and Bleed. Thus did we begin a raucous, rollicking night of hyper gothic blues and the first Harem Scarem gig in many years.

The sweat didn’t take long to dot Marshall’s shirt in dark splotches as he lurched about the stage, pointing a menacing finger in our direction, punching the mic or dropping to his knees to continue his caterwauling. It was loud and unruly; the sort of gig that reminded me of why I like going to gigs.

This was a one-off reunion show to celebrate the digital launch of their back catalogue – i.e. two and a bit albums. I haven’t seen them play since they broke up in the late 1980s. I met my old friend Lachlan and his brother Johnny at the gig, who I haven’t seen in nearly as long.

Lachlan is a greater authority on the band than me and he told me they’ve played once or twice since they broke up, but even so, with two or three gigs in 30 years, there is little danger of them saturating the market.

My memory of seeing Harem Scarem play is with Lachlan and our friend Phillip at the Prince of Wales Hotel in St Kilda on Thursday nights – the free night at the Prince. So it was fitting that my first catch up with Lachlan after so many years should be at a Harem Scarem gig. Again on a Thursday night, except we were older now and happy to pay. We caught up on a few old times and mutual friends, but mainly we talked about music. It is what has always bound us together and it was why we were at the Gasometer on this night. 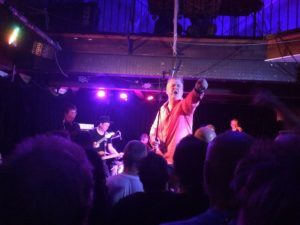 We squeezed into the middle of the room after the support act finished. It was a sold out gig and the place was packed, mainly with 50+ year old men. I don’t know if they were necessarily fans of the band or whether they’d just seen the word ‘Harem’ and thought, ‘yes, that’s for me’, but it was very congested in front of the stage.

People had taken every vantage point on the stairs and in the upstairs balcony, while the band crowded into the small stage space. It was hot and sweaty once they closed the roof and any thoughts of getting to the bar, let alone back again, had to be banished.

In addition to Wilson and the Marshall brothers, the band consisted of Barry Palmer on guitar, Ash Davies on drums and a guy on bass whose identity I don’t know, but Lachlan said he was from the band X. He looked a little like a short Keith Richards with his wide brimmed hat, pout and, I think, eyeliner, unless they were just dark rock ‘n roll rings around his eyes. Dave Moll, another former member, also joined them on guitar for a few numbers. 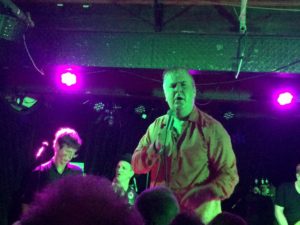 The set was drawn mainly from their first album, Pilgrim’s Progress. No surprises there for it is an acknowledged masterpiece of Oz rock, but the songs were performed with far more grunt than on their classic debut.

Words cannot convey the power of the performance or the visceral punch of the music and Chris Marshall’s singing. His voice has grown more resonant with age. Even as a twenty-something when the band were starting out he had the voice of an old bluesman. It sounded slightly incongruous then, this big, deep blues growl emerging from the lips of a fresh-faced young man, a ‘young pup’ as Lachlan called him. But now that he’s into his 50s (I assume) he’s grown into his voice and inhabits it with greater conviction. 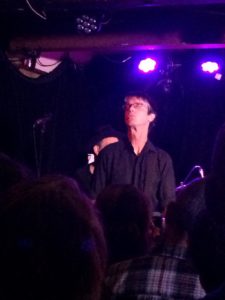 There was a glorious unpredictability about Chris Marshall’s stage performance that was both exhilarating and slightly dangerous. He stood on top of the foldback speaker and leaned into the crowd. He eyeballed those close to the front, thrust an arm out here and jabbed a finger there. He turned his back on us and disappeared from view as he fell to the ground, or turned to the band and implored them to “take it down, take it down” as he slipped into a whispered monologue. Or he pushed the microphone out to us, not so much inviting us to sing the chorus to Animal Tracks as daring us not to. He punched the microphone, ground the stand into the stage, swung from the metal beam above his head and threatened to accidentally bring down the whole lighting and PA rig as he reeled about the stage and caught his fingers on precariously placed wires. But his voice was phenomenal – like late Jim Morrison meets Tom Waits, but deeper – and it alone shook the walls.

Band members looked to guitarist Charlie Marshall for their cues, while Charlie looked to brother Chris for his. But they were well-rehearsed and the playing was as tight as it had ever been, probably tighter.

In amongst songs from Pilgrim’s Progress they played the odd track from Dogman and Lo and Behold. They didn’t play Long Time Between Drinks, even though it had been. Charlie took vocal duties on One in the Same and all the while Chris Wilson took an unassuming position up the back and breathed into his harmonica to generate an almost continuous caterwaul.

For me the highlights of the set were Run on Down the Line and Dogman, before Miracle Mile brought the set to a climactic and rowdy end with the audience shouting out the ‘Everybody…Everybody!’ refrain. 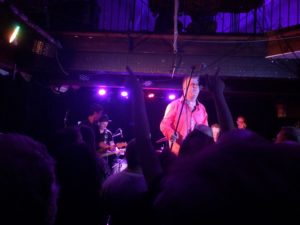 The backstage area of the Gasometer is so cramped that there wasn’t sufficient room for the entire band to exit, so Wilson just remained in place and waited until the others rejoined him for the encore.  When they returned they played a spirited encore of Dead of the Night and My Town before closing with a boisterous version of Hard Rain.

It was after 11.30 when they finished, which is late for a weeknight, but given I hadn’t seen them for 30 years, the end of the show seemed to come very quickly. Still, if you’re only going to play one gig every 20 years or so, it may as well be as good as this one.

After Harem Scarem, in the space of the next nine nights, I’ll have also seen Midnight Oil, The Pretenders and The Aints; that will be four gigs by bands with barely a song written since 1988 between them. However, it is hard to imagine any of these other more seasoned bands generating anything like the same amount of energy as Harem Scarem, even the Oils.

Open Up and Bleed 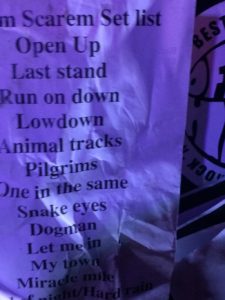 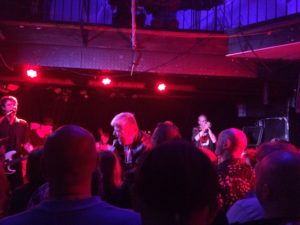