CAUGHT IN THEIR WEB 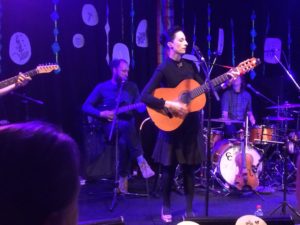 There are many reasons people go to live music events; to dance and singalong, hang out with friends, listen to virtuoso musicians, drink overpriced beers or just check out goth chicks – okay, perhaps that last one is just me. Less common I suspect is it for people go to a live band to take in a history lesson on various niche topics relating to Melbourne’s past. Yet that is one of the chief delights of any Orbweavers gig, certainly this one.

The Orbweavers are Melbourne duo Marita Dyson and Stuart Flanagan who play gentle folk-pop songs that delve into the minutia of Melbourne’s past. Songs about the Merri Creek and Spotswood for example, or their work as academics and archivists in some branch of the natural sciences. Not the traditional stuff of popular song it’s true, and perhaps their music would find a bigger audience if they injected a bit more sex, drugs and lust into it, but you can’t argue with a sold out show.

This was a Sunday matinee show to launch their new album, Deep Leads, at the Northcote Social Club – I had to cross Merri Creek to get there. It was only $12.46 a ticket (how did they arrive at that price point?), so there was no excuse to not go. Close to home, affordable and I’d be home in time for the The Dr Blake Mysteries on the ABC. It really couldn’t have been more convenient. Adding to the appeal for me was that the support act was Biddy Connor, with whom I once shared a house in the early 1990s. 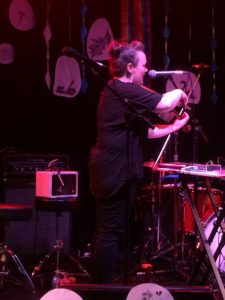 Biddy was accompanied by Dave Williams on drums. She is a multi-instrumentalist, composer, vocalist and all-round nice person who on this occasion played keyboards, viola and fed loops and other recordings through a laptop. So far, so post modern, but she also played the saw – as in the household carpentry tool – by bending it as she coaxed notes from it with a viola bow. It didn’t seem to have much in the way of teeth, so I’m not sure how useful it would be for joinery, but it certainly made it less hazardous to play. It was also a little more musical than the chainsaw SPK once wielded at their shows.

Their pieces were quiet and esoteric, as the use of a saw suggests, with Biddy adding occasional vocals or overlaying a melody with viola, while Williams provided a gentle and thoughtful percussive accompaniment. As parents of a drummer, Angela and I were impressed by his subtlety.

The audience, who had been kept waiting outside for over an hour past the scheduled start time, were attentive and supportive throughout, except for a few toddlers who ran back and forth in front of the stage.

The delay was officially attributed to the sound check, but I suspect it had far more to do with sticking hundreds of illustrations around the room and setting up the bucolic lattice across the front of the stage. Either that or the venue just wanted to sell more burgers in the bistro.

There was no overt sign of frustration or impatience from the audience, even if I was slightly annoyed by people sitting on the ground. I credit this to the soothing, interesting music played by Biddy and Williams, and perhaps the extra afternoon bevy we’d imbibed during the delay. 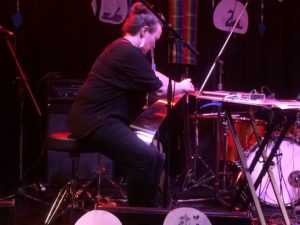 The Orbweavers usually play as a duo, but on this occasion they came with a full band. There was Marita Dyson on acoustic guitar and Stuart Flanagan on electric guitar, as well as Jen Sholakis on drums, someone on bass who looked familiar from other bands – was he from Architecture in Helsinki perhaps, or was I not seeing past the beard, Stuart Lindsay on keyboards, who I was surprised to note was a guy from my work, a two piece brass section, plus Biddy and Williams doubling up.

They opened with Horseshoe Lake, a song from previous album Loom, and then began playing the songs from the new album. Dyson admitted to nerves playing these songs to an audience for the first time, and cited that as a possible reason for her long-winded intros. 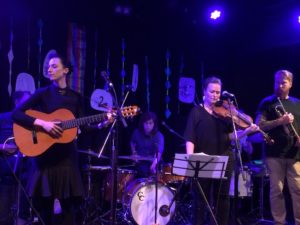 But she is a highly entertaining raconteur and her elongated, round-about song intros were the highlight of the afternoon. There is no point recounting her stories because their treasures are all in the telling, but we learnt about the dangers of backyard plants (Poison Garden), the slug that lives in her bathroom (Inverterbrate City), a lake that once existed around the Docklands and West Melbourne and her attempts to locate it (Blue Lake), and the women who after WWI painted radium dials for clocks and watches unaware of the dangers of lead (Radium Girls).

The band members exchanged amused glances as Dyson’s monologues continued beyond three or four minutes. Some of her introductions were indeed longer than the songs they were introducing. This could be annoying with someone else, Ryan Adams for example, but Dyson is so charming and pleasant, and above all, interesting, that it was an absolute delight to listen to her. 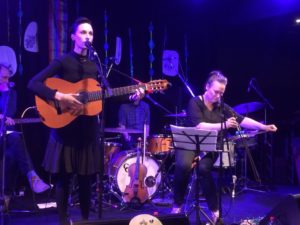 Angela and I both agreed that in fact the songs didn’t always live up to the billing she gave them. This is not a critique of the songs as such, but simply to highlight how entertaining her banter was. The songs all followed a gentle folky template – only Mine, with its masculine bush ballad chorus broke the mould.

They returned to play two of their best known songs, Spotswood and Merri to round out a great afternoon of music and story telling. They really should have their own variety hour TV show. 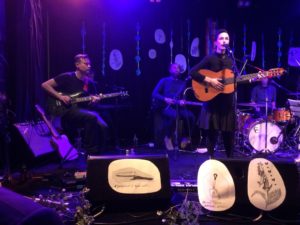