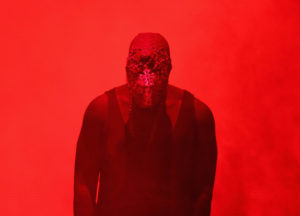 I’m a 50 year old white guy, born in Melbourne and have lived here all my life. By now I know what I like; be it bands (post-punk), books (post modern) or bitches – I can say that, after all, this is a Kanye review – (post pubescent, preferably brunette). My predilections and preferences are so rusted on that they even bore me at times.

Equally the converse is true; I also know what I don’t like. In music that means that heavy metal is for bogans, country & western is for hicks, disco sucks and rap is crap.

Having adopted these positions eons ago, I have abided by them more or less without thinking ever since. It’s like choosing your footy team, once you’ve got one you stick with it. Sometimes I think it’s only my prejudices that are keeping me alive.

The thing is that to change your opinion on any of these previously held certainties takes time, effort and the willingness to admit that you might have been a bit pig-headed, misguided and even ignorant for all those years. These are not usually character traits one self-diagnoses so it’s easier just to stick with your espoused position.

However, over time I’ve become more flexible in my views and have expanded my outlook to take in a wider vista of musical genres.

In the 90s, the mix ‘n match of DJ Shadow and the trance beats of Massive Attack and Tricky brought me to hip hop, then the songwriting of Ryan Adams and Wilco brought alt-country into my world, although I still strenuously avoid the western. Perhaps most surprisingly, the diverse musical palette and humour of Kanye West eventually brought me to rap. Metal, however, is still very much for bogans. 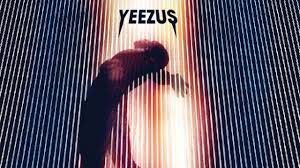 It’s fair to say I came to Kanye late – in fact just a few days before this gig to be precise. This was the second of his Yeezus shows in Melbourne. A week earlier I could barely have named one of his songs.

What I knew about Kanye was pretty much gleaned from the outrage he sparked with his self-aggrandising pronouncements, childish tantrums, his rants and the fact that he married a Kardashian. None of this, it has to be said, reflected particularly well on him in my view, but it would be a naive person, and one with very narrow music library, who based their musical taste on the impeccable morality of the artist. I mean, the Stones would never have sold any records. So being a narcissistic misogynist shouldn’t rule out Kanye.

Of course this is true, and nothing I have learned since has changed my view, but there is far more to him than that, most obviously the music. So to base my judgement of his music on personality traits rather than his beats and his rapping is a bit like dismissing The Doors because Jim Morrison was fond of a tipple, or Michael Jackson’s music because he was perhaps overly fond of children, kept a pet chimpanzee and was trans-race. Mostly true, but you still can’t resist dancing to Billie Jean. 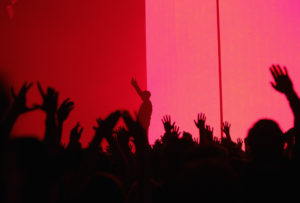 A colleague of mine at work, Lia, thought Kanye a genius, smirked at his various outrages while listening to his albums and chuckled at my ignorance of all things rap (I once referred to Jay Z as Jay Zed). She knew I was missing out, but she also knew enough about me and middle-aged white guys stuck in their ways to bother trying to change my view. Not her job. But I respected Lia’s opinion on all things so I never completely closed out Kanye.

I read reviews of Yeezus when it was released. I followed reports of his tour in The Guardian online – they’re a little bit obsessed with Kanye – and even if I didn’t actually listen to his music, I was aware of the general vibe surrounding it.

Just a week or so ago, another colleague, Steph, was sharing her excitement at having tickets to see Kanye’s show at Rod Laver Arena. So it was fresh in my mind when the next day I was watching Rage and saw Kanye West’s name appear on the screen. I turned up the volume so that if nothing else I could form an opinion, even an uninformed one.

But what I heard was astounding. I don’t think I’ve ever heard anything so tribal and menacing and the accompanying video clip was equally disturbing…in a good way. The song was Black Skinhead and I downloaded the album Yeezus that night. It was almost life changing. I couldn’t believe how much I loved it.

The opening of Black Skinhead with its tribal beats, glam guitar and heavy breathing is reminiscent of Gary Glitter’s Rock ‘n’ Roll – of course the heavy breathing makes more sense now that we know what sort of material Gary Glitter stored on his hard drive. Likewise with Kanye, although even a cursory listen to his lyrics reveals that unlike Glitter, he makes no secrets of his predilections – which are many and varied and loudly declared. The soundtrack of the album is stark, brutal and minimalist, but lyrically it is audacious and outrageous, in turn very funny (I Am God), reasonably profound (Blood on the Leaves) and just downright provocative (Hold My Liquor).

Just as Steph reported how good the concert was, I received an email alert from the booking agency promoting last minute half price tickets for the second show that night. Half-price, I should point out, was still $81 plus the ever mounting booking fees, but why not I thought. I was going to see Kanye West! I was just glad that Lia had moved on and wasn’t afforded the opportunity to gloat. 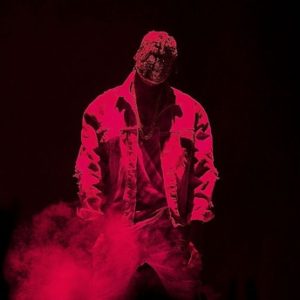 My seat was nearly as far away from the stage as you can get: I was in the second back row but nicely placed on the aisle so I could nick out for a beer at a convenient moment.

Kanye kept us waiting for a while and now that I was familiar with his habits, as enumerated on the album, I could only speculate with some envy as to what might be keeping him. Still it gave me time to crowd watch. Most of the crowd were straining to catch a glimpse of Kim Kardashian, who was presumed to be in da house. The people in front of me thought they could see her near the mixing desk. I may have been new to Kanye and his ilk, but I doubted very much that Kim Kardashian would be mixing it with the punters in the general admission area.

In fact she could have been sitting next to me for all I know; I was far more excited to see several members of the Hawthorn football team in the private box directly behind me! Fresh from a Qualifying Final triumph over arch enemy Geelong, the presence of my football heroes reaffirmed that I was in the right place and among my people. I wouldn’t have noticed if Kim K or Kanye himself pushed past me.

The show peaked early for me. West appeared on a stage in a beam of light (and a bejewelled mask) just as the introductory Star Wars music morphed into the distorted guitar feedback intro of Black Skinhead.

Kanye bounced about the stage spitting his invective while those in the mosh pit jostled each other, seeming to move in choreographed waves.

The stage itself jutted out in like an catwalk and featured large video screens positioned so that from my vantage point, they looked like a gigantic obelisk. The screens were blood red as Kanye ranted through Black Skinhead and his figure appeared in silhouette.

I could make out someone hidden at the back of the stage playing instruments, but they were largely obscured by a screen, so whether there was a full band or one person with banks of keyboards, decks and effects pedals, I couldn’t say. But the minimalist music of Yeezus also influenced the set design which was dark and stark. Besides, all eyes were on Kanye.

For someone who sings a song in which he inventories the various types of illumination “strobe lights, flash lights, street lights,” etc, it was strangely dark on stage.

There were baffling moments when everyone, except me, knew to hold their hands in the air and bring thumbs and index fingers together to form a sort of diamond shape. People also did that one-armed hip hop wave that looks like an involuntary Nazi salute. There were also surreal sing-a-long moments, such as the start of a song where everyone knew the words, so much so that Kanye didn’t bother singing them himself, yet not only did I not know the words, I’d never even heard the song before. That’s when you realise you’re part of a different generation and genre.

I was familiar with the run of songs that included New Slaves, Power, Stronger and Runaway; and was even able to join in New Slaves‘ mass sing-a-long of, “I’d rather be a dick than a swallower.”

Runaway was an epic that roused the audience to new levels of excitement, especially when he removed his mask. Even I was feeling the buzz.

The sound was surprisingly good and echo-free, especially given where I was seated. His voice was clear and prominent in the mix, and even if I couldn’t understand every word, that was more the result of my unfamiliarity with the genre, rather than his delivery.

He used the staging and lighting to tremendous effect, striking dramatic and choreographed poses that accentuated the image of the lone artist. He was often in silhouette and his mask added to the sense of enigma and his experiments in theatrical form. 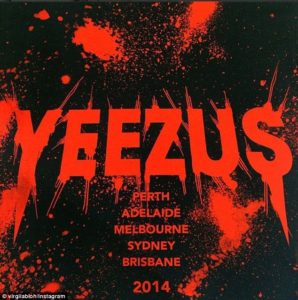 Disappointingly we didn’t get one of his notorious 10 minute rants about the fashion mafia or whatever other imagined slight he’d recently experienced, unless he was rapping and I just thought it was part of a song. There was some verbiage about not being controlled by the media, but it hardly constituted the sort of whinge festival I’d been expecting. He was almost the consummate professional.

He had caused minor scandal with handicapped groups from a previous gig when he stopped a show because he noticed someone not dancing – only to learn that the person was in a wheelchair. So when he called for everyone to get up and he saw a pair of crutches being waved in the air he appreciated the commitment and singled out the punter for particular praise, as well as an example for anyone who remained seated.

The encore was one of the more unusual I’ve ever witnessed. He opened with Blood on the Leaves, asking the audience in front of the stage to form ever larger circles, presumably so they could run at each other – ‘Ring around the Rosy’ style. Dissatisfied with the result he played it again, stopping the flow to repeatedly demand ever larger circles.

Even more bizarrely, he finished with N**** in Paris, which brought the house down – so much so that he played it three times, each time demanding ever bigger crowd circles. It was partly frustrating and partly hilarious, but Kanye seemed to be having fun and by the end he was thanking us and calling each one of us one of his n’s – I can’t say the word but I nevertheless felt privileged to be counted among his number and knowing I’d seen a groundbreaking show by a true artist.

If the Hawks can bring the same amount of energy, anger, self-importance and theatre to the rest of their finals campaign, then I’m in for a great September. 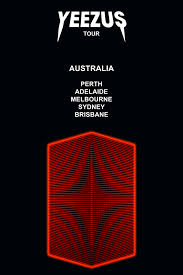