KEEPIN’ IT REAL WITH KENDRICK

I’m not saying I looked out of place amongst the Kendrick Lamar fans at Rod Laver Arena, but the guy emptying the bins in the concourse looked me up down and asked me what I was doing there. After all, he had just cause, or at least a job, whereas my purpose was altogether less clear-cut.

‘I’m a friend of the drummer’ was probably not going to convince him, so I simply said I was an afficianado of the urban groove aesthetic seeking existential truth through the counterpoint of repetitive syncopated beat patterns and political outcry expressed in the rapid rhyme and rhythmic intensity of street vernacular.

“I brought my kids” is what I actually told him. Turns out he’d never heard of Kendrick Lamar but thought the crowd looked interesting – hence his confusion over my presence.

It’s true, officially I was attending Kendrick Lamar’s show as a chaperone for my 16 year old son Declan and his friend, Matteo. My other son Oscar and his friend Michael were also there. But I’ wasn’t just chaperoning; I’d bought the tickets (a 3-hour multi-transaction ordeal in itself) and driven them to the show. Plus my credit card was required at the merch stand. So there were myriad reasons for me to be there. Lucky I also happen to like Kendrick Lamar’s music, because it was an expensive night out.

I ended up sitting by myself on the side in the third back row. Buying the tickets I was in an online queue for three hours as I watched the first show sell-out, then a second. Eventually I got in but couldn’t buy more than two tickets together, so had to make three separate transactions so we could all get in. This might be one reason all the tickets end up in the hands of scalpers, because although it took three hours to get to the front of the queue, once I was in the booking system I could just keep making bookings. So much for ticket limits and delayed printing.

Of course as soon as I’d fulfilled my usefulness at the merch stand and food outlets the boys ditched me. It seems that hanging out with your dad is not very gangsta. As Kendrick might put it, ‘Bitch, don’t kill my vibe.’ So I got a beer and took a seat, where I met my friend emptying the bins. 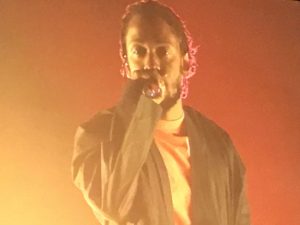 The show began with a video snippet of Kendrick in the guise of martial arts exponent Kung Fu Kenny, who was embarking on some sort of quest. We would return periodically to chapters of the story throughout the show during staging delays. The audience seemed to respond well to the video, although it is unlikely to find a home outside the concert setting and those who might describe themselves as ‘woke’ might even detect signs of cultural appropriation.

Thankfully the opening sequence was interrupted by Lamar rising up through a trap door chanting “I got I got I got I got…” as DNA’s stark, beats kicked in and the audience, already on their feet, roared and raised their iPhones to get fuzzy, out of focus photos – me among them from my eyrie on the side. 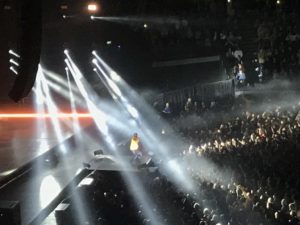 I’m sure it was not lost on Lamar that at almost the exact time he sang, “I just win again, then win again like Wimbledon, I serve…” the Wimbledon Women’s final was getting underway between Serena Williams and Angela Kerber.

A few songs later he performed King Kunta and that was my two favourite Lamar songs out of the way early. I got so carried away during Kunta I forgot I was the wrong side of 50 and raised my arm in rap salute along with those around me.

The band were set up in the wings. I could see four of them, but I’m not sure how many there were in total. They were remarkable, even if they did have a little help from some pre-recorded snippets. In particular the drummer. 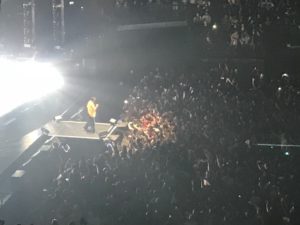 This left Lamar alone on a massive stage, with ever changing video imagery as a backdrop. He was joined on stage by a sword wielding samurai for DNA and a dancer for another song – although in truth they added little. And Lamar certainly didn’t need any assistance holding the audience’s attention. He stalked the front of the stage, leaned out to emphasise a point, or squatted on his heels and just looked out into the sea of iPhones pointed in his direction. It was a measure of his magnetism that he allowed pauses to form as he took in the crowd.

Most of the set was taken from DAMN. and good kid, m.A.A.d city, with only a couple of songs from To Pimp a Butterfly. 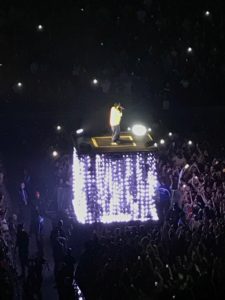 For me, the slower, softer songs worked best, in particular PRIDE, which Lamar performed while harnessed to a pole perpendicular to the stage as if levitating. The dancer was below him in the same position. I’m not sure what this signified, but it certainly looked odd. Even so, the song was sublime.

He performed LUST from a separate stage in the middle of the mosh pit. Set within a cage of lights, it slowly rose until he was atop a giant podium. To be honest I’m not sure that the effect warranted the effort, but it did at least shift our focus.

The show ended with HUMBLE which Lamar kicked off before allowing the audience to take over. As energising as it was to hear 15,000 people sing, “Sit down bitch, be humble,” the part of that song I most like is the staccato, dissonant piano, so I was pleased when the a capella version ended and Lamar kicked it off again – this time singing it through himself.

It was a stunning show, notwithstanding the conclusion of Kung Fu Kenny, and even if I was a bit out of place, I felt like I was right where I needed to be. 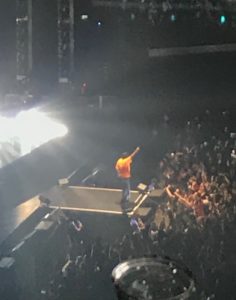 All the Stars
Pray for Me