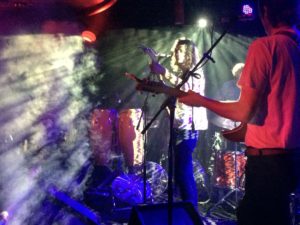 To the uninitiated King Gizzard and the Lizard Wizard could be either a psychedelic rock band or a children’s cartoon series. Even the title of the show, Flying Microtonal Banana, doesn’t really clear things up. It’s only that the show is late on a Friday night at The Night Cat in Fitzroy that you can make an educated guess.

It’s tempting to view King Gizzard and the Lizard Wizard as part of a burgeoning Australian psychedelic scene, but I think it’s pretty much just them, Tame Impala and the various Impala spin-offs. If nothing else, they are the only band with more ‘z’s in their name than ZZ Top and Jay Z combined.

This was something like the ninth sold out show at The Night Cat to launch their new album. Like Adele last weekend, King Gizzard and the Lizard Wizard are playing in the round. ‘In the round’ is fast becoming the new black in staging, or the new proscenium at least. The only difference is that while Adele played two shows in Melbourne to 75,000 people each, ‘The Gizz,’ as they are known, have played nine shows to about 500 people. So by my calculations, they’d need to play another 290 odd shows to match Adele for crowd aggregate.

I’m sure they could do it, but it wouldn’t leave them much time to meet their stated kpi of releasing five studio albums this year – of which Flying Microtonal Banana is the first. Five albums in one year may seem ambitious, unless you’re The Fall, but when you listen to Flying Microtonal Banana, you realise that it is essentially three or four actual songs with variations on each turned into extended jams. Whether they use actual microtones I’m afraid I’m not qualified to say.

Take lead track Rattlesnake for instance. Whereas Lloyd Cole’s song of the same name is littered with references to literature and cinema, and depicts the complexities of being a modern woman grappling with independence, freedom and feminism, King Gizzard’s song is basically a repetitious chant of the word ‘Rattlesnake Rattlesnake Rattlesnake Rattlesnake…rattle rattle rattle.’ There’s a few other words thrown in along the way, but it’s not exactly a David Attenborough-esque study of fauna. What it does have, which neither Lloyd Cole nor the venerable naturalist can boast, is a killer guitar riff driving the whole shebang. 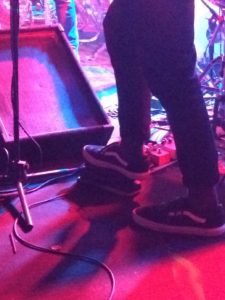 For the first set I was on the side close to the stage, so I had a perfect view of the main action – by which I mean Joey Walker’s wah-wah pedal. He uses it in the way fitness enthusiasts use treadmills. I haven’t heard this much wah-wah since Frampton Comes Alive was number 1 for most of 1976.

The Gizz are a big seven-piece band so once the stage was set up and loaded with instruments, including two drum kits, synths, bongos etc, there wasn’t much ‘round’ for the audience to be ‘in’. Basically, we were all near the front one way or another.

The first set consisted of tracks from the new album as well as a new song.

Open Water kicked things off with its dual drumming, chugging rhythms and spaced out guitars. The playing was tight and the sound mix was excellent, but then you’d be worried if they hadn’t got that sorted out by the ninth show.

Despite playing in the round, the band members pretty much remained facing in the same direction for the entire show. This may suggest they haven’t quite understood the point of the format, but with so many of them packed into their cage, there wasn’t much room for them to turn around, let alone move around.

The first set finished with three of the new album’s highlights; Sleep Drifter, the absolutely cracking Nuclear Fusion, introduced by Joey Walker giving the talk box guitar effect a work out, and the relentless head banging rock of Rattlesnake with its euphoric, almost hypnotic chant of the song’s title. If it’s true that rattlesnake venom contains strong quantities of hallucinogens, then the band managed to channel some of that potency into this song, for the first set certainly ended on a high.

The Wizards of Oz 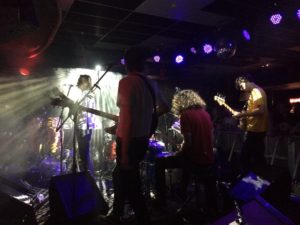 I grabbed a beer, bought some t-shirts for my sons and took a seat in one of the booths for the second set. It meant that most the of the band had their backs to me for the second half of the show, but it was late on a Friday night, I was tired and didn’t particularly want to be crowded in.

It’s probably a good thing that I did because things became a little more riotous in the second half. With the band pumping out a succession of crowd pleasers, the audience became increasingly rambunctious.

One of the security guards sitting in the band cage had his back to the musicians and was alternately trying to stop the crowd surfing and in the next moment leading the charge in head-banging, fist-pumping exuberance. He evidently didn’t see the cause and effect between one action and the other. Still, from an audience perspective, you know you’re in safe hands when the security detail is enjoying the band as much as you.

The crowd surfers were playing an intricate game of balance in more ways than one.  The ceiling was extremely low in that section of the room, so they were having to chart a very deft course between arms and roof. There was almost an element of pipeline about it.

The set itself was more like an extended jam with one song morphing into the next. They played Altered Beast, which I think is a new song, Robot Stop, Evil Death Roll and Cellophane, incorporating snippets of Rattlesnake, Altered Beast and possibly others that recurred intermittently. All of which highlighted how tightly tuned their live show has become. 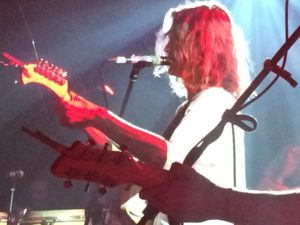 I sat up the back and enjoyed watching the audience going off. In addition to the crowd surfing, there were grown men standing on seats waving glow sticks about and girls who looked like they were rehearsing for some sort of synchronised dance routine, again with glow sticks. Who, other than Bieber fans, brings their own glow sticks to a concert? The bar staff all had elaborate ‘Kiss’ type eye make-up, I’m not sure if this was a King Gizzard thing, or just their normal look.

The band, meanwhile, just kept playing. To be honest the music all became a bit of a blur to me. The setlist below is from setlist.com and is from one of their other shows at The Night Cat – but it’s pretty close if not identical to what I heard on the Friday night show. The problem was that for the most part I couldn’t tell when one song ended and the next began.

Gamma Knife was the highlight of the second set, but on the whole I thought some of the other extended jams tended to drag a bit. Not that the people crowd surfing would agree. The hard core fans at the front were still going off and gave every indication that as long as Eric Moore and Michael Cavanagh kept up their metronomic drumming, they’d also keep going. Special shout out to the drumming duo – they were superb. 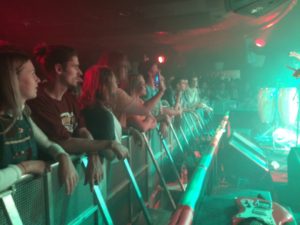 During the day I’d proof-read the introduction to my wife’s thesis about embodiment and the creative process that referred to, “….experiences that suggest a more multifarious, multidimensional, omnidirectional, immersive account of lived experience” which, it struck me, also applies to King Gizzard and the Lizard Wizard’s live show, just with more wah-wah pedal.

I don’t know if they’ll be able to maintain consistent quality over five albums in one year, but each of their nine albums so far has contained at least one or two genuine classics. So either way, with a discography that already includes Hot Wax, Gamma Knife and Nuclear Fusion, by the end of the year they’ll have the material for one of the greatest compilation albums you might ever wish to hear. In the meantime we can only look forward to their next album launch, which should be any week now.