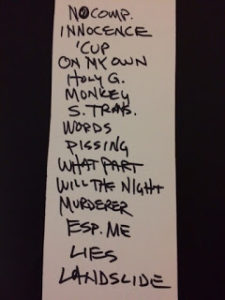 The universe, we all know, engenders balance; for every yin there’s a yang, for every high there’s a low and for every Marr there’s a Morrissey. So it was only appropriate that while the Melbourne International Comedy Festival raged in numerous venues across the city, Low should also be performing in town, if only to provide a counterpoint.

Low is married couple Mimi Parker on drums and vocals and Alan Sparhawk on guitar and vocals, plus Steve Garrington on bass guitar and keyboards. They produce immaculate, well-crafted songs that are enlivened by the intertwining harmonies of Parker and Sparhawk.

As far as contemporary rock music goes, Low pretty much put the ‘low’ in ‘low key’ and quite possibly in ‘slow’ as well. They are the maestros of minimalism, the admirals of adagio – their instrumentation is sparse and the tempo of their songs rarely quickens beyond walking pace, or a slow dawdle. Hence their status as the poster kids of the micro-genre ‘slowcore.’ Even to call them understated is to go a bit over the top.

I’ve come to the music of Low relatively recently. They’ve been aound for more than 20 years and have released 11 albums, yet I only became aware of them a few years ago when my friend Ralph lent me, In the Fishtank, the cd they recorded with The Ditrty Three. Then I heard The Invisible Way and bought their latest album, Ones and Sixes, which is truly sublime – one of my favourites from 2015. So when I heard they were playing at the Recital Centre, I booked a couple of tickets. They may not bode as a particularly explosive live act, but their intimate songs and intricate soundscapes are perfectly suited to the Recital Centre. Plus, you get to sit down there. 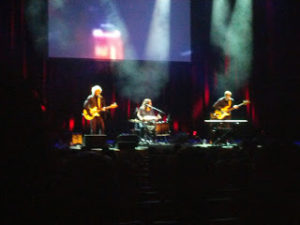 Low on stage in Melbourne – photo by Ralph Somma

I met Ralph in the foyer for a beer before the show. In the long term alcohol is technically a depressant, but in small doses it can act as a stimulant, so we thought a little pick me up before the show might help offset some of the band’s more sombre moments.

As we walked into the auditorium a giant digital clock projected on the wall at the back of the stage was counting back in time from just over nine minutes. Ralph pointed out that this meant we’d be treated to a video extravagazas, but preconditioned as we now are by terrorism and hijack films, there was something foreboding about watching a clock ticking backwards towards zero. I was steeling myself for impact. “All you innocents, make a run for it” as Mimi Parker sings in The Innocents.

On the other hand it was quite handy knowing exactly how long there was to go before the band came on. There might have been time for another beer.

The band took up their positions to general applause just ahead of schedule. This was followed by a moment or two of awkwardness, as there was still 30 seconds left to go on the clock. Do we keep clapping? Should they start early? It was like that fleeting awkward moment in a social situation between introducing yourself to somebody and finding a topic on which you can both converse. Happily the clock struck zero and the house lights dimmed, the projection commenced and Sparhawk scratched out the opening chug of No Comprende.

The sound in the Elisabeth Murdoch Hall was utterly perfect. You could hear each separate instrument quite distinctly. It helped that there were only ever three going at the one time, but the sound still had density and filled the room.

Their stage was sparse, their minimalist principles extending to the setup. Sparhawk had one tiny amp and Parker had a basic drum kit. It wasn’t until they commenced The Innocents and I watched Parker striking her floor tom that I relaised what was weird about the drum kit – she had no bass drum. Nor did she have a hi-hat. Her kit was just a snare, ride and crash cymbals and a floor tom. It sounded great and really, it was all she needed to set up the rhythmic framework for each song. Later in the gig however, when Sparhawk triggered a programmed beat, I thought to myself that they could have achieved that sound by having a bass drum.  Possibly she doesn’t like to use her feet, and given that she is able to tap out the requisite rhythms with subtlety and skill, why should she. I’ve never seen a drummer play with such ease and economy – she could scroll through her Instagram feed while drumming and still not miss a beat.

The projection meanwhile, was showing the twig-by-twig assembly of the bare tree depicted on the album cover artwork for Ones and Sixes, from the Winter Drawings series by Peter Liversidge. 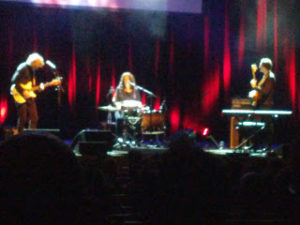 I’ve emphasised the minimalist qualities and slow tempo of Low’s music, but I don’t want to give the impression that they are miserable sad sacks – their songs are not without humour or wry observation. Plastic Cup, the next song they played, is a case in point. It relates the tale of a person who, despite the worldy trappings of success, is finally reduced to pissing into a plastic cup. The song then follows the cup as it is dug up ‘a thousand years from now’ with its finders surmising about its original use, and concluding that it was probably the cup ‘the king held every night as he cried’ Okay, so not outright funny, and really, a bit depressing when you think about it, but perhaps we can at least say it is tragi-comic.

They followed Plastic Cup with On My Own and Holy Ghost, the latter beautifully sung by Mimi Parker, also from The Invisible Way. From there the set branched out to incorporate songs from across their career. Monkey was one of the night’s highlights with its rumbling drums, soaring guitars and dual vocal. They also played Pissing and Will The Night alongside stunning tracks from their latest album such as Spanish Translation and What Part of Me.

Steve Garrington moved between bass and keyboards without fuss and maintained an impassive expression throughout, but his playing was understated and exquisite throughout.

The songs were played with controlled restraint. The vocal trick they employ in a number of songs, whereby Parker sustains her note just a fraction longer than Sparhawk, was quite noticeable in the live setting, but it was very effective and added an extra layer of lament to some their songs.

At one stage Sparhawk broke a string during one of his occasional feedback frenzies and had to disappear backstage to get a replacement. He then proceeded to restring his guitar on stage while Parker and Garrington played Especially Me without his guitar accompaniment. Without necessarily knowing what is involved, it still surprised me that he didn’t have, a) a spare guitar, or b) a guitar tech or roadie to perform such menial tasks.

Thankfully he was ready to go again in time for Lies, before they concluded with the bombastic Landslide, a song that would have been impossible without Sparhawk’s skuzzy and atmospheric guitar work. As the reverberations of that song died away, the band made their exit.

However, after such a transfixing show, we weren’t letting them go that easily. They returned for an encore and played a cover of Al Green’s Let’s Stay Together, sung by Mimi Parker. This was one of those gigs where I’d just rather hear them play their own songs, but I suppose the artists must reserve the right to play whatever they feel like.

Sparhawk revealed that Parker had chastised him backstage for not talking enough to the audience, so he fumbled about for a few seconds before finally asking if there was anything we wanted to hear. I missed the first title that was yelled out, but after the briefest consultation, they rejected it anyway. I’d have yelled out for Into Youhad we been closer the front, but the popular vote seemed to be Sunflower.

They concluded the show with the gentle and sanguine When I Go Deaf from 2005’s The Great Destroyer.  Well it started out gentle and sanguine, but as befitting a song called When I Go Deaf, it erupted into a (controlled) cacophony. Had I gone deaf at that moment, I’d have at least gained some consolation from the fact that the last thing I’d heard was Low playing live.

They may be called Low, but I was on a high after the show, and I’d only had one beer. What a great band!

When I Go Deaf