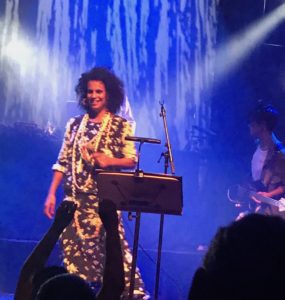 If there’s an upside to the political paralysis and the stymying of anything like progress on many of the issues confronting modern western democracies – climate change, equal rights and representation for women, the right to choose, racism, the free flow of refugees and Sydney’s lock-out laws – then it’s that artists like Neneh Cherry have been prompted back into action. Her new album Broken Politics is so good that I’m almost glad we’re still dealing with these issues so that she has something to sing about.

Neneh was playing the Melbourne Recital Centre the night after Julia Holter, so I was backing up for a second night in succession. Julia’s performance the night before was cerebral, esoteric and slightly aloof. It was somewhat difficult for the audience to feel welcomed in, so it was a great relief when Neneh walked on and gave us a big smile in greeting to the whoops and applause.

The previous night I was struck by the unconventional instrumentation in Julia Holter’s opening number – violin, double bass and bagpipe, but if anything, Neneh opted for an even less conventional combo of harp, halo (a sort of enclosed steel drum), decks, vibraphone and iPhone. The track was Cheap Breakfast Special, a brief interlude from Broken Politics – the vocals courtesy of an iPhone recording that Cherry held up to the microphone. 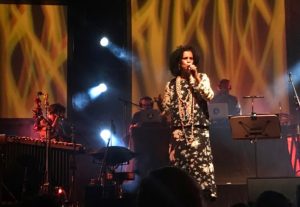 The band then launched into Fallen Leaves the opening track from the new album. The setlist took us through the entirety of the new album with the band members swapping instruments between each song. If Neneh was the star, then band member Rosie, who played up to 15 different instruments on the night, was 2IC. Her casual brilliance while smiling and interacting with people at the front was beautiful to watch. The subtle mix of acoustic and electronic percussion and the interplay of instruments was  a particular highlight.

Neneh Cherry was warm and generous in her audience interaction. She told us that they’d been out to Victoria Market and the Escher exhibition at NGV during the day and urged us to go, forgetting that we lived here and probably knew about these places. She had a brief reminiscence with an audience member about some club in Sheffield. 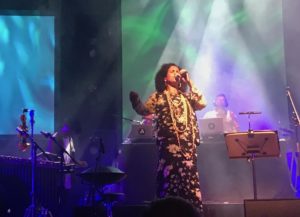 More importantly, her vocals were clear and her voice strong and sassy. The Hall’s famed acoustics suited her music nicely, we could detect every nuance and nano-note, from the subtle, layered percussion of Synchronised Devotion to the funk of Natural Skin Deep.

Cherry commented on how pleasantly quiet we were. The flip side of that is that the the formality of the venue meant that we remained seated. When I saw her perform at Hamer Hall a few years ago, the show  ended with 50 or so audience members dancing joyously on stage. None of that at the Recital Centre. And I’m sure my feet weren’t the only ones twitching with the need to  get up and dance, or at least shuffle.

When Cherry disappeared to change her footwear and came back with trainers, I suspected we were getting to the business end. I am perhaps in the minority in that I prefer the music from her two most recent albums to the songs on her first two – but there  is no denying the foot shifting qualities of Manchild. 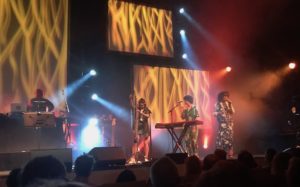 It wasn’t until Cherry left the stage that we finally got to our feet. When she returned we remained standing as she launched into 7 seconds and of course, Buffalo Stance, which despite being given a new treatment, had everyone on their feet and singing along.

In the end it was every bit as joyous as the Hamer Hall gig a few years back and an early contender for gig of the year. 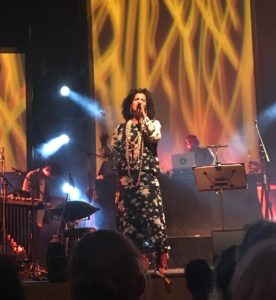