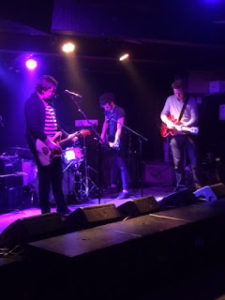 From Moomba to Mardi Gras, and even the military, everyone loves a parade. I’m not sure where Melbourne band Parading fits into this spectrum, but they do have a couple of unique selling points; one is that they are the only band I can think of whose name is a present participle. I can’t even think of very many bands with a verb for a name – Ride, Pulp (depending on context) and possibly Blur are the only others.

I was at the Gasometer Hotel for the first of a four-week Tuesday residency featuring acts from the Lost & Lonesome Record label. Fittingly perhaps, given the label name, I was there by myself. I’d been all set to catch Parading play at The Tote a couple of weeks previous, but as the downpour that had persisted all day continued into the evening, the idea of driving across town grew less and less attractive. I’m at an age where I look for reasons not to go out, rather than the opposite, so I thought I’d just take a rain check – literally – and wait for another opportunity to catch them.

This was another cold night, but at least it wasn’t raining and the drive there and back was a good chance for some alone time with the new Radiohead album that had just come out.

I missed the first act, The Icypoles, but caught Ciggy Witch as they were starting their set. I took up a spot in the shadows at the back where the bulk of the small audience was loosely gathered. Despite there being several metres of empty space between me and the stage, a group of three people wandered in and stationed themselves right in front of me; so close that the brim of my trilby was actually touching the back of one guy’s head. Fine if we were in a packed moshpit at the Hilltop Hoods, but this was a largely empty room for a gentle indie pop band. I don’t know if this was some kind of passive-aggressive protest against me, or just people with no sense of personal space. However, rather than make a scene I just moved off to a stool on the side.

I’d never heard of Ciggy Witch, but it’s an evocative name and I recognised the girl on keyboards as the drummer from Totally Mild. Musically they were very accomplished with interesting multi-layered jangly guitar lines and intertwining melodies. There was even a slide guitarist perched on two upturned milk crates who managed to elicit something more musical than a country whine from his instrument.

The two guitarists who alternated singing duties offset this innate musicality with deliberately naïve lyrics and bland vocal delivery. I don’t offer this as a criticism – these are distinctive characteristics of the ‘dolewave’ genre, a name that presumably derives from the employment status of the genre’s exponents rather than saying anything in particular about a shared fashion sensibility or general musical approach. Even so, expressionless vocal delivery does seem to be a thing with a certain type of band – Twerps, Dick Diver etc.

Of course I don’t know for sure that this was a deliberate stylistic choice for Ciggy Witch. I only assume as much because when the bass player and Ashley Bundang, the keyboard player, contributed backing vocals, they injected a greater degree of tone and tunefulness into their singing. It might simply have been that the guitarists wrote the songs and wanted to sing them, regardless of the fact that there are others in the band more vocally adept. And fair enough too. In any case, musically they sounded pretty good. 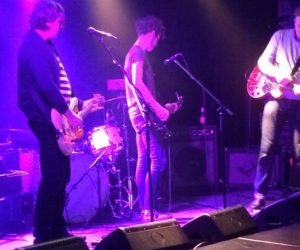 There was only a small crowd of 40 or so people in the room and this diminished even further once Ciggy Witch finished. Normally the venue gets more crowded for the headline act, not less, but perhaps Ciggy Witch are at a stage in their career when their friends are still willing to venture out on a cold night to see them play. In fact the room was so sparsely populated that the barmaid correctly anticipated my order when I went to procure just my second drink.

Still there were enough of us in the room when Parading started strumming away at their opening instrumental piece, a dreamy, meandering drenching of guitar reverb. Lead singer – not that he’d done any of that to this point – Tom Coleman introduced it as Alexandra Pde, which seemed appropriate given that it was also the name of the busy thoroughfare that ran past the front door of the venue.

They followed this with a song called Riverside and then their new single, Butterfly, the only Parading song with which I was familiar going in. It is a dark, thrumming number that resembles Bowie’s Heroes for a few bars, before settling into something less grandiose, but nonetheless compelling. The band was joined on stage for this song and the next by a guest vocalist. Coleman introduced her in a mumbling slur, so I missed the name, but it was possibly Alana West, who sings on the single and fronts label stablemates Hideous Towns. Whoever it was, she took her cue from Coleman and delivered her vocal contribution with a deadpan expression while staring fixedly into the middle distance.

If Ciggy Witch can be classified as ‘dolewave,’ then Parading might be said to represent that other evocatively named indie genre, ‘shoegaze,’ a nomenclature that tells you as much about the band’s posture as it does about their music. And it was true to a degree, the band members generally looked intently downwards over their instruments as they played. Like forbears My Bloody Valentine, and Ride, Parading’s sound is dominated by heavily daubed layers of guitar reverb and a soporific vocal that doesn’t so much ride on top the music as blend in with the soundscape. Either that or the mix was just a bit muffled.

Keith is a name already synonymous with great guitarists – along with other equally treasured aspects of rock ‘n’ roll life – and while I can’t speak to the private habits of Parading’s Keith Mason, his playing style was the highlight of the night.

Once strapped on, Mason wrestles with his guitar as if it is an octopus he is trying to dislodge. He twists and turns as he grasps the arm of his guitar with one hand, and doesn’t so much strum it as swipe furiously at it with the other, his forearm swinging on an axis so well-oiled that he threatens to punch himself in the chin on each upward thrust.

I’m not so conversant with the intricacies of playing that I could necessarily tell what noise was coming from Coleman’s amp and what from Keith’s, but where Coleman seemed to be adding the melody line, Mason was dipping into a palette of feedback and lathering on the noise in ever thicker, more dissonant daubs. It sounded great.

“More Keith” Coleman at one stage asked of the mixer, a cry which was taken up by a few stray members of the audience, and one with which I wholeheartedly concurred. ‘More Keith’ indeed.