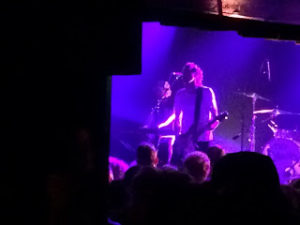 The view from my restricted viewing spot

It was a rookie error. Booking a ticket to see The Drones on a Friday night without first checking the footy fixture. Sure enough, the Hawks were playing Sydney on the same night. So I was in a bind, but with Hawthorn star Jarryd Roughead’s cancer diagnosis during the week, all Hawks fans had to get along to the match to show their support.

Happily, when I checked the 170 Russell website on the morning of the gig I saw that The Drones were due on stage at 10.45pm, which I gauged was probably just enough time for me to get from the MCG to 170 Russell once the match finished. Particularly if we lost, as I then wouldn’t have to wait around to sing the club song at the end. Plus, what were the chances of the gig starting on time? In this I was counting on the customary lack of consideration that bands show their fans as they engage in a rock ‘n’ roll Dyonisian debauch backstage while the punters jostle for position in uncomfortable proximity to each other.

And I was correct on both fronts. The Hawks lost, which was of course disastrous, but at least it allowed me to make a quick exit from the ground. After edging across the singing Barack Bridge with the post-match crowd I reached the venue at around 11pm, and was descending the stairs just in time to hear the feedback squawl of Private Execution starting up.

The gig, in a way, mirrored the football match I’d just seen; not just because Hawks, like drones, are airborne creatures, but because both events were stuttering, stop-start affairs. Like the Hawks, everytime the band seemed to be gaining a bit of momentum, they suddenly halted. In the case of the Hawks, they fiddled about with the ball at half-back or got hemmed in on the flank, whereas The Drones would be letting it rip with a driving beat, only for Gareth to crouch on the ground and fiddle with his pedals to extract a caustic feedback wail from his amp.

Things weren’t helped when only two songs in, they had to restart Taman Shud after Liddiard blew his amp. The early focus of the set understandably centred round newer material from Feelin Kinda Free, all songs that work well on record, but live, their bombastic dynamics emphasised the stilted momentum of the gig.

This was a sold out gig and the venue was packed with only restricted viewing spots available. I could see either the right hand side of the stage or the left hand side, but not both. So basically I had the choice of watching Dan Luscombe on guitar or Fiona Kitschin on bass. Naturally I chose Kitschin, despite the fact that she was playing with her back to the audience. For as handsome and debonair as Luscombe undoubtedly is, Kitschin is cuter. Plus Luscombe was playing with his customary laconic economy, i.e. playing one note out of every 10, while looking out at the crowd with an ‘I could tear this place up like Hendrix, I just choose not to’ expression.

The dense crowd also hampered my attempts to join friends Ralph and Nina who were on the far side of the venue. Eventually I edged around the back and found them, but they were also standing in a restricted viewing spot. However, if I half crouched and angled myself awkwardly to the right, I had a reasonable view of most of the band. In retrospect, I suspect that it was this awkward posture I was forced to adopt that affected my appreciation of the show.

In truth it was a pretty good gig, if not necessarily exhilarating. The new material, good as it is, might take a bit of time to flesh out in the live context. But the contributions of the trio of guest vocalists who joined the band on stage for Then They Came For Me, To Think That I Once Loved You and Shut Down SETI added an extra layer to the sound, even if it meant that it was nearly as crowded on stage as in the mosh pit. And these tracks, particularly Shut Down SETI have unusual time signatures and non-linear structures. They wouldn’t be any easier to play than they are to listen to.

Liddiard approached his task with his typical gusto, stretching his neck and spitting his invective upwards into the mike. And it was piercingly loud at times. But the crowd lapped it up, particularly when they launched into older numbers I See Seaweed, Six Ways to Sunday and I Don’t Ever Want To Change to close the set.

When they returned for the encore, Liddiard announced that they would do a song they hadn’t played for a few years. He then dug out the ominous opening notes of I Am the Supercargo and launched into the impassioned cautionary tale about the Papuans contact with white man. Most Drones songs sound like unsettling cautionary tales about something or other, but that might just be Liddiard’s acerbic and sardonic delivery mixed with their screeching, acrid guitars and dissonant beats.

They concluded the set with standard closer, Kev Carmody’s River of Tears. Equal parts chaotic and cathartic, the gig was also perhaps a little inconsistent. Of the three of us, Nina was the most impressed with the show. Whether this is indicative of the fact that she knows them more intimately and is therefore in the best position to judge, or because in her eyes they can do no wrong, I couldn’t say. My own view was somewhat tainted by the dispiriting result of the Hawthorn game and the equally dispiriting sight of the last tram to Airport West trundling off in the distance as I arrived at the tram stop.