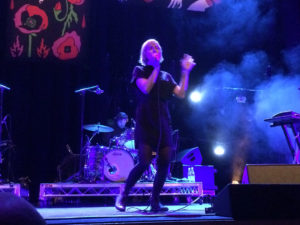 Heiracrchies exist in all aspects of life, workplaces, schools, institutions, families and society in general. No matter which pursuit you are enaged in, be it curing cancer or waging radical jihad; no matter how benign the organisation, be it a global think tank or a local scout group, there will be a ranking of positions in which one personage, usually someone uniquely undeserving, will assume the privileged position.

In the world of gigs, the privileged person is the one with the backstage pass who is “with the band,” but among the regular punters, it is those with front row tickets. I go to a lot of concerts and I’ve only rarely had front row seats. I once got front row seats to see Elvis Costello at Rod Laver Arena – it was in the pre-internet period (P.I.) when being first in the queue at the Box Office was basically all that was required. The shine of my achievement however was somewhat dulled by the fact that come concert time the venue was only half full – the upper section was in fact curtained off. So by the time a bearded Elvis launched into The Other Side of Summer, basically everyone there was in the front row.

Nowadays the front few rows of seats don’t seem to be available to the general ticket-buying concert goer. This wouldn’t be so bad if those occupying the prime seats were performing some other useful function, like selling t-shitrts in the foyer or getting down on all fours after the gig so the artist could snort coke from their arse crack. But sadly, the people occupying the front row are usually just friends of the promoters or people who work at radio stations.

With this in mind, you can understand my excitement when I checked the seating plan for Poliça’s show at the Melbourne Recital Centre and saw that I had pretty much open slather. This was perhaps karma for all the concerts I’ve sat through with an unsatisfactory view. Of course it was more likely due to Poliça’s comparative obscurity and the Melbourne Recital Centre’s somewhat secretive approach to marketing. Well not secretive, but they tend to advertise in the arts pages of mainstream media, which is not necessarily where fans of progressive neo-electronica or post-rock are looking. 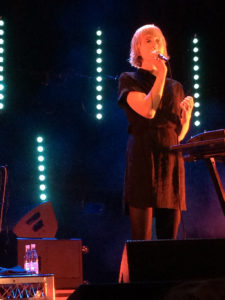 I chose second row centre; not so close that my view would be obscured by a monitor, or that people would suspect me of trying to upskirt Channy Leanagh with my camera phone, but close enough to at least get a photo in focus and even perhaps score a setlist at the end of the show. Of course in reality, any seat at the Recital Centre offers a great view, and even more importantly, great acoustics.

That said the Recital Centre seemed like an unusually large and somewhat posh venue for a band of their relative anonymity to be playing. No one that I knew had even heard of the band, let alone considered accompanying me. Hence I was there by myself, as indeed I noted, were a number of other people. Poliça’s chief demographic, it appeared, is loners.

As it turned out, the room was just over two-thirds full with most of the upper section empty, and that was after a price cut for tickets a couple of weeks out from the show. The Corner Hotel or Northcote Social Club would have seemed more likely venues, but I wasn’t complaining; I was front, centre and in a comfy seat rather than jostling for position.

I first heard Channy Leanagh in her guest vocal spot on Leftfield’s Alternative Light Source album. Her contribution Bilocation is among the album’s highlights. So I Googled and Spotified and discovered her band Poliça. The music is electronica, but not techno and it has a quiet, subversive element: album artwork depicting bloodied wounds, nudity and lewdly suggestive lyrics with the occasional F-bomb thrown in. Not that I can make out much of what is being sung; Channy Leanagh has a distinctive voice and a natural inflection that sounds like she’s singing through a vocoder or an out of sync auto-tune. Perhaps she is. In any case, the resulting vocals are largely indecipherable.

It was winter’s eve and Melbourne’s weather had turned suitably chilly, so after taking the stage, it was appropriate that the band opened with Summer Please, the opening track from their latest album, United Crushers. Those of us who had battled the Antarctic blast that seems to permananetly gust up Sturt Street certainly understood where they were coming from. 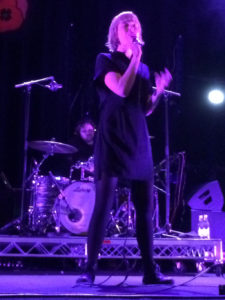 It was an intriguing line-up with dual drummers, Ben Ivascu and Drew Christopherson, Chris Bierdon on bass and Channy Leanagh on vocals, keyboards, samples and other computer generated bleeps and bops. The band played against a backdrop of the album artwork that depicted poppies and cartoonish renderings of dismembered fingers and hands. I didn’t understand its significance or its relationship to the material, but then I don’t even know how to pronounce the name of the band (is the ‘c’ a ‘see’ sound or a hard ‘k’ sound, and what’s with the curly pig’s tail beneath it?), so I wasn’t about to start critiquing the artwork.

The two drummers made their presence felt early in the set on songs such as Lime Habit, Someway and Wedding. They alternated between playing syncopated beats and competing rhythmic patterns. But they were reasonably restrained for drummers and never overpowered the rest of the band.

Despite the throbbing, pulsing electronica and the dueling drums that would have had a pub crowd bopping and dancing, we in the stalls remained steadfastly in our seats like the polite Melburbnians that we are. There’s something about the vibe in the Recital Centre that just isn’t conducive to losing one’s inhibitions in freeform movement, liturgical or otherwise. Plus, I suspect, we were all too self-conscious to be the first to stand up. Leanagh did at least indulge in some interpretive dancing on our behalf; stepping out from her keyboard to give her elfin frame an occasional shake.

The sound was finely balanced and the acoustics crisp and clear, but even with the presence of two drummers, the band’s performance was more hypnotic than explosive. That isn’t a criticism – it’s a mark of Leanagh’s voice and testament to the eveness of their playing. Of course there might also have been an element of weariness involved; Leanagh mentioned that it was 4am by their (Minnesota) time. 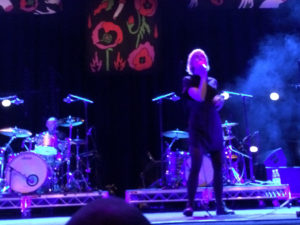 The bulk of the set was drawn from United Crushers, which they played more or less in the same order as the album. Fish, Berlin and Kind were all highlights. They interrupted the sequence with occasional songs from previous albums: Lay Your Cards Out and Wandering Star from their first album, Give You the Ghost, and Tiff and Warrior Lord from Shulamith.

The show ended with album closer, Lose You. Coaxed back for an encore, Leanagh aplogised for her voice, which she said ‘sucked’, a comment that elicited a long groan of sympathetic rebuttal from the audience. Thus invited, they embarked on a two song encore of Baby Sucks and Amongster.

As I made my way out of the auditorium I did manage to snaffle a setlist, not from the stage, but from the sound desk up the back. This wasn’t the most dynamic concert I’ve ever witnessed, but it was solid performance and it was good being right up the front. As Thom York sings in Karma Police, ‘For a minute there, I lost myself…’ 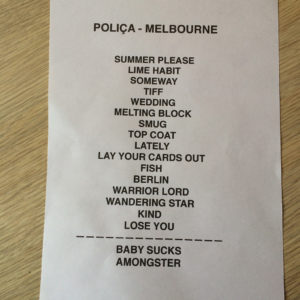