I don’t know if Chrissie Hynde and the Pretenders are insecure or just feel safety in numbers, but lately whenever they tour Australia, they do so in tandem with another act. In 2010 it was Blondie and this time around it’s Stevie Nicks.

The Blondie pairing made sense to me, but Stevie Nicks seems a slightly odd coupling. The Pretenders emerged as part of the punk/new wave movement, which was a reaction to the pervasive laid back sound of American west coast bands like Nicks’ Fleetwood Mac. Either the distinctions between the various 1970s music genres have been forgotten, or any survivors from that era have all been lumped into the same nostalgia basket. More likely, the promoter saw the opportunity to fill bigger arenas with two distinct sets of fans. In that case, watch out for the forthcoming joint tour by the Doobie Brothers and Twisted Sister.

I’ve seen The Pretenders only once before in 1983 and even then they played with Talking Heads as part of the Stop Making Sense tour. So the announcement of a headlining club show at the Forum seemed like a bit of a rarity. I went with my friend John, who hadn’t seen them in nearly as long, but we doubted that the set list on this occasion would differ too wildly from when we last saw them. Which was fine with us, and to be honest, we’d have been happy enough with a run through of their classic first album.

The person scanning tickets at the door warned us against taking photographs of the band, as did the bag check person, and just to make sure we got the point, there were also signs on the walls, the doors and even above the urinal in the toilets. Plus there were periodic announcements. It was almost as annoying as someone blocking your view with an iPhone X for the duration of a gig. Sure they were ‘respectfully’ asking us to refrain from taking photographs, but they also ‘respectfully’ charged us $100 for a club gig, so while I obliged with their request, I also understood if others chose not to.

The venue wasn’t very crowded – certainly not with photographers – so much so that the standing section at the back was curtained off. This was a little surprising, although there were a number of mitigating circumstances. Not least the ticket price, but also, the number of competing music events in Melbourne.

Paul Kelly was playing with Steve Earle in the Botanical Gardens, Live were playing at the Music Bowl, Ron S Peno & the Superstitions were playing the Spotted Mallard, The Aints at the Caravan Club, and Clouds and Falling Joys were on at the Croxton Park Hotel. That covers a good percentage of music fans over 40 years of age. And younger, groovier people had the choice of Drake at Rod Laver Arena, Bec Sandridge at Howler or one of the many events on opening night of Melbourne Music Week.

Not only that, but the Pretenders played with Stevie Nicks at Rod Laver Arena the previous night and had a winery show coming up the following day, so the pool of fans who hadn’t already seen them, were set to do so the next night, or were already attending another event was considerably reduced by the time this gig was announced.

And that doesn’t even factor in that most Pretenders fans are of the demographic that would prefer to stay home on a Friday night and watch Midsomer Murders on the ABC or Better Homes and Gardens on 7. It was a wonder there was anyone there at all really. 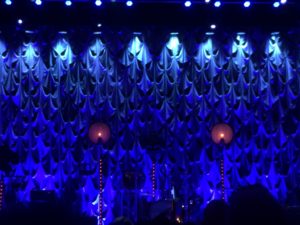 When the band emerged, Chrissie Hynde was looking resplendent in double denim with a Pretenders tour t-shirt. Her once brunette bob was a spiked platinum grey – not unlike Stevie Nicks’ 70s haircut actually.

The only other original band member on stage was Martin Chambers on drums. The Pretenders suffered their share of tragedy in the early 80s when both guitarist James Honeyman Scott and bassist Pete Farndon died from drug related incidents. Not to mention that Hynde was once left at the altar by Sid Vicious, who also died of a heroin overdose. As John pointed out, the other band members exhibited a certain degree of courage just getting on a stage with her.

The band she has assembled are excellent musicians – in truth, probably far better than the original lineup. They opened with Alone and Gotta Wait from the most recent album before they played the first of their heritage hits, Message of Love and Talk of the Town. Despite the various lineup changes, The Pretenders have maintained three of the most important elements of their sound: Hynde’s rich, resonant voice, her attitude and Martin Chambers’ sideburns.

It is Hynde, however, who we’ve come to hear and she was in fine voice. The newer songs that dotted the set were performed with great energy; Down the Wrong Way and Let’s Get Lost, but not surprisingly it was the band’s incredible catalogue of early 80s hits that generated the most enthusiasm.

Their Singles album from 1986 is as good as any other band’s greatest hits collection and because Hynde’s voice is still as dynamic as ever, the band remain more than just a heritage act. As Kid gave way to Hymn for Her, Back on the Chain Gang and Stop Your Sobbing, the energy levels in the room lifted exponentially. 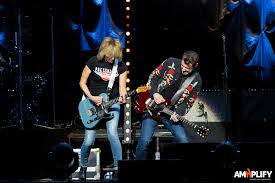 A request from an audience member for Forever Young was honoured, and Hynde joked about spotting the difference in songwriting as she moved from the Dylan classic to her own more recent, I Hate Myself. She may not be Dylan’s equal as a songwriter, but then no one else is either, yet she sure as hell sang Forever Young better than Bob might hope to.

Don’t Get Me Wrong chugged along nicely and the rockabilly of Thumbelina had the mosh pit bopping. Even Chambers’ drum solo, replete with novelty rainbow hat, didn’t slow the momentum, despite showing himself singularly inept at catching the drum sticks he tossed in the air.

By the time they closed the show with Middle of the Road the audience was whooping, singing loudly and dancing rapturously. We may not have filled the room with our numbers, but we more than made up for it with adoration and noise.

As the song wound down the girl in front of me dared to pull out her phone and take a snap, provoking the woman behind me to push through and a tap her on the shoulder to remind her of the ‘no-photo’ edict. Gallant as ever, I stood back to let them fight it out, but seriously, why would you care whether someone else wanted to take a photo at the end of the gig. 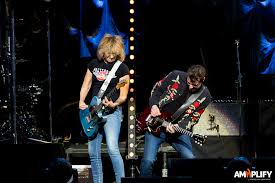 The encore delivered a few of the classic songs form the first album, including Precious, which has always been my favourite Pretenders song. Plus of course Brass in Pocket, both of which Hynde sung with all the sass of the originals. And as she sings in the latter, “I got new skank, it’s so reet.” I’ve got no idea what that means, but whatever it is, she’s still got it.