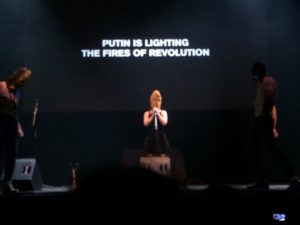 Just think of some of rock music’s more famous acts of protest: John Lennon having a lie-in in a Hilton Hotel bed with Yoko Ono, Prince tattooing the word ‘SLAVE’ across his cheek to register his outrage at having to make music to meet the terms of a multi-million dollar contract, Midnight Oil wearing ‘SORRY’ t-shirts when they performed in front of a global audience of millions at the closing ceremony of Sydney’s Olympic Games, Kanye West storming the stage at the Grammy Awards to complain that his friend didn’t win a trophy, and Taylor Swift removing her music from Spotify so that her young fans – or more likely their middle-class parents – were forced to purchase a separate copy of the album in addition to their Spotify subscription.

What bravery. Talk about standing up for the rights of the little people. Compare these acts of self-indulgence with that of Maria Alyokhina from Pussy Riot who stormed the altar of Moscow’s Cathedral of Christ the Saviour, plugged in a guitar and sang a song, or half a song, to protest Putin’s virtual dictatorship of Russia and the complicity of the Russian Orthodox Church.

Unlike those listed above, whose acts of protest were at best publicity stunts void of consequence or any real ramification, Maria Alyokhina was arrested for ‘hooliganism motivated by religious hatred’ and sentenced to two years prison in a Russian labour camp in The Urals.

Most rock stars who have spent time behind bars have done so because of glamorous crimes such as drug possession, or actual crimes like assault, sex offences or in the case of Tracey Pew from The Birthday Party, stealing a sewing machine. But none that I’m aware of have languished in prison for playing their music.

If playing music can be a crime, it does rather beg the question of how Phil Collins and Elton John have evaded justice for so long.

While most rock and roll rebellion consists of nothing much more than posturing, heroin, haircuts and leather pants, or all four in Sid Vicious’ case, in Maria Alyokhina, we salute an actual rock and roll outlaw who was jailed for a song and a performance that lasted barely a minute.

Perhaps fittingly, rock and roll activism has tended to be demonstrated in song more so than deed. Think Dylan’s Masters of War, Crosby, Stills, Nash and Young’s Ohio, Edwin Starr’s War (What is it Good For?), The Sex Pistols’ God Save the Queen, U2’s Sunday Bloody Sunday, NWA’s Fuck The Police, The Specials’ Free Nelson Mandela, Yothu Yindi’s Treaty and A.B. Original’s January 26, to name just a few of the more obvious examples.

There are also less obvious examples, De Do Do Do De Da Da Da, Da Doo Ron Ron, Ob-La-Di Ob-La-Da and Do Wah Diddy Diddy, all of which would seem to be some sort of protest against the English language. So not understanding Russian should be no barrier to appreciating Pussy Riot.

What makes the example of Pussy Riot so noteworthy is that they are arguably the world’s most infamous political rock act, yet few people could name or even recognise any of their songs. Of which there are only a few to begin with, most of which aren’t even recorded, let alone commercially available, and to the trained ear, and from a purely musical perspective, aren’t even that good.

Despite this, when the Supersense line-up was announced, Pussy Riot was for me the main drawcard; partly out of curiosity, partly from solidarity and partly because a group of dissident Russian chicks wearing homemade balaclavas is the punk equivalent of Rhianna in fishnets. 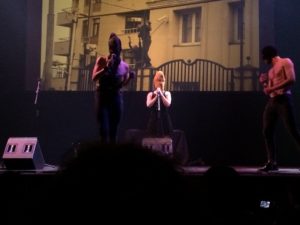 I didn’t know quite what to expect. I wasn’t sure if it was a theatrical piece or a concert as such. The performance was part of a tour to promote Maria Alyokhina’s book Riot Days, which was published that very day, but I had no idea what form the show would take.

The sign at the entry to the Playhouse warned us about the dangers within: strong strobe effects, nudity and (gasp) cigarettes! There was a time when the singer and most of the audience chain-smoked throughout gigs – now we were being warned in advance that we may be exposed to one.

We did see a cigarette at one stage, and those of us near the front were splashed with water, but the only nudity was a guy with a bare torso, unless Maria Alyokhina without her balaclava counts.

The show consisted of four people on stage telling the story of Pussy Riot and the arrest and imprisonment of Maria Alyokhina. It sounds straightforward, but it was done in a raw, visceral and utterly compelling way, and counts as one of the most memorable pieces of theatre I’ve ever experienced.

On stage was a male musician who moved between his loop machine, laptop and a standing snare creating a relentless and stark industrial soundscape. There was also a female actor and musician who played baritone sax and joined in the narrative from time to time. Far right was a male dancer and actor who played a series of roles from Pussy Riot collaborator, guard, policeman, priest, prisoner and judge. He did so without any changes of costume, accent or acting style, not unlike John Clarke’s satirical political interviews, just more threatening. Like John Clarke, he was all the more effective for the absence of any artifice.

Also on stage was Maria Alyokhina who appeared wearing the trademark balaclava that she removed and threw into the audience. A little tighter stitch and it might have reached Angela and I in the fifth row, for it flopped down in the lap of the guy in the row in front of us.

As Maria Alyokhina and the main actor berated each other and us in Russian, a video screen behind the actors showed footage of the events they were portraying with explanatory English surtitles running across the top. The surtitles flashed by quite quickly and it was difficult to keep up, but rather than hinder our understanding, it somehow added to the narrative.

The action was both raw and stylised. The main actor had a strong and intimidating physical presence as he danced about the stage in sharp frenetic bursts. At one point he uncapped a series of water bottles and emptied them across the people in the front rows. We may not have caught the balaclava, but we catch some of the water.

His physicality and shouting were in stark contrast to Alyokhina’s comparative stillness and smaller stature, emphasising the difference in the power dynamic of the characters they inhabited.

The other woman on stage also had an intimidating presence; it’s amazing what a crew cut and an army fatigue top can do. Plus she played an intimidatingly large sax and sang in an extraordinarily powerful operatic voice. At one point as she was emitting weird poltergeist screeches you could see her eyes rolling back in her head. I actually began to grow concerned for her. 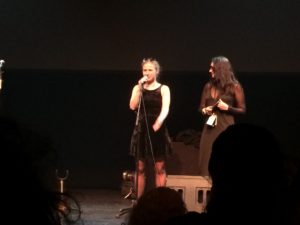 They didn’t play Punk Prayer: Mother of God Drive Putin Away or Death to Prison, Freedom to Protests, two of the songs that gained them notoriety through their pop-up protests, but they quoted from them as they told the story. Just as they quoted from court documents, testimony and Putin’s commentary on Pussy Riot.

This was a powerful and affecting performance. It wasn’t a play and nor was it a concert. It was an art form all its own – part polemic, part protest, part auto-biography and part book promotion. When you put it like that it doesn’t sound promising, but it was done so brilliantly with such acute theatrical sensibility, that it was completely engaging. And in a week when in Australia our biggest political concern was whether some parliamentarians had dual citizenship due to their ancestry, Maria Alyokhina’s story was even more inspiring. 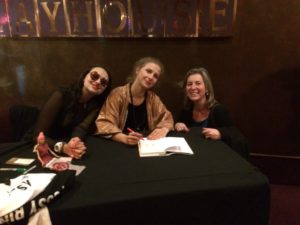 The cast received a well-deserved standing ovation at its conclusion, we got speeches from the director, the book’s translator, and of course Alyokhina. The connection with the audience was quite palpable – to the point that almost everyone in the theatre joined the queue after the show to buy a t-shirt or get a copy of the book signed. I should point out that proceeds from the book and t-shirts were going towards political prisoners and their families.

As far as I could tell, Alyokhina was the only original member of Pussy Riot on stage, but as the t-shirt at the merch stall said, ‘Everyone Can Be Pussy Riot.’ Just as Billy Bragg once sang, ‘The revolution is just a t-shirt away.’ 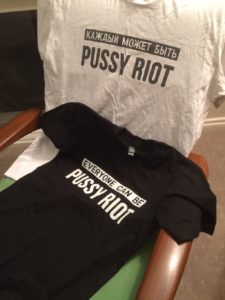 “The revolution is just a t-shirt away” 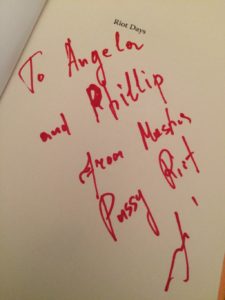