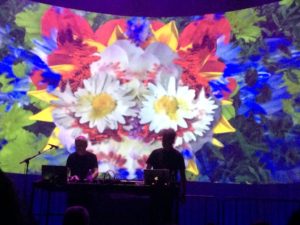 Supersense was billed as a Festival of the Ecstatic – three days of experimental music, dance and theatre that explores ecstatic states of being. In other words, lots of weird shit – everything from noise merchants (Nazoranai, Stephen O’Malley), psychedelic cosmonauts (Sprititualized), anti-Putin punk dissidents (Pussy Riot), sensual experimental pop star (Kimbra) and loads of other esoteric, avante-garde instrumentalists, musical mavericks and blokes who know how to twiddle knobs and upload stuff on Apple Macs.

A complicated ticketing system and overlapping schedule meant that you couldn’t really see everything, even with an All-Festival pass, so we had to do some picking and choosing.

Angela bought the All-Festival pass and I had a Saturday pass so that I could see Pussy Riot and Blonde Redhead. I was super excited about seeing Pussy Riot and I’ve always liked Blonde Redhead’s slightly twisted take on music. So imagine my disappointment when a week out from the show Blonde Redhead disappeared from the program. They cancelled due to ‘unforseen circumstances’ which is the touring equivalent of a band splitting for ‘musical differences’. Interestingly their Facebook page boasted excitedly about extra dates in Mexico just a week after, so some things they can at least forsee.

Their replacement was Sydney electronic maestros Severed Heads. I was reasonably happy with this as they were one of my favourite experimental electronica bands from the early 1980s, particularly their second album Clean.

Severed Heads early stuff was a series of random bleeps and bips over a disjointed, industrial racket that enthralled me when I was a teenager. It was the seeming lack of any sort of compositional pattern that appealed to me, until they ‘sold out’ by putting a dance beat to it and making it all largely enjoyable – although ‘sold out’ implies selling and I’m not sure they shifted many units as the parlance at the time had it. In adding the rapid bpm, however, they became one of the earliest exponents of what several years later would become known as techno music. Their 1986 album The Big Bigot is still a classic of the genre.

I probably haven’t seen them on stage since the early 1980s and it’s fair to say I haven’t kept up, but I was reasonably happy to have this opportunity to see them again. 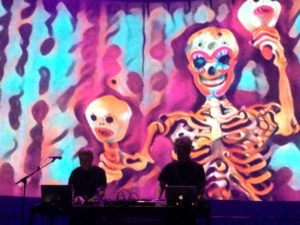 The entry to Supersense was via the underground passage from the State Theatre forecourt. No plush carpet stairs and brass banisters, for the full sensory overload we were shepherded down dank subterranean passages and through narrow doorways throughout which a soundtrack of bubbling jelly slowly percolated.

Eventually we emerged into what I discovered was the stage itself of the State Theatre. The curtain was drawn so we couldn’t see the concert hall itself, but we were effectively backstage where a large bar area was set up as well as a smaller stage on which some of the weekend’s acts would play.

Angela hadn’t accompanied me to Severed Heads – she had heard them before and was in no way inclined to do so again – but we had planned to catch up later at a dance piece. 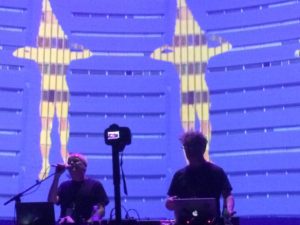 Two oldish looking chaps on stage who looked a bit like sound technicians or roadies had familiar looking faces, and in the case of Stephen Jones, a familiar fuzz to his hair. Indeed the two blokes turned out to be the Severed Heads duo. They stood behind a desk on which sat Apple Macs, loop machines and tiny keyboards.

The set consisted of what might now be called bangerz, but which Tom Ellard introduced as ‘getting a bit bumpy’, mixed with some of the more esoteric, atmospheric pieces. I won’t pretend to know which songs they played, but I thought I recognised a few of the pieces, such as Harold and Cindy Hospital, Petrol and Dead Eyes Opened.

Behind the was a massive screen on which a series of ever-changing moving images were projected. From bright colourful, computer generated flowers, howard Arkley-esque skeletal dancers, morphing geometric patterns, a throbbing cat face and during Petrol a race game simulation. 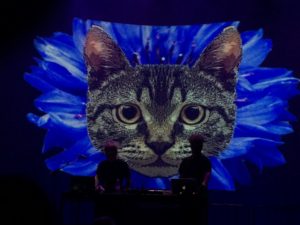 It was as promised, a sonically and visually stunning show. They didn’t take themselves too seriously, as can be the case with sound artists – at various times playing with a stuffed rat, indulging in snippets of banter and taking photos of the audience.

Ellard’s vocals were rudimentary in that stiff Germanic mode beloved of 80s electronic acts. While it wasn’t particularly surprising, you’d think with all those gadgets and pedals on their table they might think of investing in a vocoder. Still, a small quibble. It was good to hear them again and even if electronic music has caught up with them a bit, Severed Heads have kept evolving and have at least got themselves some good graphics – because let’s face it, two blokes standing at a table working on computers isn’t all that exciting to watch. I can do that in my office every Monday to Friday.

The audience made its way through subterranean corridors and splintered off to different venues. I met up with Angela at the Playhouse where Waagenga Blanco was performing a movement piece to the accompaniment of Laurence Pike’s drumming.

A spotlight picked out the drum kit at which Pike busied himself with a rhythmic composition – i.e. a drum solo, while another spot followed Blanco as he gave physical expression to the percussion. His performance was mesmerising and visceral, his movement in turn fluid, jerking, and tribal.

Oliver Coates is an English cellist and he was playing in a room called the State Theatre Rehearsal Space. He performed a stunning minimalist set on cello that was both meditative and manic. He used loops and effects sparingly to add to the aural soundscape, as well as picking, plucking and sawing away at his instrument. He played a piece by Mica Levi called Peace, written for her mother, which began as a low, sustained drone and slowly opened out into a new motif. He also played a beautiful piece in five parts about the winds in Alaska that he noted was a world premiere. One of the highlights of the festival. 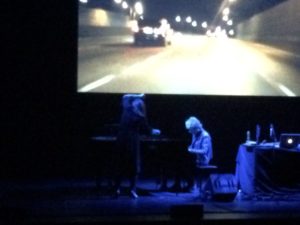 JG Thirlwell is originally from Melbourne and has performed with numerous post-punk and indie acts under a variety of aliases, most famously Nick Cave & the Bad Seeds, The The, Lydia Lunch, Nine Inch Nails, Swans and Marc Almond – a list that probably gives you an idea of the sort of sonic territory he traverses.

I can’t claim to know all that much about him and I’m not sure whether I ever saw him play with various Melbourne bands, but as he seems to have a different name every time he records or plays, it’s quite possible I’ve seen him play dozens of times. I have a couple of the records he put out under the guise of Foetus sometime in the mid 80s, but that’s about where my familiarity with his oeuvre begins and ends.

The crowd filling the foyer of the Playhouse ahead of his performance betrayed a sense of expectation for this homecoming show. He was performing a composition called Cholera Nocebo and The Playhouse stalls filled up quickly when the doors opened.

Angela and I took seats half way back and eventually he strode onto the stage and took up his position behind a desk on which sat a laptop, a loop machine and a few percussive instruments, plus a bell. A grand piano was positioned next to the desk.

As the music started video footage behind screened a time lapse video of a taxi ride through New York City. I don’t know if it was the sped up footage or the second mid-afternoon Kirin I was drinking, but watching the video was making me feel quite woozy, car sick even. Perhaps that was the point.

The problem was that there wasn’t anything else to look at. Thirlwell stood behind his desk looking down at his laptop, pressing the odd button and twiddling with a knob here and there, possibly he had a mini keyboard that triggered sounds, but it didn’t make for an immersive audience experience. Like Severed Heads earlier that day, I’m still not convinced these middle-aged guys with their laptops aren’t just catching up on their emails or reading online news.

The music itself was quite involving and featured a range of shifting sounds, discordant noises, piercing high frequency buzzing, electronic bleats, clunks and a ghostly drone. At first disjointed, it gradually built into a cohesive whole that I found reasonably engaging.

I was in the minority however, for once it became obvious that the footage wasn’t going to vary, much less the music, a slow audience exodus began. Angela lasted only a few minutes before she disappeared to catch some guy who she later explained played a saxophone though a vacuum cleaner – something like that anyway – but her departure was the first trickle of what became a steady flow of people to the exits.

Thirlwell wouldn’t necessarily have known (or cared), for he didn’t look up even once.

At one point a second person joined him on stage and bent over the piano to tug at the strings within. Thirlwell joined her and they gave the impression of surgeons in an operating theatre as they sewed and cauterised some internal injury the piano was suffering. Although Thirlwell did sit down at the piano and coax out few notes, before the woman left the stage and Thirlwell returned to his laptop.

Meanwhile people continued to drift out of the Playhouse auditorium. It was reasonably crowded when he began but by the time the music built to its relatively dramatic denouement, I was the only person left in my row of seats. And by the time Thrilwell’s taxi reached its destination and he emerged from behind his table to take a bow, there weren’t that many of us left applauding. Unsurprisingly there were no introductions or thank-you’s. We duly filed out to various other acts. 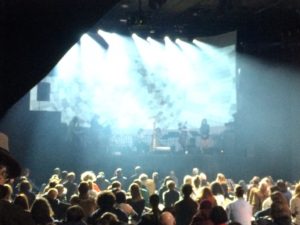 Spaced out at Dream Machine

Angela and I caught some of the Dream Machine by Dave Harrington Group with the Master Musicians of Jajouka, with Zeena Parkins and Sophia Brous, which is right up there with And You Will know Us By The Trail of Dead or People With Chairs Up Their Noses for ridiculously long band names. The performance was a recreation of some trippy psychedelic jam supposedly conceived by William Burroughs and others in the 1960s. It was billed as ‘the world’s first work of art you look at with your eyes closed’ which presumably was the sort of thing they thought sounded cool back then. According to the blurb the piece ‘brings about an hallucinatory experience through the use of immersive flicker light.’ Audience members were encouraged to sit on the floor, close their eyes and allow themselves to transported by the light and music.

As the band name suggests, there were quite a few people on stage and the floor was crowded with people sitting cross-legged on cushions, including Angela. There wasn’t room for me so I just stood to the side. Perhaps my experience of the music was tarred by the fact that I wasn’t experiencing it as intended, but to me it sounded like a long-winded, and not particularly interesting psychedelic wig-out accompanied by a bit of strobe lighting. Angela wandered out half way through and said that she hadn’t been transported, so when the the vocalist intoned ‘Let’s not hear that noise again’ we took her at her word and wandered out to get dinner ahead of seeing Pussy Riot later that night.