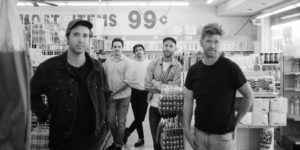 Even before Rolling Blackouts Coastal Fever hit the stage for the first of two sold out shows at the Corner Hotel, the crowd in the mosh pit were singing along loudly and dancing exuberantly to the Yacht Rock mix being piped in from the mixing desk. We heard Dreams (Fleetwood Mac), Africa (Toto), Easy Lover (Phillip Bailey & Phil Collins), Everybody Wants to Rule the World (Tears For Fears) and Listen to the Music (Doobie Brothers) among others.

I thought it was a bit weird that young peeps who weren’t born when these songs were hits not only knew the words, but actually seemed to be enjoying the songs. It was Saturday night after all and I suppose they weren’t still sick of them from the first time around like I was. Had any of them given me a thought, it was probably to wonder what this old bastard was doing in the mosh pit for groovy young ‘it’ band, Rolling Blackouts C.F. So I guess we were equally guilty of trespassing in each other’s eras.

Tuning out of the music I listened into the conversation behind me. I didn’t have much choice mind, because the crowd had grown more congested, so the conversation was taking place right next to my ear lobe. A man with a thick Scottish accent was opining that as good as the Rolling Blackouts C.F. album was, he preferred the E.P.’s. I just love that here we have a band promoting their debut album and there is someone in the audience who prefers their ‘early stuff.’ 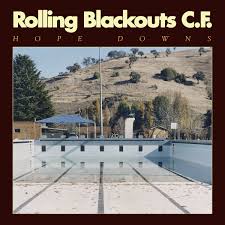 It continued to grow congested up the front as a forest of tall dudes invited their even taller friends into the crush. So just as The Style Council’s Shout to the Top blasted out, I shouted my “excuse me’s” and moved to the back.

I stood on the raised platform in the back corner, and although I could see, from my vantage the stage was split into two by the famous Corner pylon. It also meant I couldn’t get any decent photos. But that didn’t really matter – the sound was good and the band were completely engaging from the beginning, opening with The Hammer, the rollicking closer to their album.

When I first heard them, I couldn’t help but notice the similarities to The Go Betweens; the shared vocals, the harmonies, the hooks, the recognisable Australian lyrical references and the melodic imperative of each song. The main difference is the extra guitarist – there are three – and they are probably more accomplished players than Forster and McLennan, so the sound has more oomph and depth than The Go Betweens’. And live this is even more pronounced. If you’re not playing air guitar three songs in, you’re not listening. 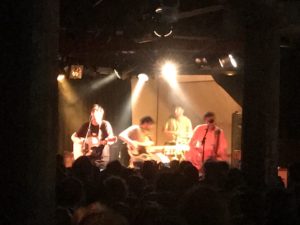 It was full steam ahead from the outset. They played every song at a rapid clip with the three vocalists – Tom Russo, Fran Kearney and Joe White – each taking turns to belt out a tune. Drummer Marcel Tussie sat high and upright behind his kit and set a mean tempo while bassist Joe Russo hid under a cap and stalked back and forth in his little patch as he thrummed away with his with his back to the audience.

The setlist took in most of the album as well as the French Press E.P. with a couple of tracks from their first E.P. Talk Tight. Our Scottish friend may prefer the early stuff, but the songs from Hope Downs impressed me the most with their sheer earwormy sing-a-longingness.

Every track has a hook you can’t ignore, and while the lyrics aren’t quite as poetic as Forster and McLennan’s, they are evocative in their own way and each song has at least one line you can’t help but shout out, from “You’re not talking straight” – “When your heart aches and your morning breaks,” “My Bellarine, it’s where I shoot my scene,” and “Back on the mainland..” 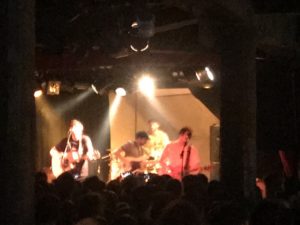 The energy of the band transferred to the audience who were about as lively and into it as you can get. Noticeably absent was the chatter that mars so many gigs, partly because the band didn’t leave much gap between songs before belting out the next one, and partly because people were generally just enjoying the show.

During the final song, French Press, Fran Kearney replaced Tussie on drums so that the percussionist could get in a spot of crowd surfing.  While in the encore there was a stage invasion of sorts as several women who may have been from the support band or may even have just leapt up from the mosh pit, joined in the chorus for the closer Wide Eyes.

Rolling Blackouts Coastal Fever are quite simply the best Australian band I’ve seen all year. They’re good on record, but so much better live. I wouldn’t be at all surprised if in 30 years there is a crowd of people not yet born who are singing along to Mainland or French Press at some venue while they wait for the band du jour to hit the stage?