The Church play The Blood of a Poet

Deep Without a Meaning

The Church have just released their 25th album, Further, Deeper, which, amazingly, lives up to its title by delving further and deeper into the sub-strata of the band’s lush and mesmerising sound. Meanwhile, lead singer Steve Kilbey has just published a memoir titled Something Quite Peculiar that delves just as far and nearly as deep into the sub-strata of his own murky inner life.

Significant as these two works are, the performance I attended this week as part of Melbourne Music Week related to neither of these projects. Instead, The Church were setting up their effects pedals under the big screen at ACMI (Australian Centre of the Moving Image) to perform their soundtrack to Jean Cocteau’s 1932 surrealist film, The Blood of a Poet. Talk about ‘further’ and ‘deeper.’

There is a natural marriage between The Church and Jean Cocteau; The Church’s music has a shimmering dream-like quality about it and Kilbey’s lyrics have always had an impressionistic, surrealist bent. Really, the coming together of Kilbey and Cocteau is an arty-farty type’s wet dream, like Brian Eno scoring a David Lynch film, or Laurie Anderson marrying Lou Reed.

I’ve read Cocteau’s novel Les Enfants Terribles, but I’m no cinephile and I’m not familiar with his films. All I know is that they are surrealist in nature and synonymous with cinematic wankery. But you can’t be a Church fan without having the ‘w’ gene so the chance to hear the band play live as the film was projected above them was too good to miss.

I decided not to read up on the film in advance, thinking I’d just experience it free of any intellectual pre-conditioning. Now that I’ve seen the film, I’m not sure it would have helped anyway. 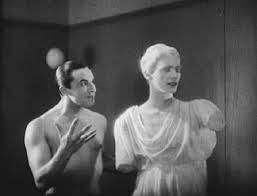 “Just play Under The Milky Way – they’ll love it.”

According to the ACMI host who introduced the event, The Blood of a Poet is Steve Kilbey’s favourite film, or at least the film he immediately nominated as the one he’d most like to score. I can see why some people might find the film interesting, but ‘favourite’ seems a bit far-fetched. ‘Incomprehensible’ is probably the most common reaction on a first viewing, but of course such a view probably just illustrates why Kilbey is an artist and most of the rest of us aren’t.

The session wasn’t sold out but there was a good crowd in by the time the band ambled on and the screen flickered into life. ACMI cinemas are big spaces and the screen is suitably large, meaning the band could set up beneath the screen and not impinge upon anyone’s view.

I won’t give a precis of every scene, not because I have any qualms about spoilers – after all, the film’s been around for more than 80 years – but because such an approach would be boring. Plus it probably wouldn’t clarify an awful lot. Besides, this type of surrealist cinema made up of dream-like sequences, conceptual ideas and metaphysical happenings doesn’t lend itself to a coherent synopsis.

However, the first scene, in one aspect at least, had a nice echo in the Jean Paul Gaultier exhibition that I had just seen at NGV. In the film an artist sketches a portrait and notices that the mouth on his portrait is moving. After much melodramatic emoting – it’s a silent film after all – he hurriedly rubs it off, but only succeeds in transferring the talking mouth onto his palm, where it continues chatting away. The artist then wipes his palm across the face of a statue – one of those classical sculptures of a woman with no arms. The statue, played by photographer and model Lee Miller, comes to life and begins talking to the artist, coaxing him to pass through a mirror into another realm.

At the Jean Paul Gaultier exhibition, mannequins wearing Gaultier creations had facial features projected onto their faces, complete with blinking lashes, roaming eyes and talking mouths that described the outfit they were wearing as well as the circumstances and inspiration behind the collection in question. Like the better scenes in the movie, it was at once disquieting and effective. 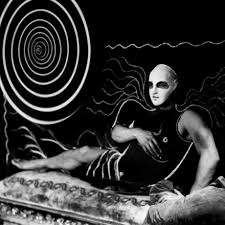 As the film began, Kilbey read the preamble as it appeared on the screen, but other than that, there was no vocal, save for some heavy breathing at one point. Only Kilbey on bass stood, while drummer Tim Powles and the two guitarists, Peter Koppes and Ian Haug (ex Powderfinger, who replaced the self-exiled Mary WilsonPiper), opted for seats from which they traded guitar harmonics.

The music was haunting and atmospheric without being doodly and dull, with Kilbey’s throbbing bass and Powles’ thoughtful percussion driving it along. The guitars provided a sort of ambient dreamscape wash from which occasional motifs emerged. They resisted the temptation to match the unreality of film’s action with abstract dissonance, but chose their moments to up the tempo to illustrate the action unfolding on the screen – most notably in the scene when schoolboys have a snowball fight, which ends with the death of one boy, and another scene when the dead boy’s African guardian angel enters the film.

As the film reached its finale the band’s playing intensified, enhancing the climax of the narrative and adding drama to the symbolic denouement.

The ACMI cinemas boast enormous screens and clear, balanced audio, but by far the best thing about them is the high-backed seats. They are extremely comfortable, particularly after a couple of after-work beers. With an abstract film showing and an ambient soundtrack washing over me, it would have been easy to nod off, and given the disjointed narrative, I’m not entirely sure that I didn’t.

For all of its avante-gardery, I thought the film contained some intriguing scenes and images, and the simple act of trying to work out what was going on kept me involved. Besides, it was a pleasant change from the super hero movies that I’ve been taking my youngest son to watch.

The music may not go on to become central to The Church’s oeuvre, but it was still good. It was probably more to my taste than whatever soundtrack originally accompanied the film. If nothing else, listening to The Church added to the experience, which was the point after all, and watching them play also offered a welcome distraction to the film’s more incomprehensible moments.

There was no post-film mini gig and the audience was well enough behaved that no one shouted out for Under the Milky Way half way through. However, to quote from that song and the title of Kilbey’s autobiography, The Blood of a Poet was indeed ‘something quite peculiar.’