THE EYEBALLS HAVE IT 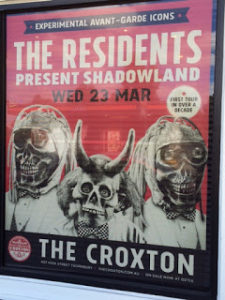 There is a long tradition of musicians and artists who have cloaked themselves in obscurity and deliberately hidden their faces or identities from the public – either because they want to focus attention on their art or simply because it’s a good gimmick. Or possibly because they realise how shallow we are and suspect that we wouldn’t buy their records or stream their radio waves if we were to see what they actually looked like.

Sia is the most recent to mask her appearance, but before her front mullet there was Deadmou5 and before him The Knife, and before them Gorillaz, Pussy Riot, Insane Clown Posse, Daft Punk, Slipknot, TISM and Kiss.

Before any of these bands, however, there was The Residents.

The Residents got together in San Francisco in the early1970s and have spent their entire career masked, most famously beneath gigantic eyeballs and top hats. Over that time they’ve released more than 40 albums of demented avante-garde music and unlike most of the other artists listed above, they’ve also kept their identities entirely secret for that time, which seems almost perverse in the age of celebrity and the ‘selfie’.

From their first album in 1974, Meet The Residents, that poked fun at The Beatles, to The Third Reich ‘N’ Roll, a brilliant deconstruction of the history of pop music that should be considered alongside David Bowie’s Pin Ups and Nick Cave’s Kicking Against The Pricksas one of the great covers albums, through to Eskimo, their exploration of Inuit music and culture, and their American composer series, The Residents were truly the first post-modern rock band – commenting on and actively undermining the medium as they operated within it. Very ‘meta’ as the kids would say now, well at least the pretentious ones would. 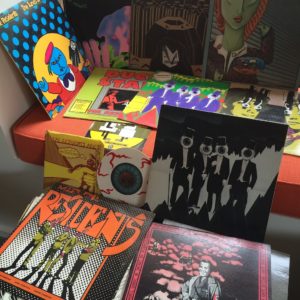 My favourite Residents albums are Duck Stab, Eskimo, Mark of the Mole and The Commercial Album – the latter an album of 40 one-minute songs for which they bought advertising time on radio and television so they could obtain airplay.

And here they were, The Residents at The Croxton Park Hotel of all places. It may not carry the political and sociological significance of The Rolling Stones playing Havana, as also occurred this week, but The Residents playing in Thornbury is equally novel, and far easier to get to.

They’re here under the auspices of the Byron Bay Bluesfest. I’m not sure in which permutation of blues The Residents might be said to operate, unless you take the long view that all rock music and its offshoots stem from the blues, but to me it would be like Rammstein playing the Melbourne Jazz Festival.

The Residents have toured Australia and Melbourne twice before; in 1986 they played the Seaview Ballroom as part of their 13thanniversary tour and in 2005 they played The Forum as part of an experimental music festival. On both occasions I was there with my friend Ralph. 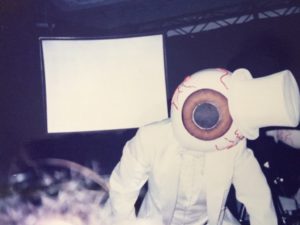 Getting eyeballed by a Resident, Seaview Ballroom 1986

It was Ralph who introduced me to the sound of The Residents. As teenagers our group of friends would gather regularly at each other’s houses and play records. Ralph had several Residents albums, possibly because their record label was Ralph Records, and we all got into them to one degree or another. For this gig Ralph and I were joined by Judy, who had been among the original crew in Ralph’s bedroom listening to Residents albums, as well as John and Bryan. This was a seated show but we took some stools on the side to give us an elevated view. 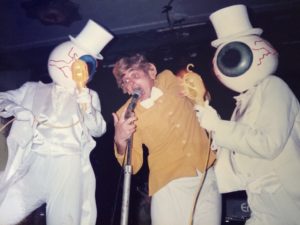 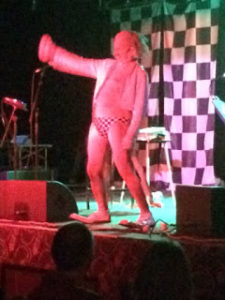 I was at the bar getting some drinks when the band came on stage. The barman hadn’t looked up as the music started. However, when the first words rang out a look of genuine bemusement crossed his face when he registered the singer wearing a white tuxedo coat over a sculpted body suit, rabbit mask with horns and black and white chequered Speedos. I was a little taken aback myself.

The Residents now play as a trio and go by the names of Randy, Chuck and Bob, although as ‘Randy’ explained, ‘Chuck’ has retired and it is actually ‘Rico’ on keyboards and sequencer. Given no one knows the real identities of the band members, it’s surprising that they don’t simply enlist someone else to fill in; it’s not like anyone would know.

Appropriately, given we were approaching Good Friday, they opened with Rabbit Habit. After which ‘Randy’ removed his rabbit mask to reveal his old man mask – a bald pate with long white hair at the back and sides. He looked a bit like Riff Raff from The Rocky Horror Picture Show. In fact the whole set looked a bit Rocky Horror and I was half expecting to hear Time Warp.

The show is called ‘Shadowland – Part 3 of the Randy Chuck and Bob Trilogy.’ I have to confess I‘m unfamiliar with parts 1 and 2, and being The Residents, there is no gurantee that such prequels ever existed. If they did, the tours never came to these parts. As ‘Randy’ explained however, part 1 was about ghosts and death, part 2 dealt with love and sex, while Shadowland, part 3, is about birth and rebirth. “So life in reverse” he added. 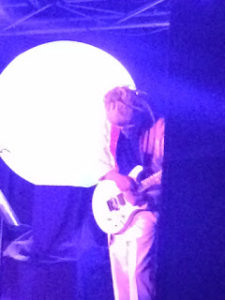 Bob hiding behind a mask and the speaker stack

The show featured songs from across the full span of their 40-year career, but even though I have more than 20 Residents albums, my most recent purchase was God In Three Persons from 1988. As such I was familiar with only half their set – and some of that only because I listened to the live recording of Shadowland on the day of the show.

The show they’ve brought to Australia differs slightly from the live recording and they played more songs from the 1980s period than I was necessarily expecting. Even so, musically the show was somewhat limited and unvaried. Regardless of which buttons ‘Rico’ pushed and irrespective of which knobs he twiddled, the sound he generated didn’t vary significantly from a sort of rhythmic jungle clanging with keyboard overlay. Meanwhile ‘Bob’ wrung an almost constant Keith Levene type noise from his guitar. It was good, but there was not much in the way of variety. ‘Randy’ was also adding some electronic elements to the general soundscape and filtered his voice through various effects to get different vocal sounds and timbres. When he wasn’t singing he lumbered around the stage like a chimpanzee, swinging his arms about like someone with physical Tourettes. Not particularly elegant, but then given his get up that was clearly not his intention.

The songs came in album clumps interspersed with short films projected onto a large spherical orb (an eyeball?) at the back of the stage. The films were confessional monologues from masked speakers, amusing vignettes that broke up the somewhat claustrophic music.

After performing tracks from relatively recent albums, by which I mean this century, The Bunny Boy and Freak Show, they played selections from Duck Stab, including one of their undeniable classics, Constantinople. The audience, mainly males in their late 40s and early 50s, started to loosen up at this point and some of us were even singing along to the song’s nursery rhyme refrain, “Here I come Constantinople, Here I come Constantinople, I am coming Constaninople, here I come.”

After a film called The Diver, during which ‘Randy’ tried to catch the bubbles projected onto the screen, they even played some extended and reinterpreted versions of tracks from The Commercial Album; Easter Woman, My Second Wife and Loss of Innocence. These songs were greeted with whoops of recognition from the audience and there was even one guy up dancing.

After the percussive piano and whining guitar of Hard and Tenderlyfrom God in Three Persons they played Ship of Fools from Mark of The Mole, concluding the show with the salutary observation…

“All our lives we love illusion,

And the need to know we are alive”

…which may or may not sum up the nature of existence, but which certainly captures the experience of listening to The Residents. 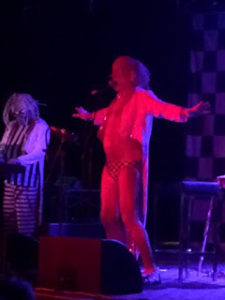 Even though Ralph told me there would be no eyeballs (he had watched the show on YouTube), I was still hoping they would make an appearance for the encore. For brand marketing purposes if nothing else. But no, not so much as a costume change, unless you count the bass drum Randy had strapped across his chest when they re-emerged.

They performed Mourning Glorieswhich Ralph whispered to me was from Not Available, and Fourty-Four No More, and then with a wave of their gloved hands and a nod of their masked heads, they disappeared back into the obscurity from which they’d so briefly emerged.

It was an engaging stage show, even if the music didn’t contain quite the same nuance and variety as their records, and the short films were cryptic and entertaining. What any of it had to do with birth and rebirth is anyone’s guess, and would take more analysis than I’m prepared to give it. A more immediate and intriguing question for many in attendance was why there was no merch stand?

We thought about waiting by the stage door to see if we could catch them unmasked as they emerged, but decided instead to repair to the lounge for a drink. There was once a small cottage industry of inquiry dedicated to finding out exactly who The Residents were. There was even a rumour that they were in fact The Beatles, reinvented as a post-deconstructuralist multi-media art collective, but I’m pretty sure it was The Residents who started that one.

For me the greatest achievement of their obscurity is that it has outlasted curiosity. These days it’s probably not that difficult to find out their real identities, but I doubt that most of their fans particularly care anymore, and probably wouldn’t even want to find out anyway. When Kiss took off their makeup, their fans were so horrified they shunned the new look and the accompanying record, and the band had to immediately powder up again for the next tour. I suspect the same thing would happen with The Residents. While they’re in costume they remain the perennial weird musical pranksters, but once they take off their masks and we realise they’re just crotchety old 60 somethings, like us, all the mystique and magic will evaporate and we’ll lose interest. Until then, I’ve got my old record collection to rediscover.

The set list below is my best guess based on the songs I recognised, the titles Ralph whispered to me as they played them, the live Shadowland recording and the set list from their recent show in London, as published on setlist.fm.com