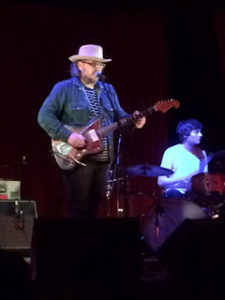 Tweedy & Son – Jeff and Spencer on stage
at Meeniyan

The name ‘Meeniyan’ is supposedly derived from the Aboriginal word meaning ‘moon behind the trees over the water,’ which apart from sounding like the title of a David Sylvian instrumental piece, seems like a lot of information to pack into one word. In a way this suits the small regional town that carries the name because, musically at least, it too contains more than you might expect.

Meenyian is a small rural town in Victoria, approximately 125 kms south east of Melbourne, with a population of less than 800 people, so it’s not the sort of place you’d normally expect to see blues legends, indie rock icons and alt country hipsters. Yet Meeniyan has hosted more major Australian and international artists than towns 100 times its size.

Perhaps it is not so unusual that singers like Paul Kelly, Megan Washington and Dan Sultan would visit, after all, they live in Australia. Less likely however, is the procession of well credentialed American musicians who have trod the boards of the Meeniyan Town Hall; including Martha Wainwright, Calexico, Mavis Staples, Sharon Jones and the Dap Kings, Justin Townes Earle, Cat Power, Neko Case and Jason Isbell, just to name a few. That’s not a bad lineup for a town with one strip of shops. Most of those acts bypass Canberra, the nation’s capital, when they tour, but make a point of stopping in at Meeniyan.

Why they visit is another question. The Town Hall may sound grand, but it is no architectural wonder. It is the old Mechanics Institute Hall, essentially your standard rural community hall with a stage at one end and a window through to the kitchen where you might expect to see representatives of the CWA boiling the urn and buttering scones. Clearly someone at Lyrebird Arts Council, who runs the music program, has a thing for Americana based on the acts that perform there, but there must be smething else to attract these artists – proximity to Wilson’s Prom, a farm stay and home cooked country meal? It’s unlikely that the usual muso enticements of hookers and blow come into it. 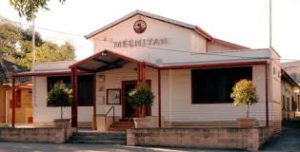 What attracted us was Tweedy, as in Jeff Tweedy of Wilco with his son Spencer on drums playing songs from their album Sukierare. I took the 2.5 hour drive with friends John and Brenton and we were meeting five or six others there as well.

It’s a great set up. No tickets are scanned; you just show the email they sent you when you booked. There are candlelit tables covered in red and white gingham tablecloths, and it’s BYO food and drink. As we walked in people were unpacking picnics from Eskies and uncorking bottles they bought at the bottle shop over the road. You can even order pizza from the local pizzeria and they deliver it to the hall for you. We’d stopped in at the Mirboo North Brewery about 30km out of Meeniyan and picked up some Gippsland Gold Pale Ale to see us through the night.

The album Sukierae is a sprawling double disc set named after the wife and mother, respectively, of Jeff and Spencer Tweedy. They recorded it for her while she was being treated for lymphoma. She is in the audience this night, Jeff Tweedy announced at one point, so hopefully that means she has recovered.

The first half of the show featured material from the album, opening with gentle country tinged songs, Hazel and Fake Fur Coat. They lifted the tempo with Diamond Light Pt. 1 that features Spencer on drums and bass player Darin Gray in rumbling duet. Gray stands at the lip of the stage, legs wide apart, holding his chin out defiantly and nodding his head in time with his own rhythm. 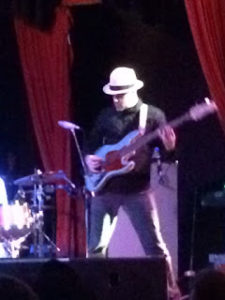 The sound in the venue is good and our table is up near the front so we have an excellent view. There are some beautiful songs on Sukierae, in particular Summer Noon, intimate and personal songs with lilting melodies that sit well in this country setting. Jeff Tweedy’s voice has a weathered, plaintive tone that is supported by backing vocalist Sima Cunningham.

The band is rounded out by Sima’s brother Liam on guitar and keyboards and Jim Elkington on guitar. The combination of father and son Tweedy plus brother and sister Cunningham, who went to school with Liam, lend the band a Partridge Family feel, just without anyone quite as spunky as David Cassidy.

Tweedy introduces New Moon as one of several waltzes they’ll be playing, and true to his word, they follow up a few songs later with Wait For Love that includes a whistling interlude. Single Low Keyand the heartfelt Nobody Dies Anymore round out the first half as the band disappear, leaving Jeff Tweedy alone on stage for a solo set.

His opening solo gambit is the classic I Am Trying To Break Your Heart from Wilco’s Yankee Hotel Foxtrot followed by One Wing.

For most of the Wilco fans in the audience, Jeff Tweedy’s solo set was probably the highlight of the night. He even fielded a few requests and started Hate It Here before having to seek lyrical prompts from the guy who requested it. Given this opening, the audience member continued singing from his seat until Tweedy had to say, “I’ll take it from here.”

Having had a sly dig at Rolf Harris, our friend Manny shouted out for Two Little Boys, but sadly Tweedy didn’t oblige. Instead he rendered further requests redundant by closing with fan favourites Passenger Side, I’m the Man Who Loves You that he dedicated to his wife, and A Shot in the Arm.

The band rejoined Jeff Tweedy for an encore of cover versions, including Mavis Staples’ Only the Lord Knows, Neil Young’s The Losing End and Woody Guthrie’s California Stars.

A standing ovation brought them back for one more, and they added their voice to Bowie tribute season, playing Five Years. Tweedy said they’d never performed the song before, which was perhaps evident when he fluffed a few of the lines, but really, when the world is about to end, as it is in the song, we won’t hold that against him.

The moon was well above the trees and over the water as we embarked on the drive home. John had a Wilco mix going in the car and we sung our way back down the South Gippo Highway and were home by 1am.

Encore – I’m glad we saw Tweedy in Meeniyan, but fans that opted for the Melbourne show at The Recital Centre got a special treat when Courtney Barnett joined band for the final encore, performing Bowie’s Queen Bitch.

I Am Trying To Break Your Heart

I’m the Man Who Loves You

A Shot in the Arm

Only the Lord Knows and He Ain’t You