…well not quite, but I couldn’t resist the heading. Nonethless Big Thief were very impressive in their opening slot. 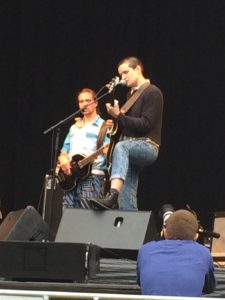 Having heard they were to support Warpaint for their Zoo Twilights show, I had a listen to their album Masterpiece on the day of the gig. My first thought, even before I heard it, was that if you’re calling your album Masterpiece you’d want to be reasonably confident in its quality.

My second thought, after I had heard it was, ‘if anything, they’ve undersold it.’ The songs are extraordinary in their vulnerability and their poetry and the playing is pitch perfect. In terms of the originality of the writing, it was reminiscent of hearing a new voice like Tori Amos or PJ Harvey on their debut albums for the first time. I bought a copy of the album at the merch tent before they even came on stage.

So I was excited about seeing them live and they impressed me even more. Despite her shyness, lead singer and songwriter, Adrianne Lenker, has a magnetic stage presence. Her fresh crew cut gave her an almost menacing look.

Now I’m no psychologist, but a woman who suddenly shaves her head, props one foot on the foldback speaker and then opens the performance singing a vulnerable lament before spitting out the refrain, “Lies! Lies! Lies! Lies!” might just be going through something too big for my small mind to comprehend. In any case it was a powerful opening.

On the Big Thief website Adrianne Lenker describes her songwriting as, “the process of harnessing pain, loss, and love, while simultaneously letting go, looking into your own eyes through someone else’s, and being okay with the inevitability of death.” Hmmm, pithy. At least it’s an advance on the old, “three chords and the truth” quote. And not that I should be surprised, after all, if anyone is going to know her methodology, it’s her, but having heard the album, she’s absolutely spot on with her assessment.

In addition to Lenker, the band consists of Max Oleartchik on bass, Jason Burger on drums and Buck Meek on lead guitar. As far as rock names go, Buck Meek is one of my favourites – it’s got the yin and yang of rock: the country rock bravado of ‘Buck’ followed by the almost anti-rock surname of ‘Meek.’ He plays with real feeling though, riding every note with a raised eyebrow, a grimace or nod or even a dip of his whole torso. 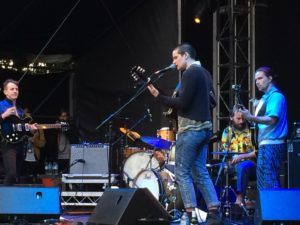 What was most noticeable about the band was their anti-fashion. Either that or they’d left their stage clothes back in the hotel. Meek was the only one who dressed as if he was appearing in front of an audience, wearing a slightly garish shirt. The rest of them looked like occupants of a share house at a Sunday afternoon bong session. Burger on drums was wearing a Hawaiian shirt while Oleartchik was wearing board shorts and had a plush toy marsupial sticking out the top of his shirt. Lenker was wearing stonewash denim jeans but had at least dressed for the occasion with a zebra print shirt under her jumper.

They worked through half a dozen tracks from the album plus a few other songs. Meek sang an a capella country song that might be called You Said You Were My Best Friend, but the highlights for me were Vegas, Parallels, Paul and the aptly named Masterpiece.

Lenker’s shy modesty, that belied her skinhead cut, won over the audience and they played an impressive set that was raw and powerful. Warpaint’s Emily Kokal and Stella Mozgawa watched from the sidelines, with Mozgawa sticking it out for the entire set.

Warpaint – show us ya pedals! 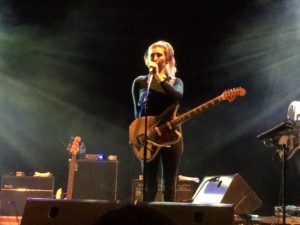 During a fleeting break in Warpaint’s set, the obligatory cry of “We love you!” was heard above the fading applause. Guitarist and vocalist Theresa Wayman duly replied with a smile and a ‘we love you too’ as she must do at virtually every gig they play. The follow-up interjection, however, was less expected. It was a different voice, a male this time: “I love your tone. What pedals do you use?”

The comment was unexpected on several levels; firstly that he thought he might receive an answer about technical guitar accessories mid-gig, secondly that you don’t need to ask it anyway – the answer surely being ‘the same ones that Robert Smith of The Cure uses,’ if her guitar sound is anything to go by, but the main reason the comment was unexpected was because it’s not the sort of comment you would necessarily expect to hear a man yell out to the four striking looking women of Warpaint. Unless, just as ‘Netflix and chill’ somehow morphed into code for ‘come over and have sex’: “I love your tone. What pedals do you use?” might be guitar nerd speak for ‘show us ya tits.’

Having arrived early I was near the front for Big Thief, so when the crowd stood and moved to the front for Warpaint I ended up quite close to the stage. A group of girls pushed in front of me, but that was okay, they were obviously big fans so I let them through. Plus they were among just a few people who were shorter than me. It was crowded up the front but not pushy and so long as I could see Jenny Lee Lindberg do her thing on the bass, I was going to be happy. 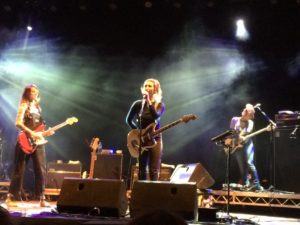 The band opened with the instrumental Intro and went straight into Keep it Healthy from their self-titled album. As they finished the song one of the girls who had pushed through turned to me and said how great it was to see so many men here. Indeed, while outnumbered, there were quite a few blokes nodding their heads near the front. I assented and muttered to her something about Warpaint being a great band. I’m not sure why she necessarily thought men wouldn’t be receptive to all-girl group. On the other hand I didn’t want to shatter her illusions about the musical maturity and gender blindness of the males in attendance, so I didn’t bother pointing out that quite possibly their very girlness was part of the appeal.

Enamoured as I might have been by the band, I was less enamoured by this girl and her friends. Although they were just enjoying a fun night out together, they became the bane of the gig for me. It started out okay when they were harmlessly squealing over some celeb they could see watching from the sidelines – was it Josh Pyke? He looked like a Josh anyway. I recognised Kurt Vile and Courtney Barnett also standing in the wings, so if nothing else, Warpaint had brought out the heavy hitters. 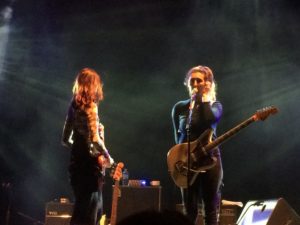 But back to the girls, I didn’t object to their dancing, even if they did elbow and buffet me about a bit – it’s a rock gig, it goes with the territory. And even if the parent in me worried about the wisdom of them necking bottles of wine throughout the show, it was their choice, even if I could see it wasn’t going to end well. The problem was their yakking. It was constant and it escalated as the show went on. Something in the timbre and pitch of their voices, and the fact that they were speaking over the top of one another, forcing exponential rises in volume, enabled them to drown out the band – that is a four-piece rock band with drums, three amplified guitars and miked up vocals playing through a PA system. Quite extraordinary. 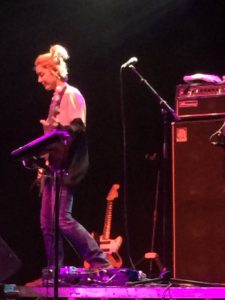 Where Warpaint’s combined voices were working in soft, dreamy harmonies, the voices of these fans were working in high-pitched competition. As their voices escalated from shouting to shrieking, another girl nearby asked them to ‘shut up,’ however, it only quietened them for about two songs before they began to wind up again. I was just going to have to wait it out. Given they each had a bottle of wine, it was only a matter of time before they had to edge their way out to the toilet.

I tried to maintain my focus on Jenny Lee Lindberg, not in a dirty, pervy way, well, not entirely. I love her bass sound. For me it defines the band and reminds me of Jah Wobble’s bass playing in PIL or Simon Gallup’s playing on early 80s Cure records. I even bought her solo album. But seeing her live was a revelation. It was admittedly a chilly night but she looked like she was dressed for a night on the couch in front of the telly, rather than a night on stage in front of a audience. She was wearing a baggy monochrome jumper with the word RIOT written in large upper case font on the front – it’s a song title from her solo album, but also a somewhat anachronistic slogan on a baggy knit. Her bass sound was deep and resonant, and like Gallup in The Cure, it is often this that provides the melody and propels the song along, while Emily Kokal and Theresa Wayman’s guitars shimmer and slide across the top. But it was not just her playing, her dancing made her eminently watchable. Not a note escaped her reverberating strings that wasn’t accompanied by a sidestep, skip or shuffle. It was quite hypnotic. Okay, I better stop now before it does get pervy.

The setlist consisted of an even mix of songs from each of their three studio albums, with no emphasis given to their recent album Heads Up, although most of the songs they played from it – Heads Up, So Good and Whiteout – fitted into the set snugly, sharing similar DNA to their older songs. Only The Stall with its breezy soul stylings and New Song with its pronounced dance beat and pop gleam broke the mould. Later as I left the venue I overheard two men debating the relative merits of the set, with one of them saying that although he liked most of the songs, ‘that New Song can go and get fucked.’ I agree, it is arguably their weakest song, but he seemed to take it quite personally. Besides, as I walked to the tram after the show, it was New Song that was running through my head. 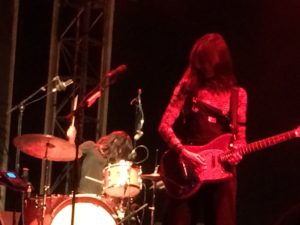 The tracks from their earliest recordings worked the best, and Elephants was at least thematically appropriate given the setting. The playing throughout was very tight with Stella Mozgawa on drums keeping the rhythm going so that one song ran seamlessly into the next.

Battling against a curfew there was no time for the charade of the encore, so Kokal gave the audience a choice of Disco or Bees for the final song. Jenny Lee was advocating Bees, to the point of getting an audience chant going. I would have preferred Disco, but was happy to concede. And her efforts prevailed for that is the song they finished on. 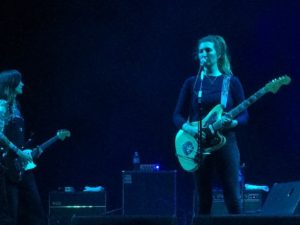 Warpaint were a very tight live unit. Overall I concur with the appraisal from the audience heckler earlier in the night; I loved their tone. 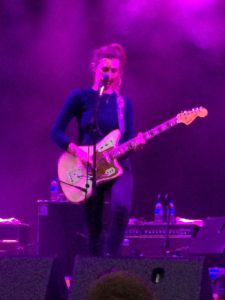