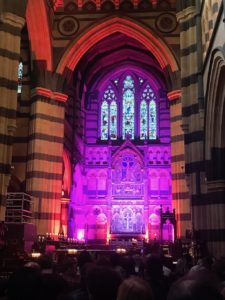 Normally populated by Christians and tourists, tonight the pews were filled by music fans for one of the more intriguing shows of Melbourne Music Week. Sarah Mary Chadwick, originally from New Zealand, but now resident in Melbourne, was performing her album The Queen Who Stole the Sky on the cathedrals’ famous organ.

The album is a song cycle composed for and recorded on the ‘other’ famous organ at Melbourne Town Hall, situated at the next intersection, which partly explains why I rocked up to the wrong venue before realising my mistake.

But I reached the queue on time and with entry set at a mere $10, there were quite a few people in front of me. But St Paul’s is a broad church, literally, and there was plenty of room inside for all of us. I met Ralph and Dave and we slid across the cushioned pews.

This is where the gig got a bit weird. St Paul’s is set out in a Latin Cross design. The congregation are situated in the nave, which is the longer chamber looking through the ‘crossing’ towards the apse and the magnificent stained-glass windows.

The organ, meanwhile, is located in the southern transept, or one of the short arms of the cross. Those familiar with church architecture will realise what that means.

After Chadwick appeared in the crossing to wave to us in greeting, she disappeared stage left to enter the box where the organist sits. Which is all good, but no one in the audience – which numbered close to 1000 people – could see her. No one.

As the first sombre note from the organ reverberated through the stone walls of the church and Chadwick began singing, most of us in the audience began looking around confusedly in the realisation that we were not going to see anything of the artist. 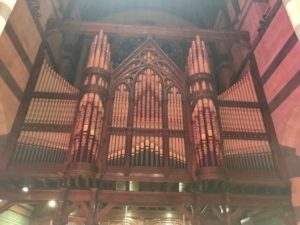 Sure, we had a good view of the majestic stained-glass windows, which was slowly changing colours in the twilight, but it wasn’t quite the same as watching Chadwick perform. This might have suited her, because on the other occasion I’ve seen her play, she seemed nervous and shy. Admittedly, even if we had a view of the box where she played, we would only have seen her head bobbing away. So for $10, it was still pretty good value.

And really, it was fine. If you closed your eyes you could just let the deep lingering tones of the organ and Chadwick’s equally deep voice rush through you.

She performed the album beautifully, the organ’s low, sonorous notes reverberating off the stone walls with majestic oomph (if that’s a thing), and her raw, heartfelt lyrics adding gravity and depth to her playing. The music filled the space. With the organ’s layered, interlacing tones you might have thought there were two or three people up there playing – and for all we knew there were. 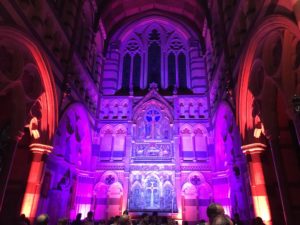 I’m not sure if she played the album in sequence – I only bought my copy at the merch desk on the night – but it was a magical, raw performance, even if we couldn’t see her.

She re-appeared at the top of the nave to take a brief bow before disappearing once more into the cathedral’s labyrinth. 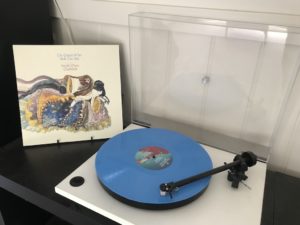