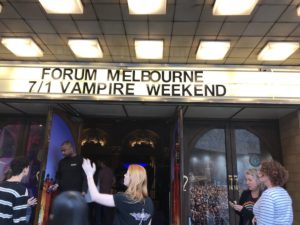 I saw Vampire Weekend at Festival Hall with my son Oscar last time they played in Melbourne in 2014. It was his first gig and the tour t-shirt has since been passed down to his younger brother, Declan. This time the entire family went, Oscar, Declan, Angela and moi, as well as friends Kath, John, Sue and their son Seb.

Not only that but we paused our summer holiday on the peninsula to drive back for the show. “To go away on a summer’s day, never seemed so clear.”

Vampire Weekend is one of the few bands the whole family like. The infectious melodies, sunny licks and rolling rhythms are the soundtrack of family car trips and gatherings. A happy ‘go-to’ when the boys are over my morose post punk and the adults tire of their hip hop.

A large globe of the world with Australia facing outwards hung over the stage as the venue gradually filled. The audience was a cross-generational mix of ages and we weren’t the only family group milling about. At first it was surprising that the boys hung with us, until I realised that we were useful for buying the drinks. With young men drinking pre-mixes, my first two rounds cost $97.00. The sooner the band came on the better.

The place was packed by the time the extended Vampire Weekend line-up filed on to the stage. With the departure of Rostam Batmanglij from the original group of four, there are now seven people taking the stage. Which is perhaps an indication of how much Batmanglij contributed to the sound – it took three people to replace him. 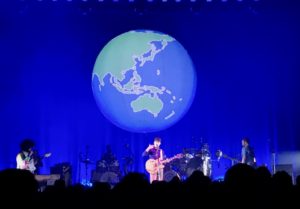 If Bambina from new album, Father of the Bride was a low-key opener, they picked up the tempo with upbeat renditions of Holiday and Unbelievers that got the audience bopping. Bassist Chris Baio wore a huge grin as did new guitarist Brian Robert Jones (important to add in the ‘Robert’ I think), although though it was harder to see through his massive affro and beard. The distinctive opening riff of Cape Cod Kwassa Kwassa was greeted with an ecstatic roar until a power outage left the band playing in silence.

After a 5-10 minute pause during which roadies and sound technicians poked about on stage, the band returned and again set up the riff for Cape Cod. It was all going swimmingly until the power cut out at exactly the same point of the song. Was someone playing a note they shouldn’t have? Was something turned up too loud? Was it the venue just giving us more opportunities to buy drinks? Either way, the band disappeared again, this time for longer. The crew behind us on the mixing desk didn’t seem overly perturbed, and no one was rushing about on stage, but I was beginning to think that we’d interrupted our holiday and returned for nothing. The audience, perhaps surprisingly, remained remarkably relaxed and patient – no shout-outs or slow hand claps, just a general hubbub of conversation. No one seemed particularly bothered. 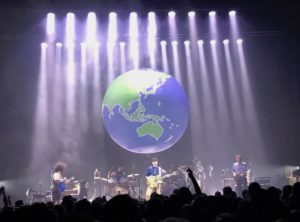 When they eventually returned, Ezra Koenig announced they would pick up the song from the second verse, skipping the trouble spot. This time they got all the way through and received a rapturous reception. They got another cheer when Koenig announced that they would still play the full set, regardless of the interruptions. Which was good, but it meant I’d possibly be still be on the road at 2am by the time we got back to the peninsula.

From there we were treated to a long, exuberant show packed with highlights from across the band’s four albums. Sympathy throbbed, Step inspired an impassioned singalong, “The gloves are off, the wisdom teeth are out, what you on about, I feel it in my bones,”  Rich Man was dedicated to Democratic candidate Bernie Sanders and Horchata brought on another mass singalong.

There were surprises too with New York New Dorp – a song Koenig contributed to hip hop producer SBTRKT’s 2014 album Woner Where We Land. He also revealed that Ezra Hannah Hunt was originally inspired by a line from the Australian film Picnic at Hanging Rock. 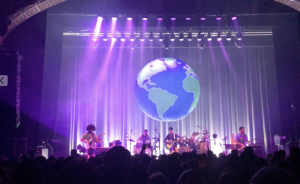 In an array of fan favourites, obvious highlights included an exuberant run that featured Harmony Hall, Dianne Young, Cousins and A-Punk. The band were tight and Brian Robert Jones played some ripping solos that held everyone spellbound.

They concluded their set with Jerusalem, New York, Berlin before returning to play Sunflower as an encore. 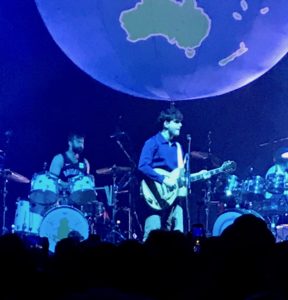 From there Koenig took requests, picking out members of the audience and asking what they wanted to hear. We got at Diplomat’s Son, Ottoman – yes, there’s always someone in the crowd shouting out for the deep cut, and The Kids Don’t Stand a Chance, before they wound things up with Ya-Hey during which they released large inflatable globes of the world into the crowd that we punched around above our heads for the duration of the song.

It was an utterly joyful and effervescent show that gave us plenty of talking points and singalong material for our long drive back to the peninsula. 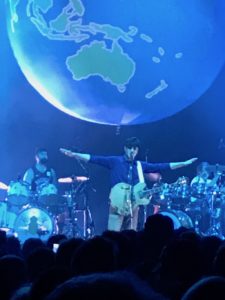