I’m certainly no maverick rebel or original thinker, no wannabe Jordan Peterson, but occasionally I find myself outside the generally accepted wisdom. For example, while I’ve always quite liked Arctic Monkeys, it’s only with the advent of their new album, Tranquility Base Hotel and Casino that I find myself proclaiming their centrality to the modern musical zeitgeist.

While most people adore the immediacy and stomp of AM or the thrashy exuberance of Whatever People Say I Am, That’s What I’m Not, I prefer the keyboard doodlings, smooth lounge stylings and loquacious wordiness of ‘Tranquility Base…’ Such a great album. Lyrically it’s a masterpiece. Admittedly, every time I hear it I tend to want to play Bowie’s Diamond Dogs immediately afterwards, but surely that’s a sign of its brilliance more than anything else.

My kids Oscar and Declan like Arctic Monkeys too, so we made this a family outing – and even if I was the only one in the audience looking forward to hearing One Point Perspective more than Do I Wanna Know? – at least there was going to be something for everyone.

I met up with an old friend Steve – he of Next Question fame – for a drink in the foyer. He is far more knowledgeable on the band than me (and many other things besides) and gave me a few pointers on what to look out for. I admitted to knowing very little about the band’s output between Whatever People Say I Am, That’s What I’m Not I and AM. He recommended Humbug. 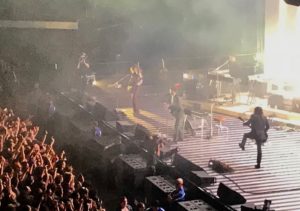 I haven’t seen them play live, but I remember being very impressed with them at either the opening or closing ceremony of the London Olympics in 2012 and thinking that I must see the next time they come here. I didn’t as it turned out, but I was determined to see them this time.

Our seats were high up on the side, so not ideal, and it meant that most of the light show passed us by, but the sound was okay. Mini Mansions were up first and they were pretty good. I saw them when they supported Tame Impala a few years ago – I presume they play their own shows when they visit Australia, but I’ve only seen them as a support act. Perhaps they’re just really good touring companions? 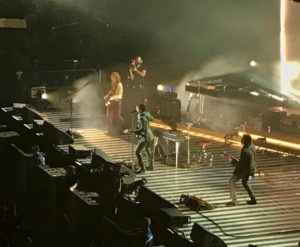 Eventually the lights dimmed and the Arctic Monkeys strode on and took up positions across the stage – the four principal Monkeys supplemented by a further four musicians. All of them immaculately dressed in suits, a dress code that matched the cocktail lounge vibe of the stage setting.

Next up was a blistering guitar and drum assault that allayed the fears of anyone thinking that they were in for a night of cocktail lounge music. ‘Brianstorm’ Steve texted. It was awesome. 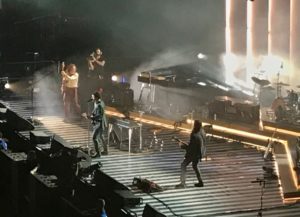 From there the band cherry picked highlights from across their career – AM was the most heavily represented album. Snap Out of It got my boys to their feet and that set the standard for our bank of seats with everyone behind us forced to stand. I make no grandiose claims about my parenting, but clearly I did something right; you can’t sit through an Arctic Monkeys gig!  Declan waved his iPhone torch back and forth at the appropriate moment and sang along to songs I didn’t know he’d even heard.

The band played exceptionally well. The sound was loud and clear, and Alex Turner is the genuine rock star article.  Whether he’s crooning at the keyboard, spitting out a snide put-down or wrenching blistering chords from his guitar, he exudes the same cool aloofness as Nick Cave in his pomp.

Songs from Tranquility Base Hotel and Casino were evenly spaced throughout the set – clearly the band had received the memo about what most of their old fans thought – but there was enough for me to enjoy.  Every album was represented and they aired most of their singles throughout the course of the gig. 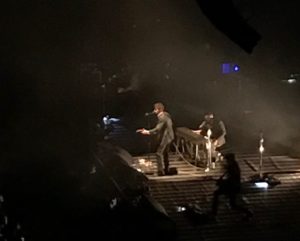 Outside the songs from Tranquility Base and big hits like Do I Wanna Know? And I Bet You Look Good on the Dancefloor, Brianstorm and Pretty Visitors were the highlights of the night for me.

Star Treatment opened a fantastic encore (“I just wanted to be one of the Strokes”) and was followed by No. 1 Party Anthem, a song from AM that, although we didn’t know it at the time, hinted at the new direction the band were about to embark on.

They closed with the raucous and rousing R U Mine? from AM – and after such an exhilarating gig, the answer was a fairly simple, ‘Yes’

I gave it four stars out of five, and that’s unheard of.

Four out of Five
Brianstorm 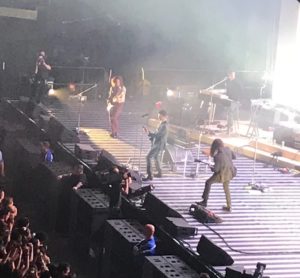 Snap out of it
Crying Lightning
Dancing Shoes
Science Fiction
Arabella
Library Pictures
505
Tranquility Base Hotel and Casino
Teddy Picker
Knee Socks
Don’t Sit Down ‘Cause I’ve moved Your Chair
Cornerstone
One Point Perspective
Do I Wanna Know?
Pretty Visitors
I Bet You Look Good on the Dancefloor
——–
Star Treatment
No. 1 Party Anthem
R U Mine? 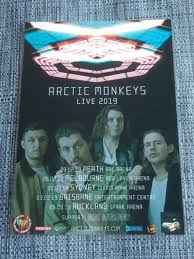