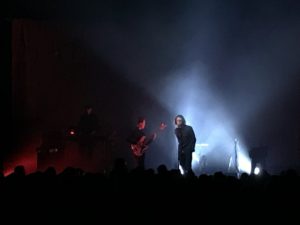 What’s in a name? Well, in the case of City Calm Down, there is an element of serendipity, at least with respect to Friday night’s show at the Forum.

The day of the show was wet and wild with fierce storms, gusting winds and heavy downpours. I was planning to catch public transport in so that I could enjoy a few drinks, however  the weather was so wild I hatched a contingency plan to drive. But just as I was about to leave, the storm broke and the rain subsided. I quickly hoofed it to the station and got to the show nice and dry.

Later that night after the gig the winds picked up again and there were Biblical downpours that lasted for the rest of the weekend. Only for that brief window of City Calm Down’s show was there any respite. City Calm Down indeed – I couldn’t help but wonder if the band’s name somehow influenced the weather. If so, I’m a little nervous about Rolling Blackouts Coastal Fever’s forthcoming tour, to say nothing of Anthrax’s impending shows.

The venue itself is a measure the band’s ambition. This was perhaps the biggest headline show they have done, so it was good to see The Forum crowded for the occasion. I was there with Graeme, Fiona and Mark and such was the throng in the mosh pit, we just took a spot up near the back. We thought we were being clever standing behind the wheelchair access area, until one of the carer’s returned and stood in font of us with his two metre frame. 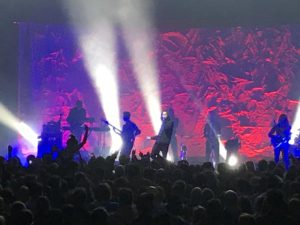 If the band’s ambition was evident in the choice of venue, it was even more so in their performance, for rock start tropes drip from them – the big sound, the studied poses from singer Jack Bourke, the hair, the dry ice that billowed in like the early evening storm and a backdrop that made the stage resemble a cave. The lighting went for single colour hues cut through with noir spotlights. They also went very heavy on the strobe – if you didn’t suffer from epilepsy before the gig, there was a pretty good chance you might by the end of it.

They opened with Distraction/Losing Sleep, although it took a while to tell, because singer Jack Burke’s microphone wasn’t turned on for the first verse. They followed this with Blood, another up tempo track from new album Echoes in Blue. From there the set was evenly paced between big anthems and ballads, and songs from the new album mixed in with song from its predecessor, In a Restless House. 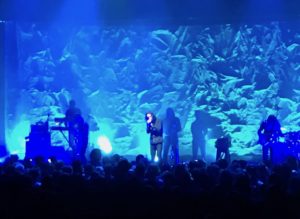 The highlights for me came at the back end of the set when they rolled out Border on Control, Falling, Joan, I’m Disappearing, Kingdom and Rabbit Run more or less in succession. Fiona caught me singing aloud the refrain from Kingdom, “You said I should have opened my eyes, I was terrified of what I might find.” I don’t know if that line has any deeper resonance for me, but They closed with Your Fix, and kept current crowd pleaser In This Modern Land for the encore.

I saw them play at the Toff in Town for a free pop-up gig the night Echoes in Blue was released. On that night they played through their new album, but this performance was far superior, now that the new songs have been properly road tested. 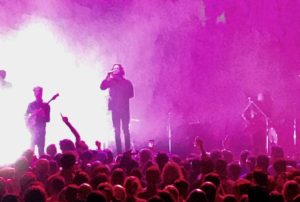 I have written before that they sound like The National crossed with Simple Minds, so it was interesting to hear Fiona say they remind her of Tears For Fears, while Graeme noted a Bauhaus influence, though that might just have just been the line, “I’m the one who wants your blood.” They are of course all that, but above all, they are their own band, and if they continue to refine their sonic signature, the day may yet come when future bands with a big widescreen sound are compared to City Calm Down.

This was a good gig that left me happily humming the chorus from In This Modern Land as I bustled over to Flinders Street station to get  the train home. 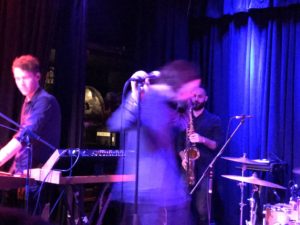 City Calm Down at The Toff in Town