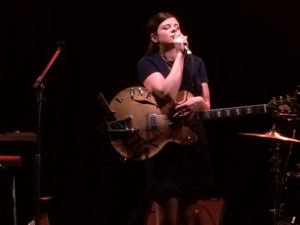 What a difference a vowel makes. A gamma ray is the main agent of destruction in weaponry designed for intergalactic conflicts and is also used to treat cancer. Replace the first ‘a’ with an ‘e’ however, and you have Gemma Ray, an English chanteuse based in Berlin who sings songs of heartbreak and loss.

So less cool than gamma rays (come on, lasers!) and arguably less useful (I mean, treating cancer…), even the music she ekes out of her vintage Harmony Rocket guitar reverberates at the everyday, unfashionable end of the electromagnetic spectrum. Yet for all this, her music still has illuminating and penetrative powers.

I first heard of Gemma Ray when I was scrolling through the list of upcoming gigs at the Northcote Social Club and saw a picture of a woman wearing a leopard print top sipping a glass of scotch whiskey. It looked like a still from Madmen or an old Bond film – of the Sean Connery vintage.

At first I thought it said Gamma Ray, which sounds like the name of a thrash band. I quickly realised my mistake, but this didn’t necessarily clarify anything. I hadn’t heard of Gemma Ray either, however, the publicity photo with its subtle signifiers of stylish licentiousness intrigued me enough to search her out on Spotify.

And I wasn’t disappointed. Her latest album, The Exodus Suite, oozes sassy blues and gothic noir laced with flecks of slinky guitar. The songs are brooding and atmospheric with Ray recounting dystopian torch songs in her rich, melancholic voice. Just my thing, so I bought a couple of tickets to her Northcote Social Club performance. 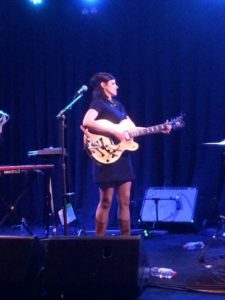 When the night arrived, my wife couldn’t make it so my friend Fiona joined me. We also we met up with several other friends at the show, but even so, it wasn’t crowded. In fact, without our contingent of eight, it would have been very sparse indeed.

When Fiona and I walked in, a reverent silence pervaded the room, except for the quiet voice of Martine from The Orbweavers singing a typically touching song, and Fiona and I at the bar haggling over who would pay for the drinks.

Sadly, we weren’t able to get there in time for the beginning of The Orbweavers’ set (children’s sporting responsibilities – I know, why can’t they just sit inside on their phones or watching YouTube like other kids), and in the end, all we got to hear was this one song.

The audience, small as it was, were rapturous in their appreciation for the Orbweavers and the friends we met at the gig all said they were fantastic. They were performing as a duo for this gig. The Orbweavers are one of Melbourne’s most unique bands, but have been noticeably quiet for a few years. Hopefully their presence at this show is a sign of renewed activity. 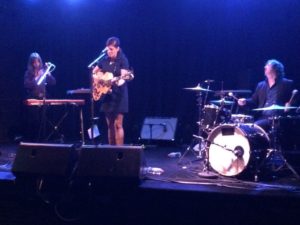 The room hadn’t filled noticeably by the time Gemma Ray took the stage. In fact, the people who had been sitting on the floor for The Orbweavers remained in sprawled repose. Quite aside from the rudeness of not standing when a guest enters the room, I was quietly appalled that anyone would want to sit on the grungy, sticky carpet of the Northcote Social Club band room.

Perhaps they would have stood had the rest of us moved closer to the stage to stand in front of them, but like the polite Melburnians we are, none of us wanted to be too confrontational. So we all just stood behind them. At one point two girls moved in front of them to engage in some interpretive dance, but even they felt self-conscious and retreated to the side.

Gemma Ray was accompanied by Andrew Zammit on drums and Gris-de-Lin on keyboards, vocals and other computery things.  Gemma looked sleek and stylish wearing an LBD and knee high tan boots, and had her hair done up in a mini beehive, what you might call an early Winehouse, but neater. She looked a little like a character from the Jetsons. It’s tempting to suggest that this neater coiffure hints at less of a bacchanalian tendency than the sadly departed Amy, but then most people have less of a dissolute Dionysian lifestyle and self-destructive streak than the late, great singer, so perhaps it is a little simplistic to read too much into their respective do’s.

Having said that, my friend Rebecca commented that she was glad to see Gemma had made such an effort with her hair. You know the artist is taking the performance seriously when they’ve spent as long shaping their coiffure as they have their songs – a statement, mind you, that doesn’t necessarily apply to the 80s.

And at the risk of sounding like someone with a footwear fetish, it is also worth mentioning that Gris-de-Lin outdid Ray in the footwear department with sparkling ankle length boots. What Amy might have called ‘Fuck me pumps.’ 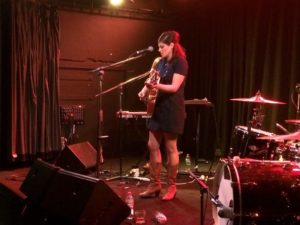 I don’t want to give the impression that the show was all style and no substance, because the band played a thoughtful and immersive set. Ray’s vocals were seductive and expressive and the band recreated the brooding gothic ambience and late night ennui that characterise the recordings.

Most of the set was taken from latest album, The Exodus Suite, opening with the haunting Come Caldera with its schlock organ soundtrack and the sleazy noir of There Must Be More Than This – sample lyric, “we break ballerinas’ bones” – in which Ray strummed suitably sinister chords on her guitar. 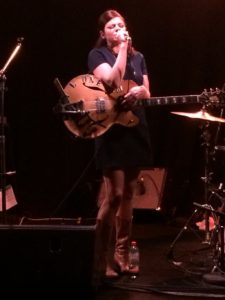 She dug into her back catalogue for If You Want to Rock and Roll from her second album, Lights Out Zoltar!  and Swampsnake, a grizzly blues stomp originally by The Sensational Alex Harvey Band. It appears on her covers record, the magnificently named, It’s a Shame About Gemma Ray, which is right up there with Amanda Palmer’s Who Killed Amanda Palmer for pop culture reference album titles.

Gemma’s sound carries a 50s/60s vibe, but more than just harkening back, she adds a modern take. And no one does haunting surf guitar quite like Gemma Ray on The Original One – it could have been Chris Isaak guesting. Fiona likened her sound to Jess Ribeiro, which is as good a reference point as any I might come up with.

She has a magnetic stage presence, however, as Fiona commented, she was self-effacing, and not worried about kicking shit out of her way or tossing her water bottle aside.

Her guitar has ‘LIL ONE ARM’ written in silver embossed lettering across the face. I don’t know if there is any deeper significance to the name, beyond the obvious fact that as a guitar it only has one arm, but at one stage she pulled out a large kitchen knife and sawed vigorously at its strings.

The set concluded with Caldera, Caldera, who Ray introduced as, “a Goddess I made up, and she’s a right bitch.” 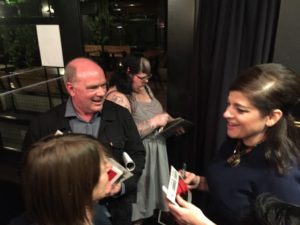 Gemma talks hair with Rebecca, while I watch on, my participation in the discussion necessarily limited. photo: Suzanne Peyton

She returned to the stage by herself for an encore of the haunting and eerie, The Switch, before the band joined her to play the old Leadbelly song, How Long and Flood and a Fire from her Island Fire album, which she said was partly written and recorded in Australia.

At the end of the show she joined us to sign posters, vinyl and cds at the merch stand. Rebecca got to compliment her personally on her hair and I mumbled away to her incoherently as I do when confronted by beautiful, talented people. As for Gemma, despite an imagination that sees her breaking ballerinas’ bones and inventing goddesses that are bitches, she’s perfectly charming.

Gemma was a ray of light on a cold Thursday night; and if there was any sort of shame about Gemma Ray, it’s that there was such a small audience to witness such a great show. 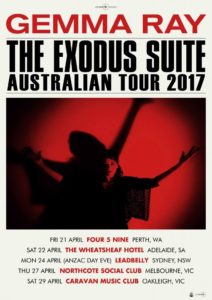 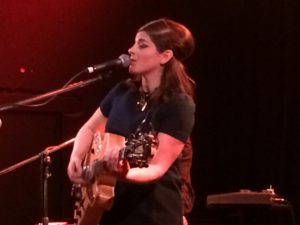 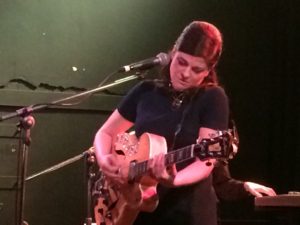 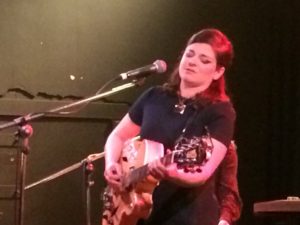 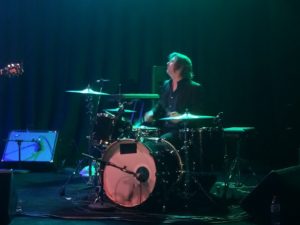