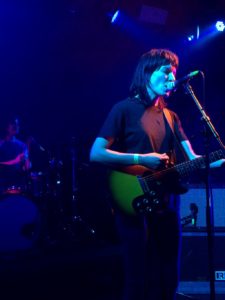 “Most critics are pussies who wanna look cool.
“Those who can, they do. Those who can’t, review”

…sings Jen Cloher on Shoegazers, a track from her latest self-titled album. I’m not saying she’s wrong, but it makes my job a bit awkward. I guess I’ll just fuck off then.

But I’m not really a music critic – I don’t know enough about music for a start, plus I generally resist using use the word ‘sophomore’ to describe someone’s second album. Also, I know my limitations and I no longer bother trying to look cool, as the olive green v-neck knit I was wearing on my way to this gig amply attests. So I’ll try not to take Jen’s comments personally.

Besides, also among those who can’t play are those who purchase records, pay to go to gigs, buy the merch, spread the word about artists and bands, and in the more ardent cases, procure drugs for their idols and offer themselves up as groupies. So we’re not all bad, and in the case of groupies, perform an essential role.

Jen Cloher was playing the second sold out night at Howler in support of her new self-titled album. The album continues the tougher rock approach that she forged on her previous album, In Blood Memory, but introduces some lighter, more subtle touches.

Lyrically it offers a candid insight into her relationship with fellow musician Courtney Barnett and lays bare her love, doubts, frailties and even career envy. For the listener, the upshot is that we’re virtually mainlining her id. To the point that, at times, she risks oversharing.

What made these songs more astonishing in the live setting was that Courtney Barnett was standing just to Cloher’s right providing the lead guitar touches. There were times that I thought Barnett might interrupt and ask Cloher to stop talking about her as if she wasn’t in the room. 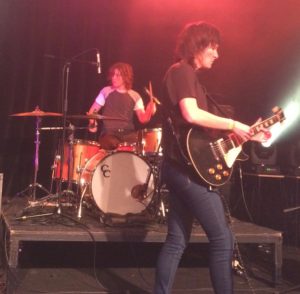 The first thing to say about this show is that it was great. The band: Jen Cloher and Courtney Barnett on guitar, Bones on bass and Jen Sholakis on drums were tight and powerful. In fact one of the main delights of the show was seeing just how good a guitarist Courtney Barnett is.

They opened with Hold My Hand, a beautiful, gentle song that rounds off the In Blood Memory album. It is carried by a simple guitar motif and a circular vocal chant that slowly intensifies as the song progresses, until the whole thing explodes in a gust of guitar.

I was standing near the stage trying to hold a beer and protect the vinyl copy of the album I’d bought at the merch desk. The whole time I’d been there three women were standing against the stage steadily drinking and embracing. When the band started up they began swaying, so I finished my drink and clutched my vinyl tighter so that I could keep them from knocking it. As the band began the bluesy Kinda Biblical, the swaying became more pronounced and a little less steady, to the point that I thought one of them was going to vomit onto Courtney Barnett’s nest of pedals. Happily one of the three led the ‘tired and emotional’ one away, and we never saw those two again. They were obviously big fans as they’d arrived nice and early to secure a spot right at the front, and having stood there patiently for more than an hour, only lasted one and a half songs.

The other friend remained and she too looked a little unsteady on her feet, so it was fortunate she had the stage to lean against. Her demeanour was as unsteady as her feet, for by the end of the night she had nearly come to blows with another girl who had squeezed in and was dancing to the music. I couldn’t tell if the intruder had knocked against her or said something out of turn, but for a delightful moment it looked like a good old fashioned scrag fight was about to ensue. The threat abated, however, as those of us nearby formed a cordon to protect the intruder, who even then didn’t seem inclined to let the matter drop. 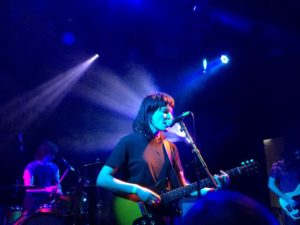 With all of this going on it would have been easy to lose focus on the band. However, Barnett’s guitar playing was exceptional, in particular her playing on Analysis Paralysis where she channeled Andy Gill from Gang of 4 to play a series of jagged, disjointed and distorted notes while driving the song’s momentum. Mostly she was content to remain in the shadows, this was Jen’s night after all, but she edged forward from time to time to provide backing vocals.

It was a real bonus to have Barnett in the band – not quite the same as Robert Smith guesting on guitar for the Banshees, which I saw at the Astor once, or Bowie sitting in on keyboards for Iggy, which my friend John saw in the UK, but as far as indie rock relationships go, this is our most auspicious pairing since Nick Cave and Kylie. 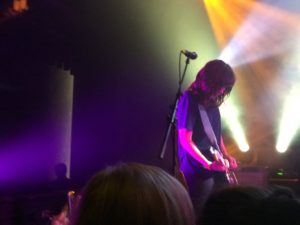 Cloher was also in fine form, her singing was perfectly controlled and modulated, from the sneering tones of Mount Beauty to the quiet melodic notes of Regional Echo, and the wild caterwauling that ended Great Australian Bite.

She chatted amiably to the audience, joking about the same sex marriage plebiscite and only taking slight offence when she thought she’d heard someone shout out something that included the C bomb. I heard it too and it was a brave man who would risk shouting that out at a Jen Cloher gig. Someone else asked loudly whether she and Bones shared the same hairdresser, which confounded me a little, because surely it is obvious she has the same hairdresser as Ron Wood. In fact if there is ever a musical based around the Rolling Stones, she should be approached to play the rhythm guitarist. I know several Stones fans who would rather she replace Ron Wood in the actual band. 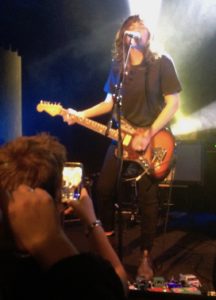 In the meantime, she is carving out a solid career of her own, making strong albums of songs that are part confessional and part social commentary. Great Australian Bite addresses the question of cultural cringe and the battle faced by Australian musicians, which is odd only because standing next to her on stage was someone who had largely bypassed any such struggle and is now the face and voice of indie Oz rock.

Regardless of whether Cloher gains the same accolades as her partner, I suspect she’ll continue writing songs and making records, because as she sings in Shoegazers, “Those who can, they do.” On the evidence of her two latest albums and this excellent live show, I hope Jen Cloher keeps doing it for awhile yet. 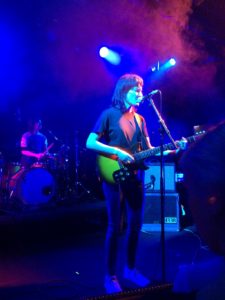