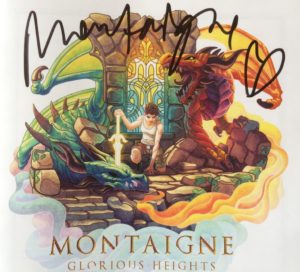 Montaigne opened her set on Thursday night with the song I’m a Fantastic Wreck from her Life of Montaigne e.p. It was a dynamic opening with Montaigne in fine voice and the band giving full rein to the song’s demented abstract dissonance.

At its conclusion she wondered aloud why she had opened with her best song, but hastened to assure us that she had many more good songs from her ‘ARIA nominated album’ that she was about to play.

It’s understandable that she was a little chuffed about being nominated for an ARIA, even if it does mean sitting through a three hour awards ceremony – at least there’s free drinks. However, at the precise moment Montaigne was congratulating herself on her ARIA nod, my phone buzzed with a Guardian news alert informing me that Bob Dylan had just won the Nobel Prize for literature. This rather put her ARIA boast into something like perspective. Hmm, ARIA nomination versus Nobel Prize – I wonder which is the more brag worthy and prestigious accolade?

Surely, when a song and dance man, as Dylan once described himself, wins the Nobel Prize for literature, all other music awards become instantly redundant. As if she knew what I was thinking, Montaigne then played Greater Than Me. Well yes, my point exactly.

Don’t get me wrong; I like Montaigne, otherwise why would I be at her show? But let’s face it, like everyone else who has ever written or recorded a song, she’s no Dylan. Of course some might argue – with some justification I suppose – that she’s a superior singer, but that would be to miss the point. Just as those arguing that Dylan shouldn’t win the Nobel Prize because he doesn’t write books also miss the point. 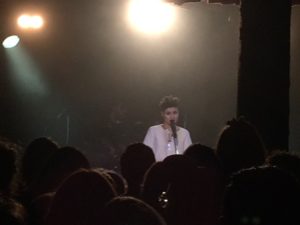 I first heard Montaigne in her guest vocal spot on the Hilltop Hoods’ song 1955, in which she pretty much stole the show. I listened to her other material and was impressed not only by her voice, but also by the originality of her arrangements. On that basis I bought a ticket to her show.

I don’t think the album, Glorious Heights, necessarily lives up to its predecessor, let alone its own name, but there are still plenty of good moments on the record.

Live, her vocals were strong and impressive and her voice was nice and high in the mix. My only quibble is about all of her other voices that were also in the mix. With an over reliance on pre-recorded backing vocals washing through the mix, there seemed to be a multitude of Montaignes in some songs.

I know it’s a thing these days and that using enhanced vocal programming doesn’t turn you into Milli Vanilli or the singing version of Lance Armstrong. And I realise it’s more cost effective than dragging backing vocalists across the country just to sing the occasional ‘doo-wop’ – after all, that’s also why George Michael dispensed with Andrew Ridgley and broke up Wham! It also means that the backstage rider stretches further. The point is that Montaigne doesn’t need such enhancement. Her voice is rich and resonant and capable of carrying pretty much any song by itself. I wouldn’t put it past her to sing the banked operatic vocal bridge of Bohemian Rhapsody unaided.

This isn’t to say she used it in every song. For Lonely she enlisted the help of the audience to sing the respective chorus lines. Dividing the audience in half, she gave one side of the room a set of lines that were reasonably repetitive and easy to remember, and the other side an altogether more complex arrangement. Needless to say I was in the second group. It’s probably not unfair to say that we rather let down the whole. Happily – and this is where I reinforce my point – we had Montaigne to sing the lyrics herself. Which she did, more than making up for the inadequacies of the remaining 500 or so people in my half of the room.

I was standing up the back near the mixing desk, so my view of the stage was somewhat restricted. I could pretty much just see her head and shoulders. I know there was a band up there because I could hear them, but I couldn’t make out who they were and what instruments they were playing. It looked like mainly keyboards though.

This didn’t really detract from the show because Montaigne is the star and she brought to her role the necessary sass as well as her great set of pipes. But beyond this, she also exuded a friendly and cheerful stage presence and seemed genuinely pleased to be headlining. And even more excited to have her own line of merch. Fair enough too – that’s better than an ARIA nomination any day! The most popular item seemed to be the t-shirt with ‘I AM A FANTASTIC WRECK’ emblazoned across the front, which I might have bought but to wear that message across my chest would simply be an exercise in expressing the self-evident.

Because We Love Her

She changed down the mood with the moving Consolation Prize, the sort of power ballad that I wouldn’t be surprised to hear Celine Dion or Adele sing one day, albeit with considerably less restraint than Montaigne.

The set concluded with a trio of singles from the album, In The Dark, Till It Kills Me and the impossibly catchy Because I Love You that she explained was intended sarcastically – just in case anyone was thinking of playing it at their wedding. Regardless, the audience joined in enthusiastically. Montaigne may not have meant it literally, but the bulk of the audience did.

For the encore she played I Am Not An End followed by Clip My Wings, a driving rhythmic number that without recourse to pre-recorded backing vocals, highlighted Montaigne’s powerful voice and her talents as a performer. This was probably the highlight of the set. She may be no Dylan, but then even Bob is hardly Dylan these days – he sings Sinatra songs for a start.

Not that Montaigne is bothered; as she herself sings, “Ten thousand men stand before me, I can’t pretend they don’t bore me.” Touche! 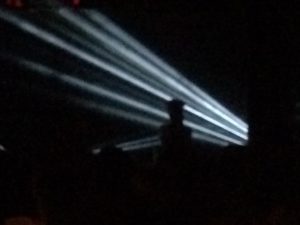 In the dark indeed.