ONE MORE TIME WITH FEELING The sombre mood that had gripped Melbourne since the Bourke Street killings a week earlier was slowly beginning to lift and discrete tribes of people converged on the city to pursue their respective pastimes.

The early evening crowd gathering around Fed Square represented an assorted mix of diverse interests: the tanned and moneyed middle class dressed in brightly coloured leisurewear were on their way to Rod Laver Arena to watch Serena and Venus Williams contest the Women’s Final of the Australian Open Tennis. The Asian community in festive mode and Saturday best were getting ready to celebrate the Lunar New Year, and the pierced, grubby goths and affluent former punks were on their way to see Nick Cave and the Bad Seeds play the second of their Melbourne shows at the Sidney Myer Music Bowl.

I was amongst the latter, although, truth be told, I’m neither pierced, grubby nor particularly affluent. I met Ralph and John at Riverland, a bar on the banks of the Yarra. Ralph and I were backing up for our second Nick show after Ballarat, while John, another veteran of many past Cave gigs was also joining us.

Here we ran into another group of revellers, for part of Riverland was partitioned off for the exclusive use of Chantelle’s hen’s night. In this section about 20 women of various vintages wearing floral crowns were enjoying the camaraderie that only impending nuptials and multiple margaritas can inspire. And as we ascended the stairs to make our way to the Bowl, a different group of hens wearing sashes denoting their role in the wedding party pushed their way past us for the next stop on their own pre-nuptial pursuit of happiness. I suppose that this abundance of hens was appropriate as the city geared up to celebrate the lunar New Year and the Year of the Rooster ahead.

I suppose that seeing The Necks twice in succession technically constitutes a Neck brace.

The Necks were already immersed in their music by the time we ascended the grassy knoll and peered down over the expanse of lawn. The open-air of the amphitheatre created something of a sound delay, which didn’t exactly help this type of freeform composition. However, the main problem was caused by our tardiness, as coming in mid-piece was a little disorientating.

In Ballarat, where I heard the piece in its entirety, it made complete sense and sounded great. But coming in half way through made it difficult to get a foothold in the music; the individual tendrils of piano, bass and percussion were getting tangled and knotted, rendering it hard for me to follow. It was like opening Ulysses at a random page and trying to work out what was going on.

Still, the sound improved as we made our way to the seats in the front section and the more of the piece I heard the more sense it began to make. I was just beginning to enjoy it when it ended. 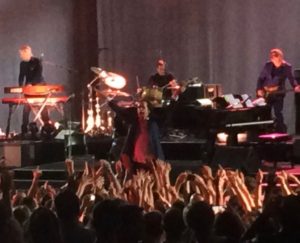 The Bad Seeds were on stage and already at work generating the low drone of Anthrocene before Nick himself wandered on from behind giant billowing curtains, an arm raised in acknowledgement of the wild adulation that greeted his appearance.

It was a repeat of the show we had seen in Ballarat, with the band playing the same songs in the same sequence. Jesus Alone and Magneto followed, creating what my friend Michael, who had been to the previous night’s show, succinctly described as an ‘intense’ opening. It might have been even more intense had the people sitting behind us not felt the need to yak loudly all the way through it. To the point that John had to ask them if they wouldn’t mind being a bit quieter, although he might have just told them to ‘shut the fuck up.’

Even if the band was performing the same songs, the show was still fresh and energetic. And after all, being part of a Nick Cave live performance remains one of the most exhilarating musical experiences you can have, short of a night on the town with Rhianna.

Ralph wandered down to the front but rather than straining for a view between heads and shoulders down the front, John and I stayed in our seats – which were about 20 rows back – in fact just two seats along from where I’d watched PJ Harvey the previous Saturday. We even ran into our friends and long-time Cave fans, John and Helen.

After the heat, crowd jostling and foot fatigue of the Ballarat show, it was comparatively relaxing to take in the show from a comfortable seat – as relaxing as it can be I suppose when you’re listening to Nick’s morose monologues about dystopian nightmares, which is still preferable to the inane chatter of the people behind us. As Nick sang, or rather recited Magneto and referenced ‘the stars splashed and splattered across the ceiling,’ I looked up beyond the Bowl’s canopy to see the celestial equivalent in the night sky.

The Bad Seeds themselves were largely immobile on stage – even Warren Ellis barely moved. This left all the focus on Nick as he stalked from one side of the stage to the other, pausing only when he leant in to harangue a section of the crowd near the front, goading them to come closer and picking out someone at whom to direct an accusatory pointed finger as he delivered a vocal barb.

A forest of arms reached out for him like tendrils, some trying to hold him up while others worked to drag him into their midst. During Higgs Boson Blues he was pulled into the swarming arms of the masses down the front and snatches of verse went missing as he tried to regain his feet – the trip to Geneva taking longer than usual on this occasion.

The Six Strings That Draw Blood 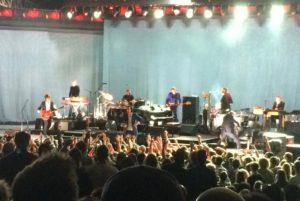 From Her to Eternity is always a live highlight and as in Ballarat, the song signalled the band’s expedition into their back catalogue. It is a song of intense paranoid obsession, or stalking in the modern parlance. Musically it is driven by a repetitive percussive keyboard motif played here by Conway Savage, and ragged, dissonant explosions of noise, courtesy mainly of Warren Ellis shredding his violin. It also provided a rare opportunity for guitarist George Vjestica to amp up the distortion.

As far as guitarists go, Vjestica occupies an unassuming presence. He stood towards the front with his legs apart strumming quietly and adding the occasional backing vocal, but he doesn’t have quite the presence of Blixa Bargeld. To be fair, not many people do.

He is in an unenviable position, for ever since the legendary axeman and noise merchant Blixa Bargeld left the band sometime in the early 00s, the Bad Seeds have had a fraught relationship with guitarists. They have been through nearly as many guitarists as Australia has had Prime Ministers in that time, with Mick Harvey, James Johnston and Ed Kuepper all having left the band. The Bad Seeds, it seems, have a similar relationship to guitarists as Spinal Tap do to drummers. Who knows whether we’ll see George again.

As was the case in Ballarat, Jubilee Street was the rousing highlight of the night. We also sang as one during Into My Arms, except that on this occasion I had a tuneless bloke in my ear rather than the girl with the angelic voice from Ballarat.

There were some differences, however; this time Nick remembered all of the words to Red Right Hand. Plus, after Warren Ellis’ violin solo to conclude Distant Skies, Nick stepped down from the piano and gave him a big hug and a kiss.

That’s ‘Sir’ Saint Nick To You 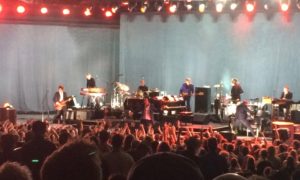 The encore provided another difference, the band opened with People Ain’t No Good, after which Nick made the startling revelation that he had changed his view since he wrote the song. What! Nick thinks well of people? What sort of post-truth, fake news thing is this? If not for the overwhelming amount of love in the room for Nick, such an admission had the potential to alienate the misanthropes in his fanbase, in the same way that folksters swore off Dylan when he plugged in.

Perhaps the news two days earlier that he had been awarded an Officer of the Order of Australia in the Australia Day honours list had changed his view – he’d gone all establishment on us. I wonder if the band is going to change their name to Nick Cave AO and the Bad Seeds?

Nobody’s Baby Now was begun but quickly abandoned, even before the first vocal cue, when the band realised the time. At the side of the stage people were gesturing at watches and holding up fingers to indicate how many more songs could be squeezed in before the Bowl’s 11pm curfew. No one was disappointed when instead of the ballad, Martyn Casey thrummed the familiar bass riff for Stagger Lee and Nick began to recite his violent tale of murder, revenge and gratuitous fellatio – eloquently, if a little sordidly, rebuffing any suggestion that his Australia Day honour had in anyway changed him.

In fact Nick may well be the only recipient of an Order of Australia to bellow into a microphone that he’d rather, “crawl over fifty good pussies just to get to one fat boy’s arsehole.” Probably not the first to think it, but certainly the first to declare it. Reason enough then to bestow the honour on him. 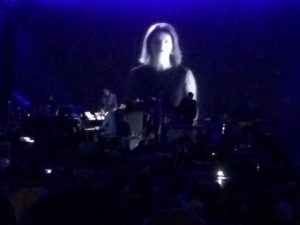 The show concluded with Push the Sky Away, a soft, slow hymn and affirmation of life that captured the mood of the evening. As the band wound down Nick raised an arm and walked off to the rear of the stage as if to exit. He evidently thought better of it, however, because he returned for another wave of acknowledgement, thanking the audience again and saying how much it meant to him.

Ralph and I sensed an air of finality in the way he bid farewell to the audience. Had we witnessed Nick Cave’s final show in Melbourne? Was he now retiring from music and resting on the laurels of his AO? Probably not – he’ll be back next summer for a new tour.

A number of people view Nick Cave’s music as morose and depressing, or even violent and misogynistic. But in this post truth world of fake news and uncertainty, the rise of the right and breakdown of the rule of law, his story shows what is great about this country. If someone who could reportedly rival Keith Richards for substance abuse, and who once danced dementedly around Hawthorn tip in a nappy with ‘Porca Dio’ (God is dead) painted on their chest while carrying a pig’s head can be made an Officer of the Order of Australia, then there is cause for hope. Australians all let us rejoice…

Nick Cave: One More Time With Feeling film and live at The Plenary Dec 2014