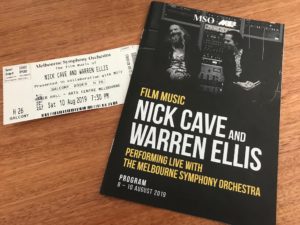 The polar vortex that brought a blast of icy cold weather with rain and hail to sweep through Melbourne over the weekend set the mood for this performance of Nick Cave and Warren Ellis’ film scores. The duo have composed several bleak and haunting film soundtracks that conjure the barren landscapes and lawless societies in which the accompanying movies are invariably set.

In a piece of inspired casting, they were teaming up with the Melbourne Symphony Orchestra for a rare, possibly first ever live performance of excerpts from their various soundtracks as part of the Melbourne International Film Festival.

Two shows sold out quickly and the run quickly expanded to four or five shows. I was there with John for the Saturday evening performance. We met at Fatto bar with our youngest sons who were heading off to see Hilltop Hoods at Rod Laver Arena.

Our seats were in the upper reaches, so we were looking down on the orchestra. The 50+ person orchestra was accompanied by a 40+ person chorus who sat arrayed in bleaches like a tribunal or council overseeing proceedings, until they were required for massed choral tones.

Conductor Benjamin Northey appeared to general applause before Nick and Warren wandered on to wild cheers.

Warren took up his violin and Nick was on vocals for the opening suite from The Proposition. Nick moved between piano and microphone, occasionally rearing backwards to urge on the musicians with his raised arms before realising they had their own conductor.

A triptych of screens above the orchestra alternated between excerpts of the films and black and white close ups of the musicians playing. 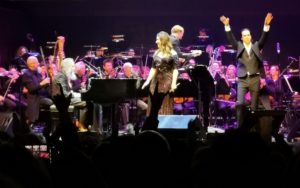 Much of the music consisted of minimalist motifs and a shimmering and shifting orchestral drone that ebbed and swelled in slowly rolling sonic waves. The sound was rich and full by the time it reached those of us up in the balcony.

In particular the sparse beauty and dark soundscapes of The Road and the main theme from The Assasination of Jesse James by the Coward Robert Ford were so utterly mesmerising and transcendent that I wasn’t the only one wiping away a tear.

At one stage Nick disappeared and returned with soprano Antoinette Halloran who added some vocal polish to the section from Wind River.

There was no film footage to accompany the final suite from The Assassination of Jesse James by the Coward Robert Ford. Perhaps they were unable to obtain the rights, but it worked well to leave us alone with the music as it engulfed the auditorium and our senses.

For an encore Nick and Warren returned with Antoinette Halloran for a rendition of the Bad Seeds’ Push the Sky Away. If there is something counter-intuitive about seeing such punk roustabouts as Nick Cave and Warren Ellis taking their place among the respectable musical establishment, they have done so without sacrificing any of their creative or artistic ideals and through extraordinary inventiveness.

This was a sublime concert experience. Bleak has never sounded so beautiful.