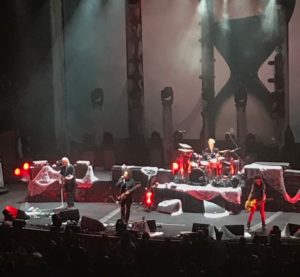 It may seem a misnomer to ‘celebrate’ an album that wallows in such a morass of misery and gloom as The Cure’s Disintegration, but here were John and I ascending the steps of the Sydney Opera House in a buoyant mood ready to pay homage to one of the world’s most distinctive bands and what many consider to be their finest hour (and a bit).

John and I had scored tickets in the ballot for the third of five special Vivid Festival shows in which The Cure were to mark the 30th anniversary of their Disintegration album by playing the album in full. The tickets were very hard to come by and like the other people gathering in the foyer, we teamed our shapeless black goth gear with an expression of insufferable smugness.

Sure, we had seen them less than two years earlier in Melbourne when they had played eight of Disintegration’s 12 songs (10 if you go by the original vinyl), but we weren’t about to let that lessen our sense of superiority for being here on this special occasion.

We procured a Merlot and wandered into the specially themed Spellbound Bar that featured a DJ playing goth tunes and long tables bedecked with flowers and fruit to give the place the look of a Dionysian feast. The crowd covered the age spectrum from 20 somethings to 50 somethings, and there were even several pre-teens accompanying their parents. Despite the music we were about to hear, an expectant, festive hubbub filled the foyer.

Disintegration is by no means The Cure’s most claustrophobic and miserable album, for that look to Faith (1981), Pornography (1982) or even Bloodflowers (2000), but it still contains such cheery bon mots as, “I think I’m old and I’m feeling pain you said, and it’s all running out like it’s the end of the world you said, and it’s so cold like the cold if you were dead…’  and that’s just the opening track, Plainsong. 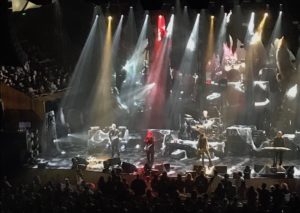 However, with a conservative right-wing party re-elected to government just two weeks previous, John and I were in just the mood for the sort of sombre tones and existential angst that is The Cure’s stock in trade.

Our seats were towards the rear of the hall in the circle, but the main concert hall at the Opera House is not overly large, so we still had a good view. The equipment on the stage was strewn with white netting artfully draped to look like cobwebs in a haunted house, while speakers piped in the sound of drizzle and distant peels of thunder. So far, so goth. The people sitting next to us had flown in from LA for the gig. Flying across the world for a gig shows a strong level of commitment but maintaining the goth look in sunny LA is perhaps even more impressive.

The first night the band had played the album in full followed by a set of B-sides and demos from the same year. Most of the reviews suggested that the gig tended to drag once they finished the Disintegration album and started on the 30 minute set of obscurities. Robert Smith must have agreed because they mixed it up a bit the next night by playing the B-sides first. 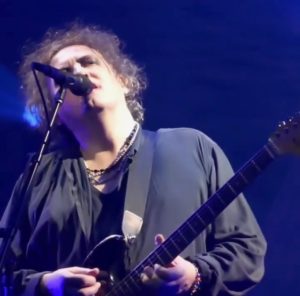 They continued this approach on this, the third night. The band sauntered on and launched into a series of B-sides and demos. It was Robert Smith on guitar and vocals, Simon Gallup on bass, Reeves Gabrels on lead guitar, Jason Cooper on drums and Roger O’Donnell on keyboards.

For the most part, these pieces were entirely unknown by the audience. Some of them had never been released or even played live prior to these shows. While they contained trademark Cure tropes of the era, they were clearly sketches and outtakes, however, judging by the dancing in the aisles you’d have thought these pieces had all been massive hits. I have the 12-inch singles of Lullaby and Lovesong and I didn’t recognise any of the songs. Admittedly, it’s probably been 30 years since I heard them.

After a short break the band were back for the gig proper, with the main concert hall of the Opera House filled with the stately grandeur of Plainsong. The show had all the attributes you’d want from a Cure gig, Smith’s anguished falsetto, Gallup in almost constant jog with the bass guitar slung low at knee height, and an evocative rendition of Pictures of You. 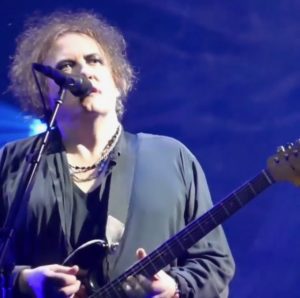 Despite the fact that it was an album show and we all knew in advance the exact sequence of the setlist, the audience still roared in recognition as the opening chords of Lovesong and Lullaby rung out. Another roar went up when Smith gave a little jig during Lullaby.

Fascination Street was delightfully raucous before they rung in the gloom of side 2 with dense, heavy versions of Prayers for Rain and The Same Deep Water as You.  Disintegration was a glorious maelstrom of Gabrels’ squalling feedback and Smith’s impassioned screeching.

The music was dense and the mood intense; the band teasing out every doom-laden nuance and plaintive tone of the songs. This was the high point of the show, before they eased us down with Homesick and created a peaceful plateau to end the set with Untitled.

Of course, being a Cure gig, it’s not over ‘til it’s over. When they returned Smith begged our indulgence while they played songs recorded in the Disintegration era. “I’m sticking to my guns” he said and launched into Burn from The Crow soundtrack. 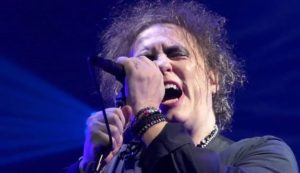 He relented however, and acknowledging that it was also the 40th anniversary of their first album, they gave us a breezy rendition of its title track Three Imaginary Boys. Despite Gabrels’ presence on guitar and it also being the 30th anniversary of Tin Machine’s eponymous release, sadly they didn’t see fit to follow up with any of that album’s abrasive ditties. Instead they played another Disintegration era obscurity, Pirate Ships.

By Cure standards it was a relatively brief two hour show, but listening to their towering masterwork made it as intense as any of their epic three plus hour sets.

No one needs an excuse to visit Sydney, but a performance by The Cure provides one of the best there is. They opened the show with Delirious Night, and certainly made good their promise. 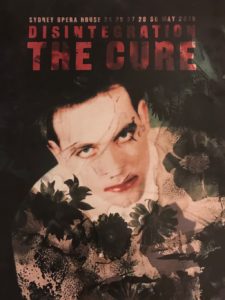 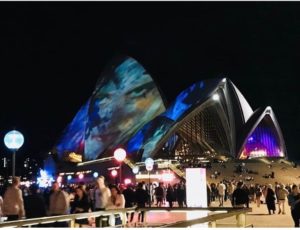