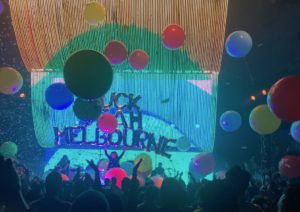 Giant inflatable pink robots, communal karate chops, blow-up rainbows, bouncing balloons, confetti cannons, psychedelic strobe lights, an on-stage marriage proposal and a happy birthday singalong for the drummer – it could only be a Flaming Lips gig. Oklahoma’s finest were back in town for the Melbourne International Arts Festival to celebrate the 20th anniversary of The Soft Bulletin album released in 1999.

John and I had seen them only a couple of years ago at the Palais, but the chance to hear them play The Soft Bulletin lured us in again and even though we are familiar with their various performance tropes, they are always hugely enjoyable to see live.

There’s a satisfying mix of the high-tech and homemade about the Flaming Lips’ various props. Amidst the synchronised strobe lighting, video displays and sophisticated sound equipment, Wayne Coyne wandered out five minutes before show time to gaffer tape a bunch of flowers to the mic stand. It’s something that probably could have been done earlier, but it got him an early cheer from the growing audience pushing through to their seats.

Our seats were about 15 rows from the stage so we were in good position for balloon punching and any other audience participation activities required of us.

They opened with cover of Richard Strauss’ Also Sprach Zarathustra, which is perhaps better known as the theme from 2001: A Space Odyssey, but which served here as a suitably grandiose introduction to The Soft Bulletin. They did it justice as well.

The Flaming Lips are well known for putting on giant kids’ parties for adults and it didn’t take long for the madness to start. A few bars into The Soft Bulletin’s opener Race for the Prize and suddenly the auditorium was awash with confetti, hundreds of giant balloons and a multi-coloured, morphing psychedelic light show. 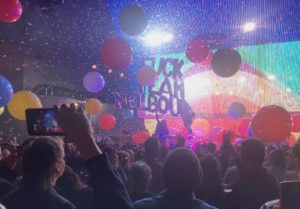 Behavioural psychologists would take a lot of learnings from watching the sheer delight on the faces of 2,500 over 50s reaching out to pat balloons, catch confetti while singing along to a song about two scientists competing to find a cure for an unnamed malady.

Coyne emerged from backstage brandishing a gigantic silver inflatable ‘FUCK YEAH MELBOURNE’ sign that he tossed into the audience to be passed about and ripped apart as people souvenired individual letters. The guy three rows in front of me spent a god deal of the show with a silver ‘O’ hanging around his neck.

Over the course of the first half dozen songs, including the sublime A Spoonful Weighs a Ton, the audience, roadies and even band members were kept busy punching away balloons, throwing confetti and passing on the FUCK YEAH sign to the next row, all while an elaborate light show blazed away and the band played some of the most transcendent pop music from the end of the previous century. It was a masterful display of distraction and sensory overload.

Coyne was wearing in a surprisingly sober three piece suit which set off his impressive mane of grey hair. His voice was sounding good though. Steve Drozd, wearing a rainbow cape, was coaxing weird sonic gloops and symphonic washes from his guitar and keyboard. There was keyboard player sitting on the floor for some reason and dual drummers pounded away in the rear. 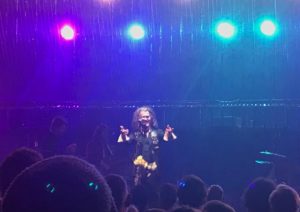 The Soft Bulletin is an incredibly rich tonal tapestry even without the various showbiz distractions. Eventually the balloons settled in nooks, the confetti stopped fluttering and we were left with something like a conventional rock show with just band, light show and audience.

And we were definitely part of the spectacle. Between each song Coyne urged us to keep screaming, keep making noise, to do whatever we wanted so long as we did it loudly. The Lips thrived on noise he said. And his exhortations worked for I’ve never heard such a constant crowd din inside the normally sedate environs of Hamer Hall.

We were called on to make buzzing noises for Buggin’ and even though Waitin’ for a Superman is ‘heavy’ we were invited to scream through it if that was our wont. Coyne and Drozd performed this as a duo and it was the emotional heart of the show.

They recreated the textures and layered sounds of the album with powerful intensity, from the glam rock stomp of The Gash to the denouement of the album’s closing instrumental Sleeping on the Roof. 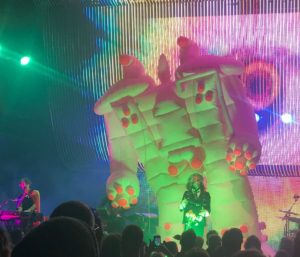 After completing The Soft Bulletin set, the roadies appeared on stage and busied themselves with a massive plastic inflatable. It grew before us into a gigantic pink robot and there was no mistaking the next song. When the band returned to the stage, the familiar strum of Yoshimi started up as the inflatable robot with what looked like multiple teats, or sockets I suppose, loomed over Coyne. We all joined the first “Ha Ha!” karate chop noise, however we were clearly not up to standard. Coyne had to stop the song and explain that at a Flaming Lips show, unlike other shows, we are dutybound to deliver a convincing and loud karate chop at the designated moment. “Think of it as an indication of how the rest of the night might go. Or how the rest of your life might go” he said. And with that the song restarted and the Hamer Hall audience delivered a series of loud and convincing karate chop sound effects replete with actions. The woman next to me was closer to 70 than 60 and she was giving it every bit as much as Bruce Lee ever did.

The Lips then paid tribute to Daniel Johnson by playing a cover of True Love Will Find You in the End followed by Are You a Hypnotist? After another pause while the road crew inflated a giant rainbow arch the band returned with Coyne nudging a couple forward to centre stage and giving a mic to the male, who gave a short speech and proposed to his partner. In slapstick fashion he dropped the ring which Coyne had to fish for amongst all the strewn confetti on the stage. She said ‘Yes.’ Personally I think public proposals are a bit naff, but perhaps a Flaming Lips show is the only place I’m prepared to accept one. 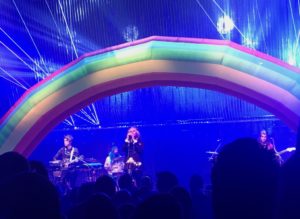 Then we all sang ‘Happy Birthday’ to drummer Matt Duckworth before the band launched into their profound singalong anthem Do You Realise?, a song that manages somehow to be life affirming even as it denies the reality of sunsets and points out that everyone we know, someday, will die. I just hope I’m still around for the 20th anniversary show of Yoshimi Battles the Pink Robots in a couple of years. 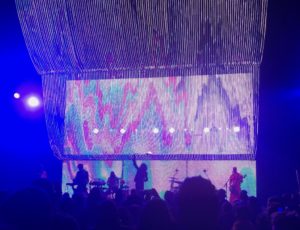 Race for the prize
A Spoonful Weighs a Ton
The Spark that Bled
The Spiderbite Song
Buggin’
What is the Light
The Observer
Waitin’ for a Superman
Suddenly Everything Has Changed
The Gash
Feeling yourself Disintegrate
Sleeping on the Roof
—————–
Yoshimi Battles the Pink Robots Pt 1.
True Love Will Find You in the End
Are You a Hypnotist?
—————–
Do You Realise?