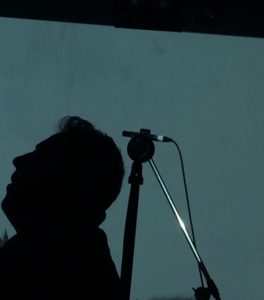 Ye olde Melbourne music fans were spoilt for choice on Friday night. If you were feeling nostalgic for the 80s you could catch the Models at Ding Dong Lounge, those nostalgic for the 90s could see Underground Lovers at NSC, while those who are living in the relatively recent 00s could see Gareth Liddiard at NGV – with the bonus of a few 19th century Van Gogh daubs to go with it.

To the charge that the audiences for these shows are living in the past, I counter that the Models remain timeless, except perhaps for Barbados, Underground Lovers were launching a brand new album, Staring at You Staring at Me, and Gareth Liddiard is still very much in the first phase of his career – with The Drones’ break-up and eventual reunion shows were still far into the future. Besides no one was criticising art lovers at the NGV for liking old stuff.

Music fans wanting to catch up with the current could stay at home and watch Eurovision, where Australia’s magnificently named Isiah Firebrand was performing.

Friday night drinks and dinner meant that we missed the support acts, but we were there in plenty of time to catch the Lovers, or the Undies as they are affectionately, if unfortunately, known in some circles.

I was there with my brother Graeme and the two Johns, plus we ran into old friends Amanda and Frank near the front. The NSC was living up to its name.

The Underground Lovers took the stage in front of a video backdrop that flashed colours, patterns and a series of random images throughout the show. 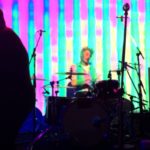 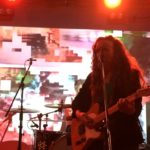 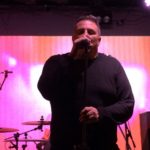 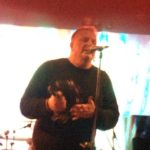 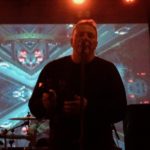 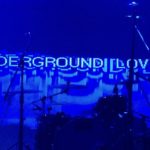 The video display covered the entire back wall which meant the band members were in silhouette for the bulk of the show. Doubtless this pleased guitarist Glen Bennie who hides up the back whenever possible. In fact, he began this gig sitting down on the drum kit platform, virtually behind the drummer.

Perhaps he sat down to make room, for there were six people crowding on to the small stage. The band opened with Unbearable, one of the lead off singles from the new album.

In fact the first four songs were all from the new album. Philippa Nihill took the vocal for album opener, St Kilda Regret, which opens with a football reference, “I love my team but not after what they’ve done to me,” a sentiment with which many St Kilda fans might concur after some of their Grand Final failures. But I too agreed, particularly after St Kilda beat my team Hawthorn by 86 points just two weeks earlier. She was in fine voice, too, as was Giarusso who sung with his customary verve, all the while rolling his shoulders, shaking his head from side to side and striking a tambourine. 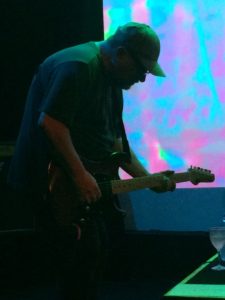 I’d been playing the new album all week in the lead up to the show and was thoroughly enjoying it. It’s more consistent than their 2014 comeback album, Weekend. Each track fizzes and crackles with energy and intent. Richard Andrew on drums and Maurice Argiro on bass make a formidable rhythm section, with Argiro’s expressive bass providing a melodic line while Glen Bennie adds great slathers of guitar over the top. You can still detect, however, the soft layers of melody that gurgle beneath the sound’s crust.

Oddly perhaps for an album launch, the album wasn’t available – at least not in vinyl form.

After this opening quartet of new material, the band served up a mixed platter of songs from across their entire career. Philippa Nihill delivered a strong vocal over the low drone of I Was Right from 1992’s Leaves Me Blind, while Giarusso let rip with The Lie That Sets You Free from 1998’s Cold Feelings as well as Can For Now and Au Pair, the two most exuberant tracks from Weekend.

They closed the set with a duo of songs from 1994’s Dream it Down. As Giarusso sang wistfully of cigarettes during Las Vegas, he extended two fingers into the audience whereupon the guy in front of me took one from his pack and inserted it between the proffered digits.

Dream it Down was the final song of the set, a perfect wind down song that showcased Bennie ’s evocative guitar line and gave Giarusso plenty of scope to puff away between his la la la’s.

They returned to play The Rerun, a stomping glam number with a dirty bass line It’s my favourite track from the new album and indeed, could even be a soundtrack to the Lovers’ reboot. They kept the mood going with In My Head and Feels So Good to be Free.

A second encore was called for and despite fearing that they’d get into trouble, the band ripped into a blistering The Conde Nast Trap, also from their new album.

This was a great show, the music exuberant, intense and freewheeling and I look forward to the vinyl edition of the album.

The Rerun
In My Head
Feels So Good To be Free